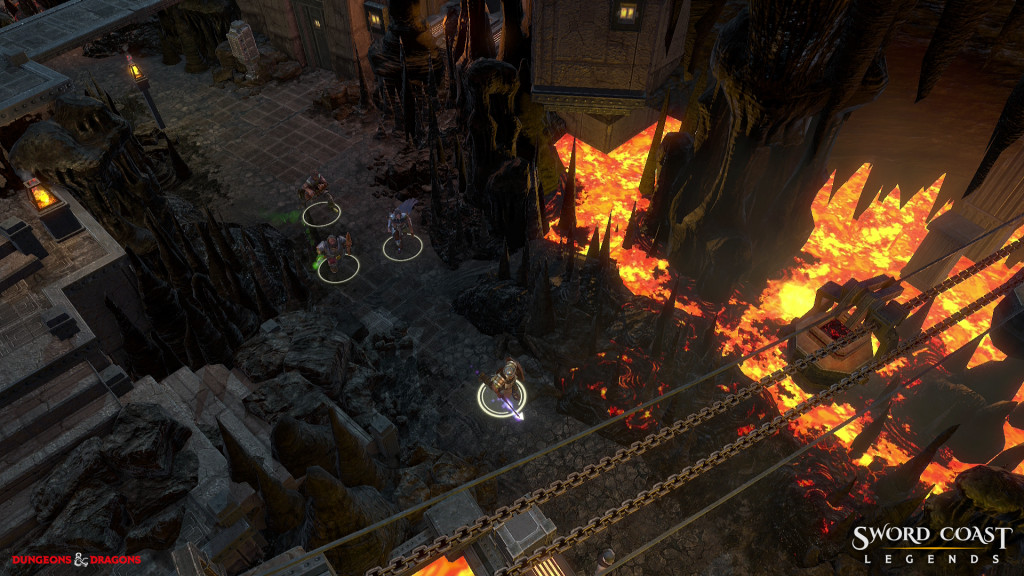 Most video game RPG players are familiar with elements found in tabletop RPGs: focus on story and character development, character progression, equipment improvement and the like. Still, one of the big draws to in-person, tabletop gaming is the interaction between the dungeon master and the players, and the conversations that take place between players as the party decides how to handle the obstacles in front of them. Hasbro and Wizards of the Coast worked together to create a virtual answer to the situation with Sword Coast Legends: a game that combines an action-RPG with the mechanics and system of 5th Edition Dungeons and Dragons.

Sword Coast Legends features two separate modules: Player, and Dungeon Master. Many players interested in Sword Coast Legends will want to start in the Dungeon Master mode off the bat, but starting with the campaign helps potential DMs better understand the experience they’re designing for their players. Sword Coast plays like many computer RPGs; the action takes place in real-time, but attacks and functionality are powered by simulated background dice rolls like Knights of the Old Republic. Players can pause the action at any time to change targets, choose spells, or even just chat with each other or make plans. The engine that powers the machine is still 5th Edition Dungeons and Dragons, though they make some adjustments to suit the computer gaming crowd.

All gameplay takes place in a section of land in D&D mythology called the Sword Coast, a hundreds-of-miles long stretch of land present in West Faerun. That may not mean much to those outside of the D&D circuit, but gameplay in Sword Coast Legends is meant to feel intentional, taking the character creation process, monsters, and spells straight out of 5th Edition game manuals. It’s handy for those who don’t have a working knowledge of the multiple hardcover manuals which provide all the information about the world of Dungeons and Dragons (or the money to purchase them), and it involves far less page-flipping as well. Access to all the races, alignments, and classes you’d expect are available, and though the character creator felt limited in terms of character voices, it’s fairly easy to create a character that looks good for the universe. 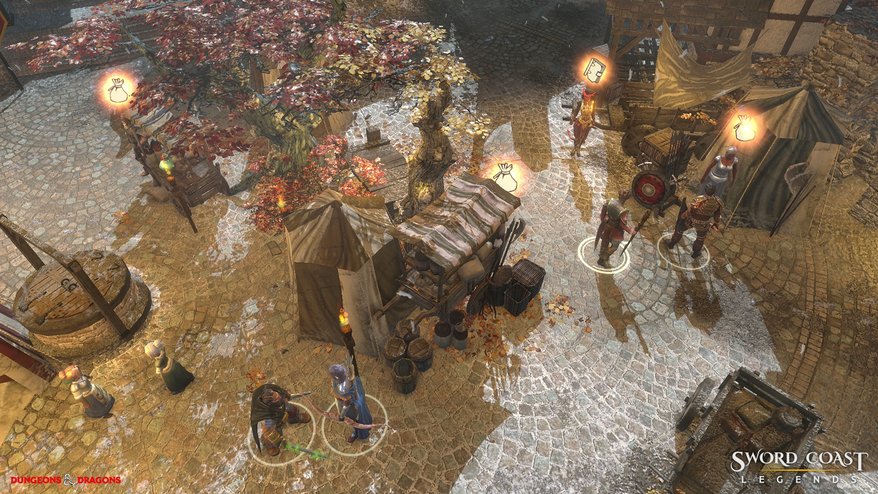 From a technical perspective, the world of the Sword Coast looks and feels like your typical high fantasy fare, and is consistent with the feeling of other D&D universe games like the Baldur’s Gate series. The gameplay itself feels more like a modern action-RPG, with skill trees and cooldowns dominating spell usage instead of gaining feats and having a limited number of uses per day like old-school D&D. Even on mid-range specs the graphics were clean and engaging, with regions ranging from damp caves to moonlit forests, small towns and local caravans. The soundtrack and sound effects also fit the world of the game well; the music is a particular high note, though the constant “On my way!” and other affirmatives that my character belted out every time I chose a new location to move to or target to attack got on my nerves a bit. Still, that annoyance faded into the background when I was playing with friends.

Just like playing real tabletop role-playing games, Sword Coast Legends comes alive based on your party, and I mean that in terms of real, physical people. There’s a full single-player campaign to play through in Sword Coast Legends, and there are plenty of user-created campaign modules to venture through as well, but where this title stands out from other cRPGs is the player-to-player interaction. Voice chat is integrated into the game, though I found that I enjoyed the game most when a friend and I got together and played LAN-style, seeing each other in person even while dealing with virtual worlds. With cooperative play, decisions feel more significant, battle plans involved coordination and strategizing instead of rushing in blind, and the dialog felt more relevant since I knew it would shape the opinions that my friend and I would form about characters in the universe. It added a great element to cooperative gaming that I often feel is missing from video games, and it made me want to schedule weekly time to go through new modules with friends, not unlike real tabletop. Still, Sword Coast Legends doesn’t measure up in every facet to its analog version, and that’s most evident in the Dungeon Master mode. 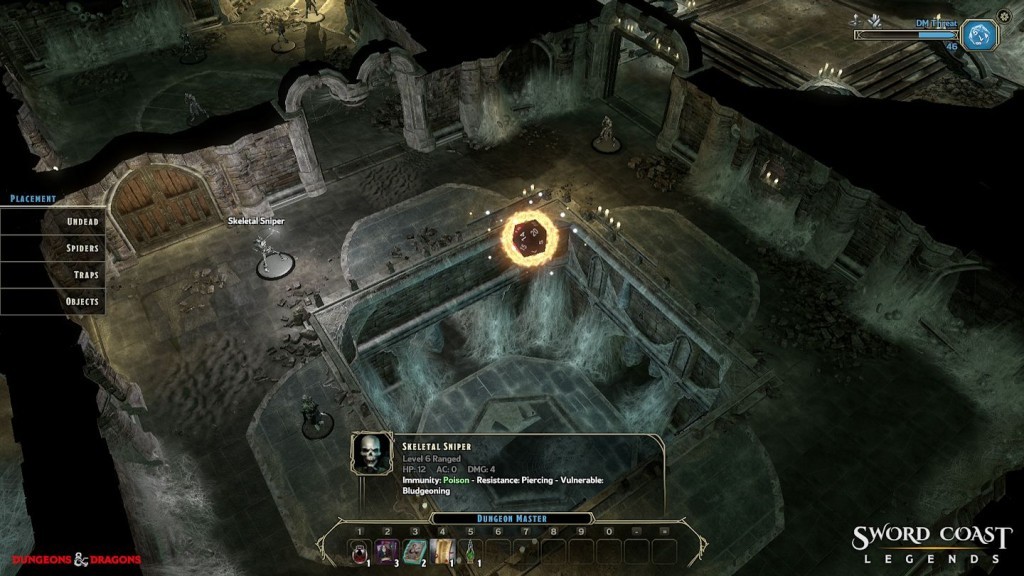 Though the Dungeon Master mode lets you create lengthy campaigns complete with custom quests, party members, NPCs, items, monsters, and more, it still somehow feels restrictive compared to the actual experience. Like any game that can include house rules, playing the physical game trumps the digital one because there are so many more options in gameplay and interaction with other players; the digital nature of the game takes away some of that possibility. But, nature aside, DM Mode omits some functionality the hardcore will likely crave, including true map customization. DMs can choose from a list of variables to edit for their scenes, including multiple pre-configured layouts and creature sets, but if you’re planning on sculpting your own forests and deciding precisely where a house is located in a town, you’ll have to look elsewhere. This likely won’t pose an issue for many players, as the streamlined scene creation definitely speeds up the campaign creation process, but it could be a turn-off to the truly devoted, making it hard to really know who this game will best reach out to.

Sword Coast Legends feels best for a group of friends who are casually into Dungeons and Dragons or newcomers to the franchise, and that creates an inherent problem when it comes to money and time investment. Unlike physical D&D, where one hardcore friend can own all the books and resources and let you utilize them for game or research, each player for Sword Coast Legends has to buy their own copy of the game, raising the cost of entry from free to roughly $40/person. Hardcore players who could evangelize the game will likely find that they prefer the control and face-to-face interaction of physical tabletop, and may prefer titles like Tabletop Simulator or just plain Skype calling when they need a virtual roleplaying fix since they won’t be as pretty, but remove some of the strings attached to digital campaign creation. Individual players may have a tough time finding modules to jump in to with other players as well; though I found open multiplayer games with other people, running through a D&D module can take hours, and doing that with strangers can be pretty intimidating.

All things considered, I really like Sword Coast Legends, and it’s the type of game for me: a casual roleplayer more suited to the world of action-RPGs and generally lacking the time or willingness to commit to a true tabletop roleplaying campaign. That said, the development team has made great strides in addressing community concerns and reaching out to the core group that loves Dungeon and Dragons. In the months since the game’s inital release, Wizards of the Coast and Hasbro have released multiple Community Packs of DLC to provide additional free content along with patches and bug fixes. They’ve added Drow Elves as a playable sub-race, increased available monster abilities, given the characters the ability to respec, and more. They’ve also added to the number of additional interior layouts and provided more specific DM-specific visual effects, and the free Rage of Demons DLC will add content featuring the popular Drow Drizzt Do’Urden, alongside new creatures and a new playable class. Continually increasing the types of content available and listening to the community will make the game more palatable to those with an eye on creating their own stories, though it has yet to be seen whether it’ll win over the hardcore veterans of D&D computer games. I hope it does at some point, though; there are plenty of adventures to be had on the Sword Coast.