A few weeks ago, GotGame was invited to join Creative Assembly and SEGA to take a look at a couple of their titles in development. One of them was their free-to-play multiplayer title, Total War: Arena, which is currently in closed beta. The other title they showed us was Total War: Warhammer, the highly anticipated crossover of the popular point-and-click strategy franchise and the classic tabletop game. Unfortunately, this wasn’t a hands-on preview, but Studio Communications Manager Al Bickham and Campaign Designer James Whitston were happy to show us details on the campaign. 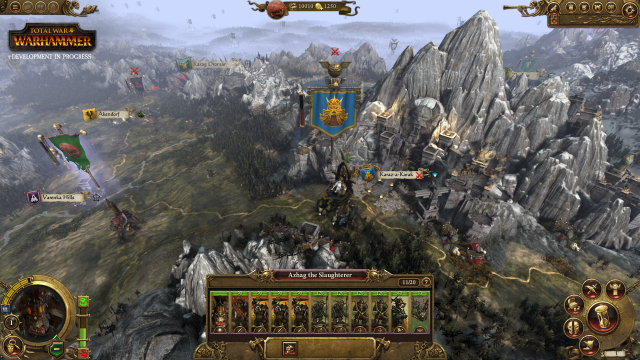 Even though this is a Total War title, it’s really the fantasy realm of Warhammer that takes center stage here, utilizing gameplay elements of the Total War franchise. Fans of the popular tabletop game may recognize landmarks and names pulled straight from the lore, as many of the usual factions are present in the game. Players will find the Empire of Men, the Dwarves, the Vampire Counts, lots of Greenskins (Orcs, Tolls, Goblins, etc.), and more. The Warriors of Chaos will also act as the main antagonist of the game at launch, but will also be playable given the player pre-orders the game.

Al Bickham provided a tour of the overworld map of the game, showing the various lands ruled by different factions, from the mountainous Dwarf territory to the blighted lands of the Vampire Counts. The map was incredibly detailed, showing the various mechanisms of each faction like the mining facilities in the mountains to the architectural structures of the Empire. Glancing over the land brought up comparable imagery to the popular Lord of the Rings franchise, which wouldn’t be the first time as both franchises have been compared over the years, especially after Peter Jackson’s films. The similarities can be even more apparent when watching the epic battles unfold between the factions, though to save time for the preview, the battles were set to automatic mode. 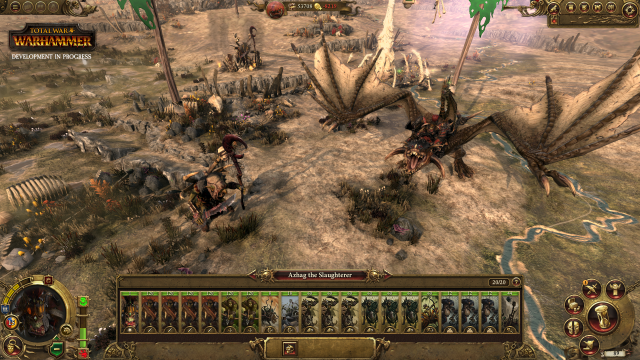 That actually makes for a great feature for players looking to save time, as they can go into a battle for manual control, or they can survey the odds before the battle and put it on autopilot to let the battle unfold using the computer. Players will take control of various lords of each faction, representing each army and progressing their ranks over time. For every victory, players will earn various rewards like battle items that can be equipped and buffs that can provide stat boosts or even bonus experience in future battles. Lords can even take on special quest chains that will allow them to earn special rewards unique to the lord. For example, the Orc Warlord Azhag the Slaughterer could take on a quest that would earn him his wyvern mount Skullmuncha, which would increase his mobility and attack power in future battles.

Lords that lead various armies have a meter that monitors their army’s level of aggression. In the case of the Greenskins, this meter is called “Fightiness”, relating to the aggressive nature of the race. Letting the meter go below a certain threshold by not fighting other armies often will cause animosity among the army, making them fight amongst themselves. On the other hand, if the player manages to get repeated victories, the morale of their army will raise above a high threshold, activating the “Waaagh!” buff, which enables new abilities like recruiting AI controlled armies. It can be assumed that other factions have a similar meter, though catered more towards their unique traits. 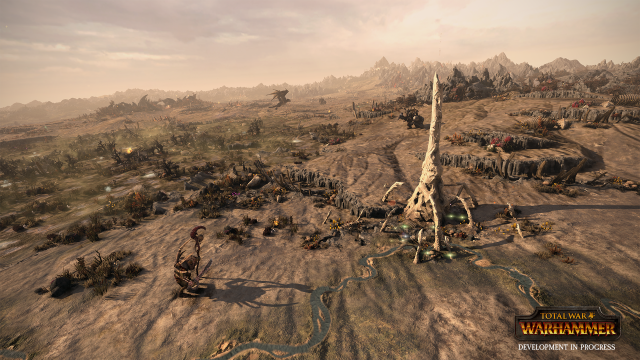 Movement on the map does have guidelines to follow, as each movable unit has certain distances that they can move and various ways to go about each path based on terrain. One example used was when a unit gets caught in-between two other enemy units; if a fight seems too risky, some areas have underground tunnels that armies can travel through to possibly avoid a one-sided fight. There is still a risk here, as those enemy units are also capable of moving through the tunnels, so in the situation that both armies take the tunnels at the same time, a conflict can still take place. Players can also pair up units to provide support, like bringing a shaman into an area to weaken the enemy magic. Players are encouraged to discover new strategies and see what works best for them as they play through the various faction campaigns.

Speaking with James Whitston, he suggested that the game already has expansions in the planning stages, expected to add more factions to play as and in turn, more units. From what was shown, it’s easy to see how fans of both series can enjoy this title, providing hours upon hours of strategic gameplay, even with automatic battles. It’s great to see the amount of detail that Creative Assembly carefully placed into the game as well, utilizing the lore of the Warhammer franchise and crafting a fantastic vision. Total War: Warhammer is expected to release on April 28th, 2016, and will be available for PC, Mac, and Linux. For more updates on the title as they happen, stay tuned to GotGame.com.