Nearly three months after releasing the Incinerate ‘N Detonate content pack, Tripwire Interactive is ready to release their next content pack for Killing Floor 2. With this update brings a new perk, the Gunslinger, as well as a new set of weapons, two new maps, bug fixes, and a new character. However, perhaps the biggest part of the update would be the return of the original boss from the first Killing Floor, the Patriarch. With a minigun for an arm, a computer-controlled rocket launcher, cloaking technology and a powerful melee attack, the Patriarch is sure to offer up a challenge for fans of the game. 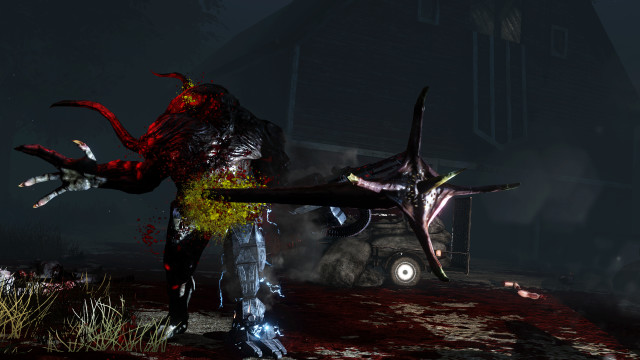 At the end of a survival round, the game will randomly pick either the previous boss Dr. Hanz Volter, or bring in the Patriarch. The Patriarch is a much different beast, relying on cloaking technology and spraying bullets from a distance, but don’t let him get too close, or he’ll grab you with his tentacle claw that launches from his chest. He can move surprisingly quickly despite his massive size, and he’ll definitely try to sneak up on the player while cloaked. His rocket launcher can either shoot rockets directly towards the player, or he’ll use his wrist-mounted computer to summon a volley of rockets that lob in a wide area of effect. He makes for a very different boss than the grenade launching Volter, and seems to lack a “rage” mode as well. He’s actually pretty comparable to some notable Resident Evil villains, like a crossover between both Nemesis and William Birkin.

With the new Gunslinger perk, dual-wielding pistols is now available in the game, offering quick and stylish shooting. With this perk comes stat boosts like less recoil, faster movement speed, increased bullet resistance, and better weapon handling. The class is a lot of fun and offers another unique experience in the game, and even wields some powerful pistols like the Desert Eagle and Bone Collector magnum. The nail bomb is also a new explosive that can be pretty effective against swarms of enemies, getting a pretty big damage radius. The melee weapon is the new bowie knife, which can work fairly well if the player wants to conserve ammo and take out enemies with a bit more risk. The Remington 1858 is a great starting weapon for the perk, dual-wielding right from the start, able to upgrade up to the M1911, the Desert Eagle, or the Bone Collector, all capable of being dual-wielded. It can be expensive to buy two pistols at once, so the game offers to buy one at a time from trade pods, making it a bit more manageable. 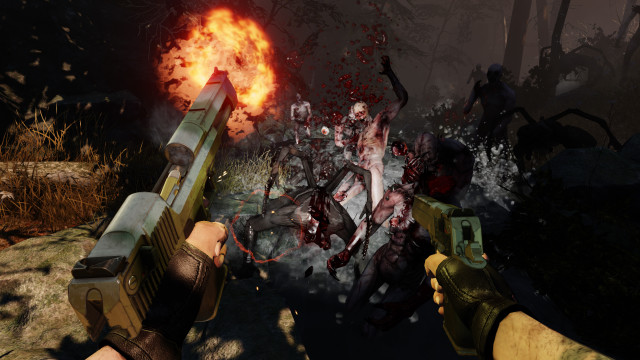 The new Black Forest map is a pretty large environment, blending both natural elements as well as a man-made element with a dilapidated bar and a crashed Horzine Zed-transport (housing contained Zeds that seem very angry). Given the lush forest atmosphere and plenty of trees, it can be fairly easy to get lost in this map, making landmark recognition almost vital to getting around, though even that proves to be rather difficult. Zeds can attack from all sorts of directions, so it’s best to keep moving to clearings to manage the surrounding area better. There is a nice river that works well for this as well as a bridge that has a broken train track on it. This map also houses ten glowing collectibles all over, all pink in color and most of them fairly easy to destroy without wasting precious ammo. One of them seems to be a bit more difficult to get to, being in a small container on the Zed-transport.

The Farmhouse map was a personal favorite, perhaps because the area was a bit easier to manage. With a large mansion-like house and a barn, this map is surrounded by a fence that Zeds can climb over to enter the field. With only two large buildings and some vehicles and hay bales, this map is fairly easy to get around, but it does have some nice close quarters areas in the farmhouse, given many rooms to wander around and even a basement, giving a sense of vertical movement with up to three floors to move around. When inside the farmhouse, Zeds can climb through the vents, though when outside, they’ll jump from the roof or second floor to chase their targets. The smaller rooms can also make for a nice detour when trying to escape a boss as well. The collectible on the map is a total of ten ventriloquist dummies, much like the ones that would be seen in various horror films. These dummies can be found in various hiding spots like the back seats of cars or the rafters of the barn. These were actually really fun to find, and made for a much better collectible than previous maps. 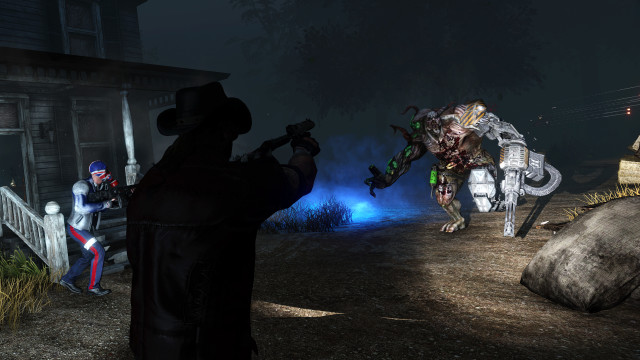 With this update comes 74 new achievements as well, and through this preview, some were earned, though since the update has yet to be released, the exact requirements for those achievements have yet to be revealed. The new character, Oisten Jagerhorn, was pretty fun to play as, being a Swedish biker that plays in a Metallica cover band, “Metalbika”. He considers himself a modern day Viking and he makes some pretty funny comments throughout the matches, a personal favorite being the description of the Siren’s scream as sounding like the band Pantera. It’s this sort of humor that makes Oisten a welcome addition to the roster, and he even makes for a good Gunslinger.

The update also adds the Zed-conomy and Trading Floor store, the new and controversial microtransaction system that will be added to the game. Most of the content purchased in the store is user generated, those users getting a portion of the profits. The items purchased are meant to be purely cosmetic, though there have been hints that this may be a place to purchase all new weapons too, though how this strategy will work out for Tripwire is yet to be seen. This pack also allows for Steam mod and map workshop support for the more creative types in the community, allowing for some awesome custom maps. This free update will hit the game soon, but it’s clear that it packs quite a lot of content with it, hopefully sparking new life into the community.