With Albion Online’s Closed Beta in progress, Sandbox Studios has decided to share some information about the Zone and Flagging systems within the game, which are two core structures that are set to keep player-versus-player fun and challenging for all participants.

As with most MMOs, Albion Online provides players with specific zones for PvE (Green Zone) and PvP (Red Zone) activities. The Green Zone is set up to effectively protect beginners while giving non-PvP players the opportunity to wander around the world without having to worry about being killed by other players. 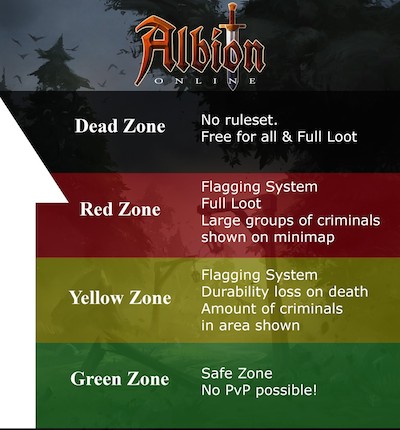 This Zone system works in conjunction with the Flagging system, which requires players to “flag” themselves as hostile before they can attack other players. While flagging yourself, you will be immobile for a minute, and this system, the developers believe, helps discourage ganking, as well as make it easier for players to decide where to go, as each area will display the number of hostile players.

Those who don’t want to dive right into the Red Zones can venture into the Yellow Zone, which also allows PvP. The big difference between Yellow and Red is the fact that in the latter, you risk losing all of your hard-won gear. In the former, however, you will only lose a significant amount of durability if you are defeated.

Finally, there’s the Death Zones, which are the worst zones for anybody looking to avoid PvP interactions. In these zones, there are both a full-loot system and the flagging system has been removed, meaning anybody can kill you at any time.

For more information, you can check out the official developer post.