Lightwood Games (Word Search by POWGI) is at it again with a new eShop game, Word Party. This new title has a heavy focus on multiplayer and now has a much larger variety of games to play as opposed to “Word Search”. With 28 different word-based minigames, Word Party takes more of a WarioWare approach to things, giving a strict timer to every game that sticks to 30 seconds or less. Players are able to play these games by themselves, but the game heavily encourages multiplayer, as that is how half of the games are unlocked.

With up to five player support, Word Party can be played in one of two ways. Like Brain Age: Train Your Brain in Minutes a Day on the original DS, an individual can go solo and use the various minigames to improve their mind, challenging themselves to improve. The other way, as mentioned, is to bring friends together, preferably the ones that enjoy games of the intellectual variety, and challenge each other to a literary competition. 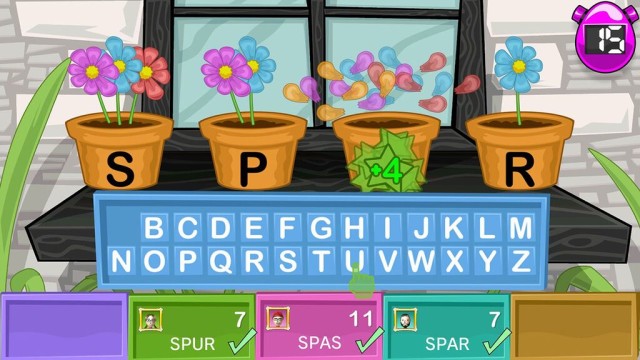 The multiplayer aspect may be the main focus, but there are a few issues that come up with it. Given five players, one person will have the Wii U Gamepad, and the other four would use Wii Remotes. Most of the games give all the players access to the same exact screen, so it is very easy to screen-look and copy other players. There are obvious exclusions like in the games “Spelling Bee” or “Word Search”, each word found can only be claimed by one person. An example of a game where this becomes a problem would be a game like “Crossovers”, where each player has to select the right letter to complete two words in six different crossword puzzles. If one player picks the right letter, it gets marked and everyone (even the Gamepad user) has access to that information. Given most of the games give players limited time, it isn’t something that will always come up, but it is a pretty noticeable issue.

Some of the games are actually rather creative, utilizing fun themes and posing a real challenge. The game “Space Blaster” takes a Space Invaders look to play a game where players have to shoot letters to create a “space”, making it so the words in the formation can tell a story. Given roughly thirty seconds, it’s rather challenging for a person to do this solo, but by working with multiple people, this task can be done rather quickly. “Go Fish” has fish swimming across the screen with the beginning of words on their sides, and players have to select ones to complete the words with the letters “SH”, so a fish with “CLA” would work, but one with “BLE” would not. Overall, the game selection is rather diverse and everything feels fairly fresh. 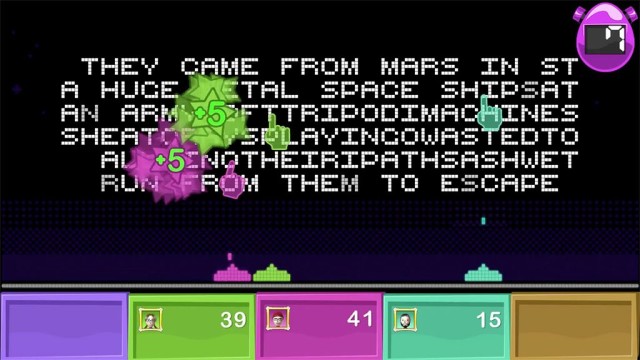 Considering the large variety of games, when playing multiplayer, the game automatically selects seven of them at random for the players. It would have been nice to have an option to choose the game in multiplayer, as the single-player option gives the player the choice of game to pick. Another option that would have been nice to have would be a way to change the timer, as 30 seconds is good for a challenge, but it makes many of the games rather short, only certain games that have six or so rounds lasting longer. Also, going back to how someone could play this like the Brain Age series, it would be nice to have a sort of leaderboard to have a reference of the best score, or even a ranking system to give a player a sense of how their mind ranks up. Beating a minigame saves absolutely no information, and gives the player no way to see how well they did in the game.

One thing that was interesting of note was the fact that some of the spelling games tend to give points based on the length of a word that can be spelled, given the letters. . (Author’s Note: It has come to my attention that “easies” is a word, albeit an uncommon one. The issue had no effect on the final score of this title so it will remain unchanged).  It does penalize players for the situations that there is an incomplete or nonexistent word, but there was just one case where it felt a bit unusual. It is also worth mentioning that all selections made are final in a game, so if the player makes a mistake, there is no going back. Pick a wrong letter or make a selection on accident, the game does not offer a way to deselect or change selections. 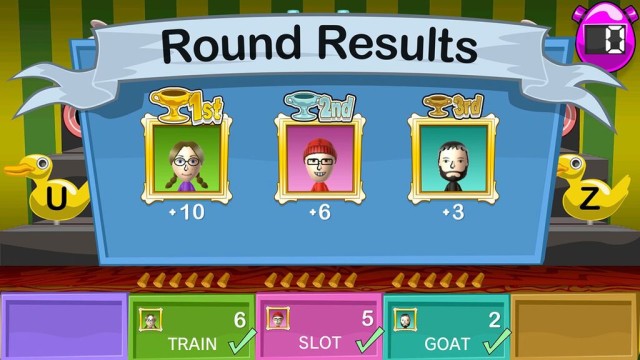 Getting to the presentation of the game, it’s rather simplistic with 2D visuals, most games having a cartoon-like look to them. It is nice to see a game like this have Mii support, as players can pick their Mii to bring into the game and represent them as their avatar. Each of the 28 minigames offers a different song, so there is at least variety in the music, though the repetitive drum beat on the minigame select screen could use some changes. Overall, Word Party, regardless of some interface flaws, is still a fun and engaging multiplayer experience, and it can even show someone areas where they need to improve their language skills. It isn’t a game for everyone, but for those that enjoy games like Boggle, Scrabble, or other word-based games, they’ll be in for a treat.