Artifice Studio has unleashed a new real-time strategy game known as Conflicks: Revolutionary Space Battles. How well will the game live up to its name?

Conflicks takes place in an alternate dimension. In this dimension, Da Vinci was creating art one day and made an amazing discover that accelerated humanity’s progression a great deal. This amazing discover was found in the humble yolk of a chicken egg. It turns out that this yolk contains something special known as metamatter, which can be utilized to increase intellectual power and has the ability to cross both time and space.

Thanks to this amazing discovery, the number of hens and eggs produced on Earth increases many times over, eventually leading to Earth running completely out of room. Thus, in the 18th century, humanity ventures into the stars and four powerful empires emerge to control both planets and metamatter. 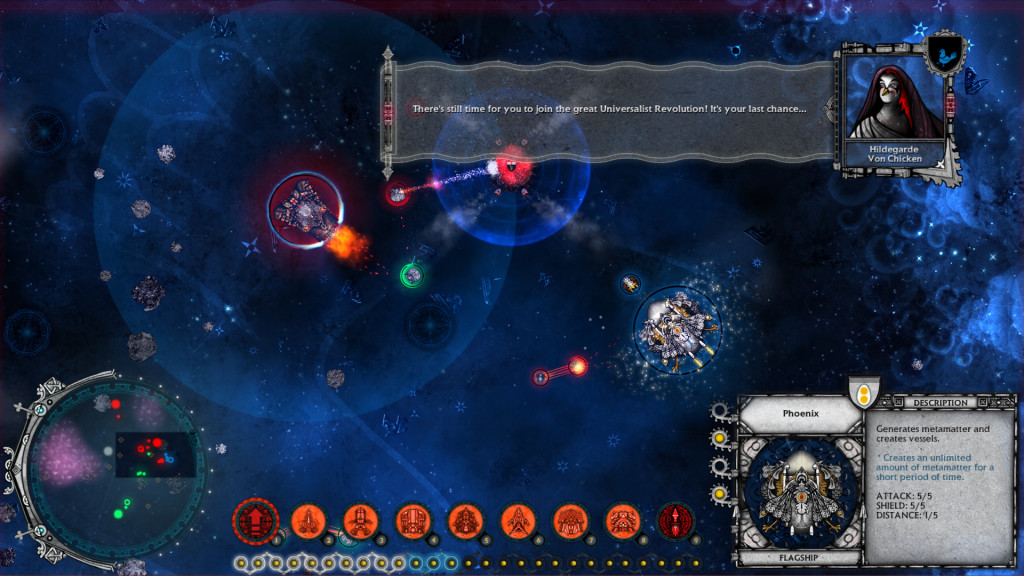 There are several different characters in the game, with each of their stories being told by Olympia to the Chk’Rathii leader. The Chk’Rathii are chickens that had too much metamatter pumped into them, and, as a result, grew to the size of humans and gained intelligence. They are at war with the empires that rule space, which happen to be modelled on European and Middle Eastern cultures, and are attempting to bring the planets under a new Galactic Republic in which humans and Chk’Rathii can live together in peace.

Each of the main humans that join the Chk’Rathii have different reasons, which you will see prior to the alliance. Every story does a good job at fleshing out the universe presented in Conflicks, and the characters take inspiration from historical monarchs and fictional heroes of the era the game is set in.

The actual gameplay in Conflicks is clued in by the name. You will move your ship by clicking and holding the mouse button, then releasing to flick it in a direction you choose, with the longer you pull back the mouse and the type of ship limiting how far it will travel. This sounds like it can get boring quickly just reading it, however there are several other elements that help keep it from feeling like a drag. 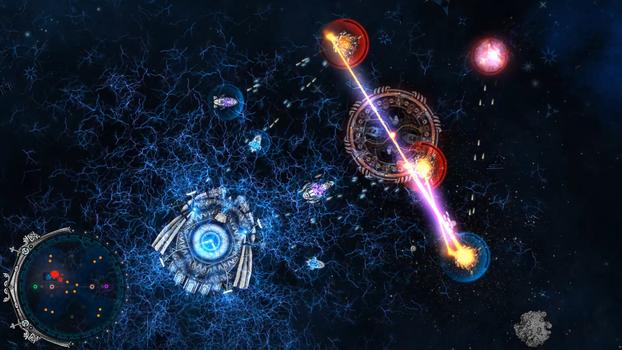 Your ships, for instance, require you to harvest and utilize metamatter from planets. Your main flagship will be able to create other ships with this resource, and, in order to get enough to create the larger ships, such as the Destroyers and Battleships, you will need to create a Henship, then flick it towards a planet so that it can begin harvesting.

In addition, you will need to plan your routes and strategies well in many cases. If you just go in flicking every direction you wish, you run the very real risk of losing your ship to the gravitational pull of a planet or black hole, which can put you at a serious disadvantage in battle.

To make the biggest impact on your foe, however, you will need to create a fleet. This is done by creating a Frigate, which has the unique ability to chain a number of ships together, allowing them to all be moved at once. As a result, the slower ships will be able to move much farther than they could solo, although it does have the cost of being unable to utilize the individual abilities of each of the ships. 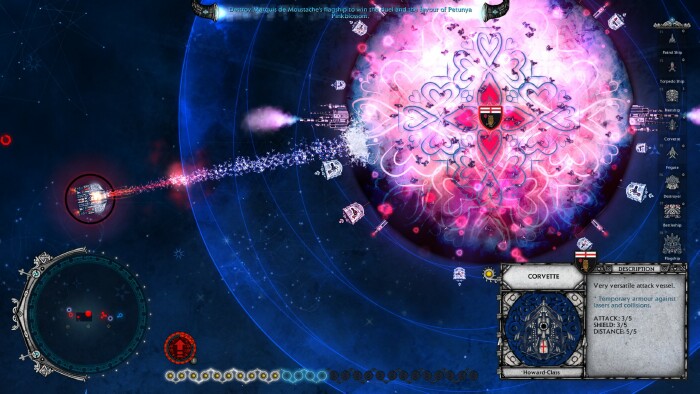 Once you arrive where you wish, you will be able to unchain the ships from the fleet, if you so desire. Depending on the mission, however, you’ll need to plan quickly, as some have time limits for you to achieve victory.

Those interested in going up against other players will be pleased to note that it does have a competitive multiplayer mode as well. This mode allows up to four opponents face off against one another as they attempt to gain 1000 Victory Points, which are achieved by capturing planets, destroying enemy ships, and even destroying flagships, which nets you a large amount of points.

Unfortunately I was unable to play against random people online as the lobby tended to be deserted when I tried. I did have some friends that joined me, however, and we had quite a bit of fun. This multiplayer mode may very well be exactly what RTS players are looking for in terms of a quick fix.

Overall, Conflicks is an entertaining RTS, with only a few issues. The main issue that comes to mind is the AI itself on some missions. For example, on a few occasions I created a blockade outside of range from my enemy Flagship’s weapons, but close enough so I could fire upon it myself. The AI decided to send fleets at my well defended Flagship, thus allowing me to take out its Flagship without much trouble at all and win the mission quite quickly. 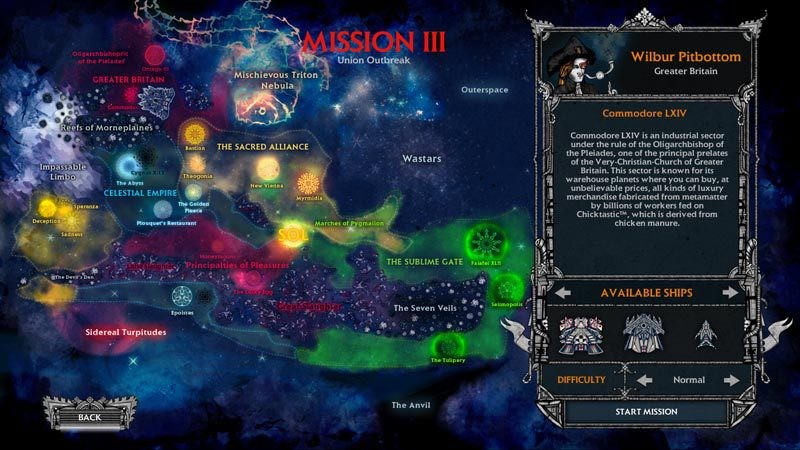 Luckily this does not appear to be an issue that is regular, and the depth of ships allows plenty of experimenting tactics-wise. With a pleasing art style and well-composed music, I hope more gamers pick up Conflicks to help popularize the multiplayer mode.