The Nintendo 3DS is certainly no stranger to JRPG titles, especially those of the “monster-catching” variety, most notably the Pokemon series. For the past couple of years now, Japan has had a new contender on the scene, Level-5’s Yo-kai Watch, and now that franchise has finally hit American shores. The game has been often compared to Pokemon, but it also shares similarities with not only the Dragon Quest series, but the Mega Man: Battle Network games for the GameBoy Advance as well. Despite the similarities, Yo-kai Watch manages to stand out on its own. Yōkai, a more accurate spelling, is a Japanese term used to describe ghosts and other supernatural beings, so the “monsters” in question in this game are basically ghosts (named after puns in most cases).

Players will start out as a young boy or girl (whose name can be chosen by the player), quickly tasked with trying to catch bugs for a collection to show to the local neighborhood kids. Things suddenly take a turn into the supernatural as an old capsule machine unleashes Whisper, a “butler” like Yo-kai that follows the player everywhere they go. Think Navi from The Legend of Zelda: Ocarina of Time, but with a little less hand-holding. Within moments, Whisper takes you into the world of discovering Yo-kai, giving the player a special watch that allows one to see Yo-kai. 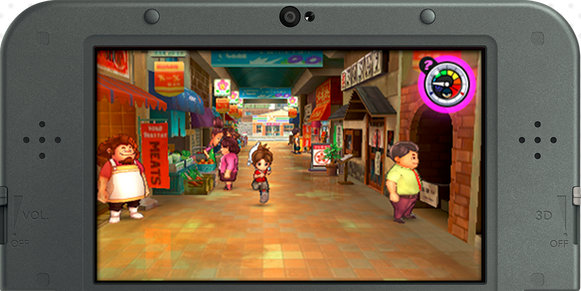 Unlike Pokemon, there are no random battles in Yo-kai Watch, as most Yo-kai will be found in hidden places like underneath cars, up trees, in trash cans, etc. Using a Yo-kai radar, it makes it easy to know when a Yo-kai is close by. These Yo-kai have to be targeted with the lens on the watch, using the touch screen or circle pad to keep the lens on them until the energy meter fills up, allowing for the battle to start. There are certain areas where Yo-kai wander freely, as these are more aggressive creatures and they will willingly go after the player to start a battle. Yo-kai will grow stronger with experience and even evolve by leveling up, though some need to evolve by fusing together two Yo-kai, or even fusing a Yo-kai with a special item.

Battles play out with up to three enemies, and up to six Yo-kai in your possession (three out at a time). Players will select medals of their Yo-kai to equip their team, and they are encouraged to position their medals strategically, as the touch screen allows for the team to be rotated clockwise or counterclockwise. Certain benefits can be gained when Yo-kai are adjacent to each other, but there are more reasons to have the rotation mechanic as well. Unlike most JRPGs, there is no “command” option, as Yo-kai will fight on their own. The only attacks the player can initiate themselves is the “Soultimate” attack, a special attack that each Yo-kai will have that is unique to them. Soultimate attacks require a full “soul meter”, and then will be activated by a mini-game where the player has to either use  the stylus to spin a wheel, tap bubbles, or trace designs over the Yo-kai. It feels a bit gimmicky, but after the Yo-kai on the team grow stronger, it becomes used a lot less for standard battles and becomes more of a strategic move for boss battles. 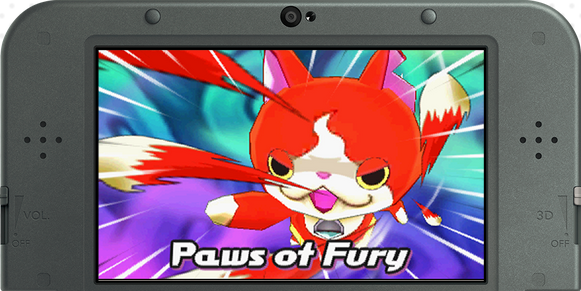 One thing that may make fans of this genre re-think this title is the way to obtain a Yo-kai in battle. Unlike Pokemon, there is no “Yo-kai-ball” to throw out to attempt a capture. In this game, the player has to befriend the Yo-kai by making them like them IN the battle. This will typically involve feeding them their favorite type of food, though unfortunately, there doesn’t seem to be any source of information in the game that will tell the player what a Yo-kai actually likes to eat. This means that often times, a player will have to throw out random pieces of food to try and figure out what a Yo-kai likes, though since Yo-kai attack on their own, this usually means that the player will only have the chance to throw out one piece of food before the Yo-kai are defeated. Even if the player figures out the favorite food of a Yo-kai and gives them a high quality piece to make them like them a lot, it does not guarantee that the Yo-kai will befriend the player at the end of the battle. This basically means that a standard player will probably finish the game with only a fraction of the Yo-kai in the game befriended, and unfortunately, many of them will be acquired through the story rather than through battle. It is also worth mentioning that boss Yo-kai cannot be obtained in the game.

Despite the befriending system, the game is pumped full of charm, and though the humor is targeted towards a younger audience, the title can still be enjoyed by older fans. The art style and visuals of the game are actually very well done, delivering a consistent look and feel of color, and the the world feels alive with all the various people and Yo-kai populating each area. Level-5 has done a fantastic job with the presentation in the game, as the little details shine through, like how the player’s character will remove their shoes upon entering any home, or how the game tries to scold the player when they use a cross-walk without pressing the cross-walk signal button. Even the various anime-style cutscenes and comic strips hidden throughout are very charming and deliver a unique experience. 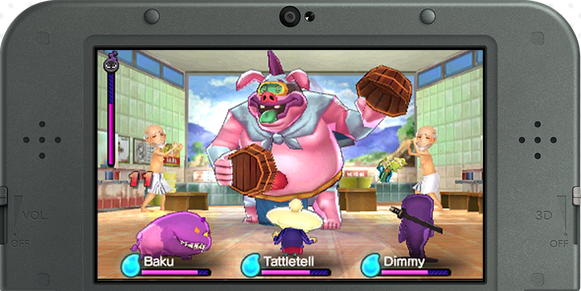 The music in the game is fun and usually uplifting, though sometimes it gives off a sense of mystery, which works well for a colorful game about catching ghosts. Many of the cutscenes in the game have voice acting and each Yo-kai will briefly say their name when they are befriended. Finally, there is the very easy to navigate menus and maps, giving a clear and easy representation for the inner workings of the game. It is useful to have a map on the touch screen, though it would’ve been helpful to use the map to determine locations, as characters will often direct you to places, and sometimes it’s very difficult to know exactly where that place is since many buildings aren’t labeled.

During certain points of the game, the game will activate a sequence known as “Terror Time”. During Terror Time, a large Yo-kai will enter the area, turning the world black and white, removing people from it, and closing off all exits except for one. During this sequence, there will be treasure chest all over the map for the player to collect, though as time goes by, more smaller Yo-kai will populate the map, acting as lookouts for the large one. Getting caught by these Yo-kai will make the large one aware of your location, as it will speedily take chase. Given the fact that the player has a stamina meter for running, and blocked access to a bike (which they obtain about halfway into the game), it is very difficult to outrun them. If the player was gathering treasure and manages to get caught by the Yo-kai, they can expect a brutal battle where they will likely watch their poor team get destroyed, making it so that all the picked up treasure will be dropped if the player shall (and most likely will) lose the battle. 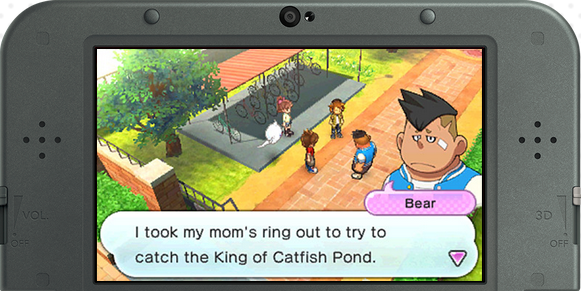 Unfortunately for the review, the Streetpass and multiplayer features were unable to be tested, though the game essentially offers a Yo-kai hotel where wandering Yo-kai from other players will take residence, either giving an item, or challenging the player to a battle. Multiplayer is essentially a six-on-six battle through local play only. Despite the local features, there are online features as well, as rewards can be delivered via wi-fi, and there are events where “criminal” yo-kai will wander the town of Springdale for about a week. Catching them three times will reveal a letter in a password, and it is up to the player to work with other people to obtain the other letters of the password, allowing access to more rewards. It’s a fun little feature, though so far, it doesn’t seem like the benefits are worth the trouble.

One last little feature is the Yo-kai Cam, using the 3DS camera to take a picture of a persons face. Upon taking the picture, the game will randomly assign a Yo-kai next to the face to tell a “fortune”, and through repeated use, rewards can be picked up in the game. There are even little challenges, like managing to generate a picture of a bug Yo-kai. Since it is random, it’s very odd that the game assigns missions, but it is a fun little distraction. Yo-Kai Watch may not be perfect, but through a strong presentation and a unique battle system, it easily makes for a family friendly purchase this holiday season.