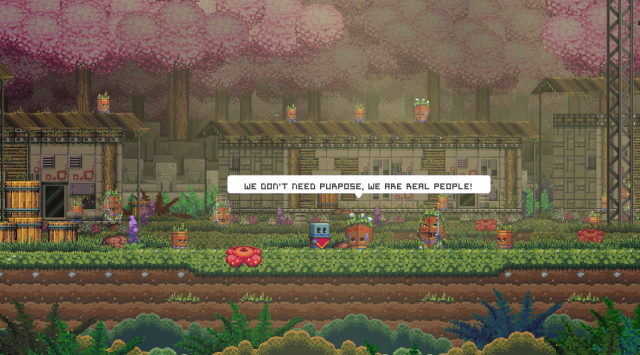 Earlier this year, Rising Star Games invited GotGame to preview many of their upcoming games. Of those games was Delve Interactive’s Poncho, a post-apocalyptic game where players take the role of a robotic boy that wears a red poncho. It was very much a work in progress at the time, and as of this writing, there have already been two updates for the game post-launch. Most of it was to address fan feedback, but after playing the game start to finish, one could see room for a bit more improvement.

Poncho is a platformer that focuses on the ability to shift planes, typically only going between three planes, but further on, there will be special paths that allow a second set of planes to travel through. Each area is made up of several sections that can be full of platforming challenges, most notably the moving blocks that will shift planes as well. Not only are there blocks that shift on their own, but there are blocks that shift based on when the player shifts. These blocks weren’t explained very well and even though one could figure them out through common sense, it would have been nice to have some sort of indicator. 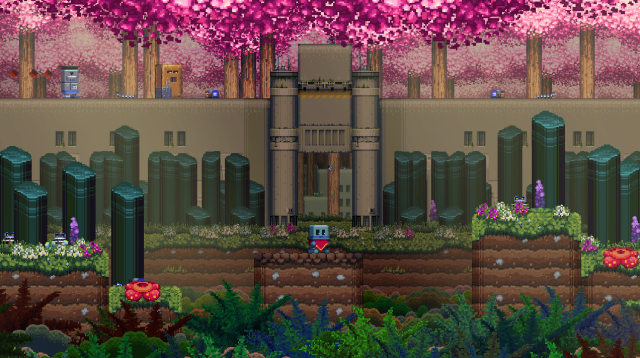 Each area is cylindrical, so if the player goes far enough to the right, they’ll eventually reach a point where they loop around the area from the left. Each area will have a goal point to reach to complete it and move on to the next area, and as players progress, they pick up a couple abilities as well. One of which is the “Smash” ability, which allows Poncho to do a ground pound, mostly used to uncover hidden red gems. Speaking of the gems, each area has these red gems all throughout, and players will use them to buy keys from the merchant. These keys will be used for gates that will either prevent progress, or open up short cuts, and if the player doesn’t have enough keys, the red gems are vital. Some keys can be found throughout the levels, and some can even be earned as Poncho later gains the ability to fix broken robots, which fixing a certain amount will earn him a key.

Despite the retro style, the game still needs quite a bit of optimization. It is not a very graphics intensive look, but the many layers, randomly generated characters, and visual effects seem to cause some performance issues. Running the game on a gaming PC, there was slowdown in areas where environmental effects took place, like flowers spitting out pollen, or light shining over cherry blossoms. Given only a high or low setting, there could have been a few more options to make the game run better, but it still comes down to better optimization. Given that the game was worked on by about five people, it’s understandable, but it is hopeful that these issues get addressed somewhere down the line. 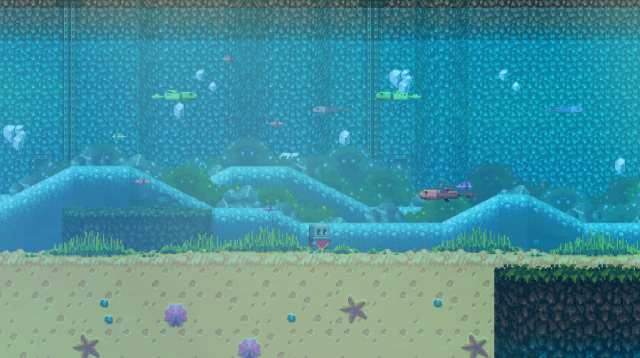 Aside from the slowdown, the game does have some other issues. Falling into pits can cause Poncho to restart from the last safe platform he was standing on, but sometimes he respawns above the pit, on top of temporary platforms, or even sometimes IN a platform, meaning the respawn system could use some work. Another issue is with one area that involves water. Props to the developers to try and add variety to the physics, but the “hold this button to adjust view” thing wasn’t really doing it, and it felt like it may have been better to remove the water entirely. Perhaps the biggest issue with the game, one that the developers have already been informed about, is the shifting platforms. Given that the game has no actual enemies, the shifting platforms easily substitute for that role, as they are incredibly frustrating and require not only a lot of patience, but quite a bit of luck. There would be points where I would scale up a platforming segment built of shifting platforms, and one wrong plane shift and all of a sudden, Poncho falls all the way back to the bottom, having to start over again. This game makes the infamous disappearing block platforming segments in Mega Man look like child’s play, and cause more frustration than fun.

Even though Poncho has it’s flaws, it does have a couple good things going for it. The chiptune soundtrack by Jack Odell stands out and creates a great mood for the many areas of the game, including a fun little hidden song with chiptune lyrics. It was really quite moving, and it only helped to highlight the other great thing about the game, and that was the emotional, yet subtle story. Tasked with saving humanity by finding his creator, Poncho sets out to the Red Tower, the place his “father” tells him to go to. Meeting many interesting robots along the way, the story doesn’t really have many moments, but the final scene is truly touching and can easily tug at the heart strings. Even though the game is roughly two to three hours long, the ending does pack a powerful punch full of emotion, and even gives the player one very difficult decision. 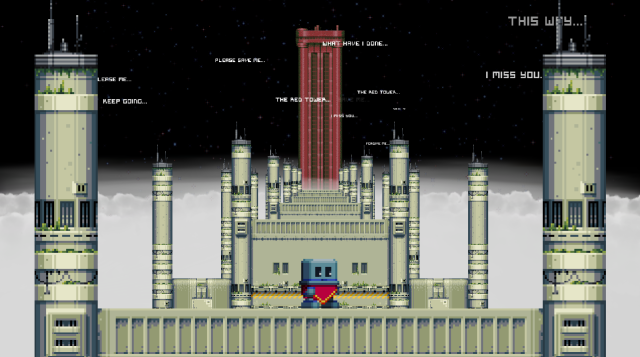 Poncho isn’t a perfect game by any means, but it’s clear that Delve Interactive is dedicated to updating the game until it runs the way they feel it should. Despite the bugs and frustrating platforming, it is a game worth playing for the soundtrack and ending alone. Given some extra time, hopefully the game shines bright, because one can definitely see it being a cult classic. The game certainly has style going for it and it has a great bit of charm too, and again, it’s rather impressive for a game developed by a handful of people.