Continuing off of the preview from the other day, XSEED Games offered six games for their Fall preview. This time we cover Return to PopoloCrois: A Story of Seasons Fairytale for the Nintendo 3DS, The Legend of Heroes: Trails of Cold Steel for PS3 and PSVita, and Earth Defense Force 2: Invaders From Planet Space for the PSVita.

Return to PopoloCrois: A Story of Seasons Fairytale 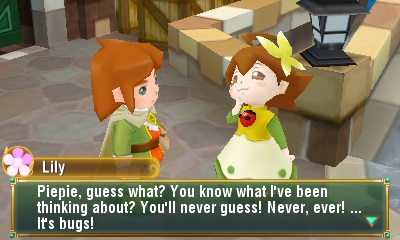 The Nintendo 3DS certainly isn’t a slouch when it comes to the JRPG scene. There are several high quality titles in the genre releasing almost monthly, many of which utilizing different art styles, gameplay mechanics, or even crossovers. XSEED is doing the latter, utilizing their Story of Seasons franchise (formerly Harvest Moon), as well as a classic manga and anime series PopoloCrois. The game maintains the farming simulation mechanic that fans of the Harvest Moon series would be familiar with, but focuses mostly on the JRPG aspect. Considering this is the sixth game using the PopoloCrois franchise, only one being released in the US, they already had an established gameplay style to use as a foundation.

Like typical JRPGs, there are combat scenarios with random battles, which the encounter rate can be adjusted with a slider to make the rate as low as 25%. When in these combat scenarios, players will have their party of characters enter a turn-based battle where party members can be moved along a grid, allowing them to attack adjacent enemies. Enemies will typically do similar patterns, moving along the grid and attacking whatever target they see fit. Outside of combat, players will travel across overworld maps and through towns, and even have the option to fast travel using the touch screen. 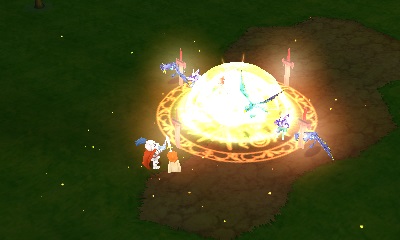 The gameplay may be one thing, but the real charm of this title comes from the story and it’s endearing characters, practically all from the PopoloCrois series. Playing as Pietro, the young prince of the kingdom of PopoloCrois, we find out that during his 13th birthday, a woman by the name of Marmela reveals a new crisis for the people. A dark energy is affecting the crops of her land, known as Galariland, and the king of PopoloCrois realizes this same phenomenon is affecting them as well. Sending Pietro with Marmela to find out how to avert the situation, Pietro is soon stuck in Galariland where his title of prince means practically nothing to the people he meets.

With nothing but an abandoned farmhouse and a plot of land, he works to remove the darkness and hopefully resurrect the Goddess Galariel. In doing so, he hopes to also find his way back home to his kingdom. The farming is essentially worked into the plot, but still remains almost completely optional, so players could just enjoy the 25 hour story without the need to do any farming. All the main characters typically have fully voiced dialogue, and the visual style has a really charming look to it, almost reminiscent of a classic Tatsunoko anime like Yatterman, only with “chibi” proportioned characters. 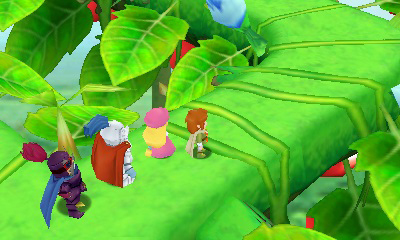 Playing through a bit of the game, it was easy to fall in love with some of the wonderful characters of the PopoloCrois series, including the great GamiGami, a man who wishes to be villainous but is far too nice. He added quite a bit of comic relief and even a few pop culture references, which surprisingly worked well despite the more medieval fantasy setting. JRPG fans can look forward to this title hitting the 3DS soon, as it is expected to release early next year.

The Legend of Heroes: Trails of Cold Steel 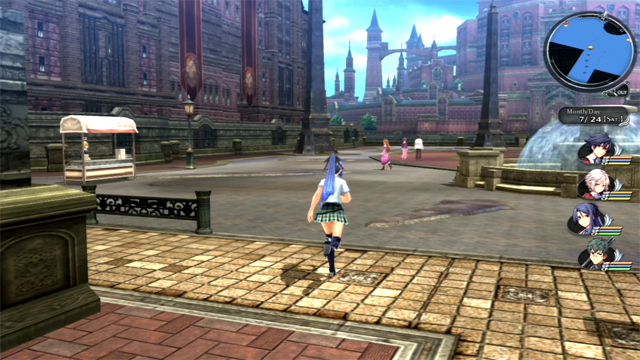 Nihon Falcom brings a new entry in their Legend of Heroes franchise, releasing on both the PlayStation 3 and PlayStation Vita as it delivers a deep JRPG experience to fans nationwide. Taking place on the same continent as The Legend of Heroes: Trails in the Sky, Trails of Cold Steel explores a deeper look into the politics of the Erebonian nation. Delving into the lore of this franchise, fans of the series can expect new story elements, while newcomers can expect to be engaged in a deep narrative.

The story focuses on Rean Schwarzer, a 17 year-old student at the Thors Military Academy that quickly realizes that his red uniform is different than the ones worn by his fellow classmates. He has been handpicked to be placed into Class VII, a special class where a student’s skill means more than their rank. As players take on school life, they will get to know their fellow students and grow a bond that will benefit them throughout the game. 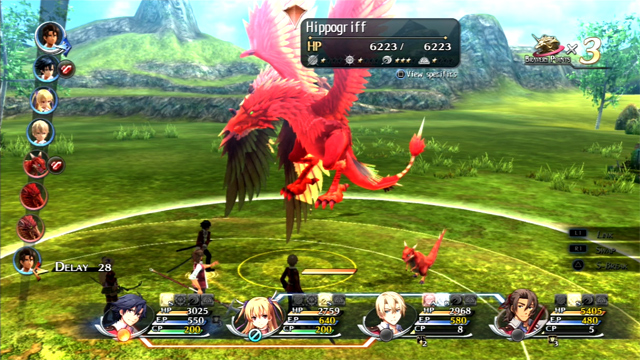 Similar to Return to PopoloCrois: A Story of Seasons, the game has a turn-based combat, which is less strategic but still involves placement on the field. As with developing the bond outside of battle, players can use battles to develop bonds with various characters during battle, making it so those characters can assist with attacks, defense, or even support type abilities. In the event of an assist, the player will have to react to a quick-time event where they have to push a button for either an “assist” move or a “rush” move, the rush move seeming to be a powerful finishing attack. Aside from that, each character can attack like normal, as well as have access to more powerful special skills. Against normal enemies, the regular attacks tend to be just fine, but against more powerful enemies, it becomes a real requirement to use the more powerful skills.

Fans of the series may remember the “Orbment” system, which now utilizes the new “ARCUS” system, allowing for a more streamlined approach to customizing abilities and growth for characters in the party. It works very similarly to the Materia system from Final Fantasy VII, with various orbs of different attributes that can be applied to the characters, and there are tons of them to utilize. During the demo, the main mission was to round up sheep that escaped a settlement. This allowed for lots of traveling across the overworld map, luckily on horseback, which helped speed things along. Unlike chocobos, riding a horse does not protect the player from enemy encounters, but much like the Tales series, enemies are easily avoided as they can be seen on the map rather than encountered randomly. 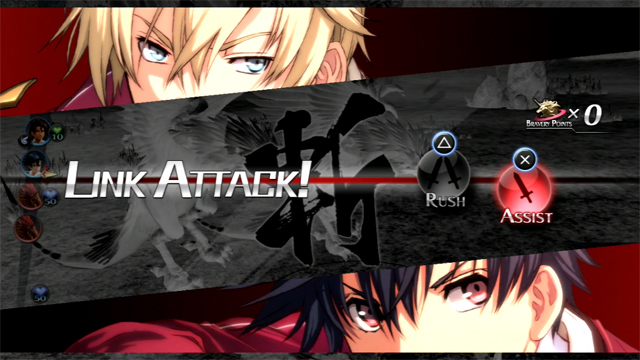 Staff on hand assured that there were hours of gameplay to uncover, and even more for people that wish to complete the game 100%. For people that are into deep roleplaying games with a colorful atmosphere and tons of options, The Legend of Heroes: Trails of Cold Steel may be a perfect fit.  If players own the game for both PlayStation 3 and PlayStation Vita, they can use cross save support and continue where they left off on either platform. The title is expected to release on December 15th this year, and will have a special launch edition that includes an art book and a special collector’s case that has space for the sequel that is expected to release next year.

Much like the Earth Defense Force title covered in our preview yesterday, Earth Defense Force 2: Invaders From Planet Space reimagines an older entry in the franchise. Taking the action on the go with the PlayStation Vita this time, fans can expect their favorite content from the original, as well as additional content added to make this the definitive version of the game.

The original title had two classes, the versatile Ranger and the air-soaring Pale Wing. New to this version is the Air Raider, who like in Earth Defense Force 4.1: The Shadow of New Despair, can use explosives, sentry guns, vehicles, and even call in air strikes. All three styles work very differently and have their own paths to master as players gain progress in their quest to crush hundreds of bugs.

Earth Defense Force 2 is considered to be the fan favorite of the franchise, and original developer Sandlot has returned to make this entry even better. Now with 78 missions, each with six difficulty levels, fans have plenty of content to master, and can play the game with up to four players online or via ad-hoc mode. 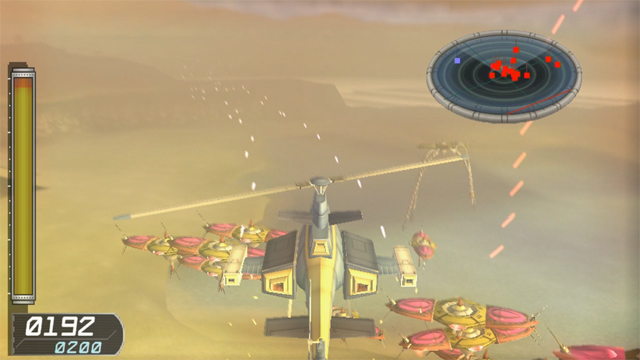 Considering this is on the Vita, it won’t look as detailed or fluid as what we played on PlayStation 4 obviously, but for what it does, it manages to do a good job and still keep things manageable. That’s really all we could ask for considering this remake still packs tons of bugs on screen at once. Taking a simple route, the Ranger was the class chosen for this demo, taking on a large ant arm on the beach stage. It didn’t take long to dispatch them, and they put up a decent fight, but the health drops were plentiful to keep anything bad form happening. I was probably most impressed with how well the game controls on the Vita, as it didn’t impede itself at all on the handheld and still managed to be enjoyable.

One new feature that fans might enjoy more is the addition of a new English dub, which makes it so English speaking fans can focus on the action without having to read any of the subtitles. A new class, new missions, an English dub, and new ways to play with friends make this a definite must-have for anyone that was a fan of the original. Fans won’t have to wait long either, as this one drops only a month from now on November 24th.

That’s it for the XSEED Games Fall Preview coverage, and we thank them for having us come out and play these fantastic games. For more news on these games and more, keep watching GotGame.