Last week, XSEED Games and Marvelous hosted an event for GotGame and other press to come out and try all their new games. Not only did they have six games on hand to show off, but they also announced three titles coming to PC: XanaduNext, Little King’s Story, and Senran Kagura Shinovi Versus. The games on hand for the event ranged from console titles to handheld ones, covering genres like role playing games, action games, and even a fighting game. The first three titles covered will be Nitroplus Blasterz: Heroines Infinite Duel for PS3 and PS4, Senran Kagura: Estival Versus for PS4 and PSVita, and Earth Defense Force 4.1: The Shadow of New Despair for PS4. 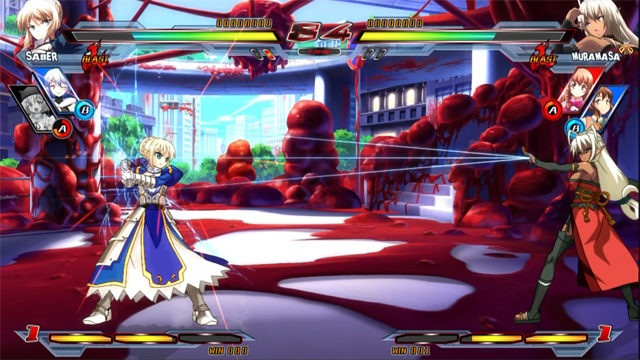 Two-dimensional fighting games can be a mixed bag sometimes. If it isn’t Street Fighter or Mortal Kombat, they sometimes fall into obscurity and only get played based on word of mouth. Due to the nature of this title, it may very well need the word of mouth to spread. Nitroplus Blasterz is a crossover fighter featuring various female characters from visual novels and games published by Nitroplus as well as anime that some of the Nitroplus writers have worked on. Some of these characters are fairly recognizable, like Saber of Fate/stay night fame, or the Nitroplus mascot, Super Sonico, who was added as a playable character in the console versions. Most of the characters are recognizable only to fans of Japanese visual novels, so the gameplay may need to gain it enough notoriety to get an audience.

Luckily, the game is actually really fun, not to mention very competitive. Players will choose a main playable character from the roster and then two assist characters from even more franchises. Controls can be compared to many other fighting games like Blazblue, the characters having a light, medium and heavy attack, the latter of which can actually break shields if used properly. Assists are assigned to their own button as well and players also have an evade button, allowing for them to dodge attacks and block. 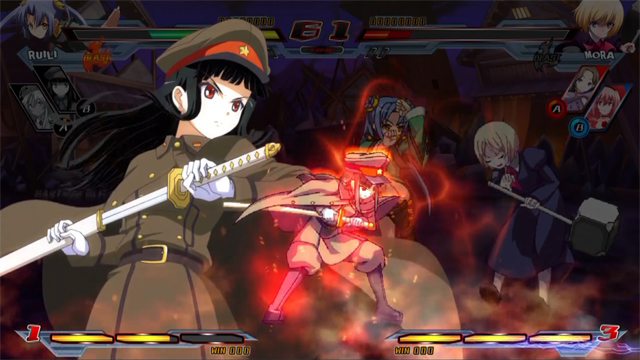 Players will gain energy for their meter (up to three bars) throughout battles while their assists charge up. Each character has three super attacks that use up one, two or all three bars of their meter, and if pulled off right, the results can be devastating for the opponent. Assists can be very powerful as well, especially if used in combinations with both involved. One powerful combo involved the characters Yuki Takeya (School-Live!) and Natsumi Aibara (Hello, world.), where Natsumi rode in on her scooter, riding across the screen while Yuki gets summoned after. Natsumi rides back from behind the opponent and Yuki, followed by several zombie girls, proceeds to trample the opponent for massive damage.

Combos come out fairly easily and all the characters feel incredibly unique. Sansei Muramasa (Full Metal Daemon: Muramasa) was a personal favorite, as she played fairly similar to how Spider-Man plays in the Marvel vs. Capcom series. She uses webs to latch onto opponents and pulls herself forward into quick and unexpected combos, giving her a lot of opportunities to get close to her opponent. Ethica from Tokyo Necro was more of a grappler type, and when she pulls off her level one super attack (a grab attack), it can be combined with a second one where she cuts into her opponent with a chainsaw. Given over a dozen characters to choose from, players can easily find a favorite play style among the bunch. 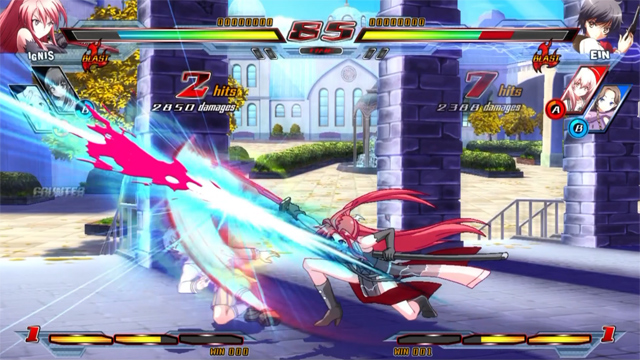 Nitroplus Blasterz will have online play that will be cross-platform between PlayStation 3 and PlayStation 4, which is good because that will mean that no matter which console players buy it for, they’ll be able to play with the full community. Hopefully that gives it the recognition it deserves, as the game is a blast to play, even when pandemonium takes over the screen. Nitroplus Blasterz: Heroines Infinite Duel hits the states next year. 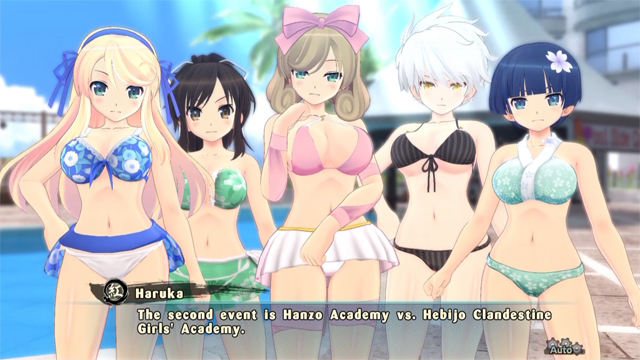 XSEED had previously shown off the PS4 version of Senran Kagura: Estival Versus at E3 this year, this being the home console debut for the series. Many of the fan favorite busty ninja girls have returned for a festival that takes them to a warm summer island, but not all is what it seems. Over two dozen characters fill the roster of this hack n’ slash title, all carrying unique weapons and combos to take out dozens of enemies at once.

If anyone picked up Senran Kagura 2: Deep Crimson for the 3DS earlier this year, or any of the other games in the series, they’ll know what to expect. Players will take on missions and use deep and flashy combos to take on a plethora of enemies until one or more of the main characters challenges you to a fight. Typically, these fights get pretty intense, one or more of the characters usually losing some clothes in the process. Most of the standard enemies are easy to take down, but sometimes they become a bit more challenging. In my demo, one of the enemy types was particularly challenging, women wearing Kabuki masks that would block practically any attack until they would strike. It’s at least nice to see that not all enemies go down easy until facing the busty brawlers. 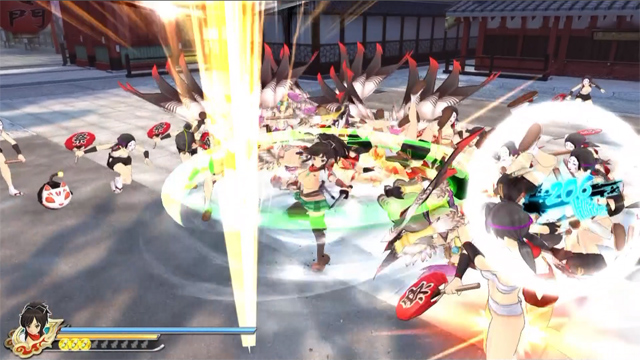 As players progress through the game, they earn experience and level up their skills up to level 50. Players can take quite a while to level up their favorite ninjas, and they can even dress them up in a variety of outfits, some of which can be modest, but many of them revealing. If the player is skilled enough, they may be able to make it through missions without losing their clothes, unless of course they use their special Shinobi transformation, which temporarily has them undress only to put on a special outfit, allowing the player to build up their Yang Affinity. With this, they are capable of more devastating combos and faster maneuvers.

In the couple missions played during this demo, most of the enemies were mowed down (minus the Kabuki mask opponents that required a bit more strategy). There isn’t much variety in enemies, each mission having typically two to four enemy types, only one character model used for each. It isn’t that big of a problem considering the real fight comes into play when other ninja girls from the four academies appear for battle. These battles can be tricky in the situation there are more than one opponent, as these fighters are just as skilled as the player character, even capable of their own Shinobi transformations. The only real complaint with the combat was the camera, which unfortunately could fare better in the more challenging fights. Regardless, the visuals are stylish and definitely full of fan service for the fans of this popular series.

The game has an online multiplayer mode, where up to ten players (four on the PlayStation Vita) can fight in deathmatch battles, be it free-for-all or on a team, or compete in various other modes. These modes weren’t on display for the demo, but one has to be curious as to how the “Capture the Bra” game mode goes. Senran Kagura: Estival Versus comes out for the PlayStation 4 and the PlayStation Vita sometime at the end of this year, but may release early next year. 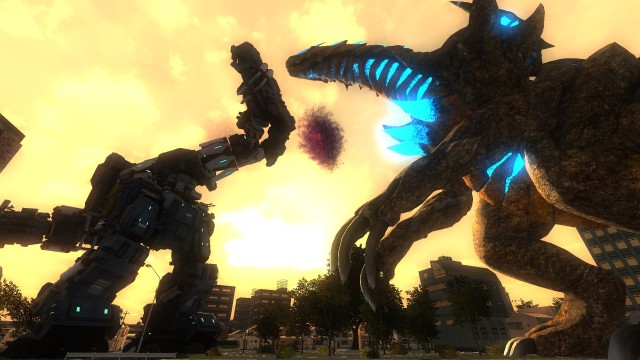 With four playable class types, the Ranger, the Wing Diver, the Air Raider, and the Fencer, the title has a lot of variety. During the demo, I played as all but the Ranger, getting a chance to traverse the skies as the Wing Diver, summon tanks and plant explosives as the Air Raider, or even bringing in the heavy weaponry of the Fencer. Of those classes, the Wing Diver seemed to be the most user friendly, allowing easy traversal and accessible weaponry. The Fencer, while much more advanced, became really fun to play as once the proper technique was utilized for movement. As one of the XSEED staff members suggested, the Fencer can dash forward with one of the shoulder buttons, using the other shoulder button to launch a javelin, therefore canceling the dash and allowing for another one, which would otherwise require recovery after use. 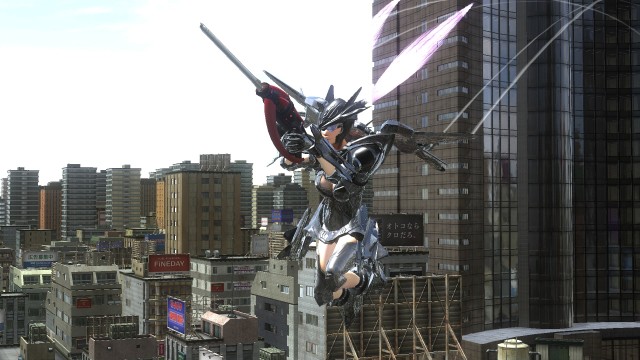 The game offers tons of giant monsters, mostly insect-like in nature, but can even include giant monsters similar to iconic Japanese movie monsters like Godzilla. Players will have tons of weapons to choose from and will earn more as they play through the game, ranging from portable cannons, air strikes, homing lasers, and even giant robots to pilot. Many of these weapons have specific power levels that make the higher level ones perfect for more challenging missions, the game now boasting 98 missions total. Environments range from cities full of buildings to wide open beaches, giving a nice change of variety in settings.

Multiplayer is offered in the form of co-op missions or even versus battles, with two player split-screen or four player online co-op. The versus mode can be very interesting, as most of the weaponry was designed for larger targets, so fighting against a small opponent often makes many of the weapons less effective. The most fun in these battles came from both players using the Wing Diver class, as this allowed for some intense aerial battles with various ranged weapons and plenty of hit and run tactics. Using any other class seemed to put the player at a disadvantage, as the Wing Diver had the best maneuverability and options available. 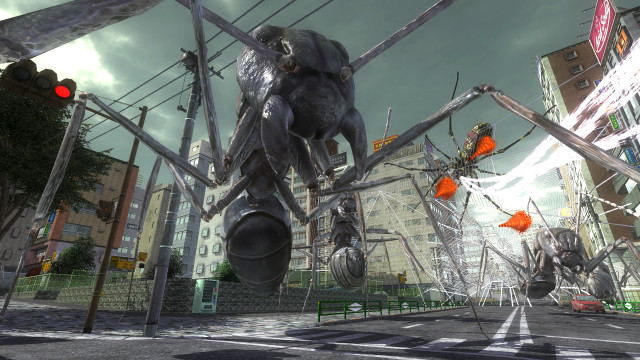 All three of these games were a blast to play, and XSEED had much more to offer, so make sure to check back tomorrow on GotGame for part two of our preview coverage where we cover Return to PopoloCrois: A Story of Seasons Fairytale, The Legend of Heroes: Trails of Cold Steel, and Earth Defense Force 2: Invaders From Planet Space. Also feel free to watch our GGTV feature with Junpei Doi playing Earth Defense Force 4.1: The Shadow of New Despair.