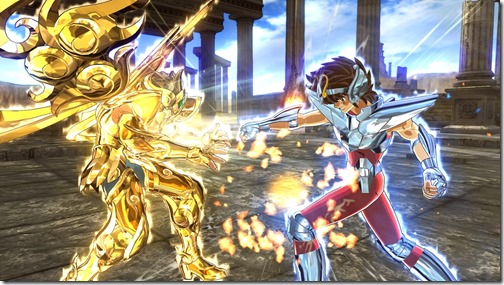 Saint Seiya: Soldiers’ Soul is the latest video game entry in the popular Saint Seiya franchise, aiming to bring cosmic battles on the PlayStation 3 and PlayStation 4. Gamers interested will need to pick up the title from the PlayStation Network, though there will be physical editions available in Latin American countries. In addition, a Steam version has been confirmed, and will be available later this year.

The title is set to take players on a journey through the Sanctuary story arc to battle with a rogues gallery of enemies, eventually leading up to a final confrontation with the mighty lord of the underworld, Hades. As you progress through the game, you’ll also be able to uncover additional surprises and challenges.

Eric Hartness, BANDAI NAMCO Entertainment America’s Vice President of Marketing, stated, “Saint Seiya has enjoyed incredible success around the globe for 29 years starting with the original Japanese manga in 1986. We’re thrilled to present this Saint Seiya game to PlayStation®4 system players and to provide our fans in Latin America the original Saint Seiya anime voice over cast in Neutral Spanish and Brazilian Portuguese for the first time ever.”