There are plenty of virtual cards games competing in the mobile space right now, but one of the growing ones is based right out of St. Louis, Missouri. Cards and Castles has been around for roughly a year and a half on iOS and Android, but the team behind the turn-based-strategy/card game hybrid are working on expanding the game to PC as well. I talked to them at PixelPop this year, and they recently ran a beta for their Steam version; I was able to get hands-on with it for a couple of days before it shut down. After trying the PC version of the game, I reached out to Matt Siegel, Lead Developer at Bit Mass to learn more about the future of the title. Though he’s been dealing with the joys/sleep deprivation of having a newborn baby in the house, he was still able to put aside some time for me to pick his brain. 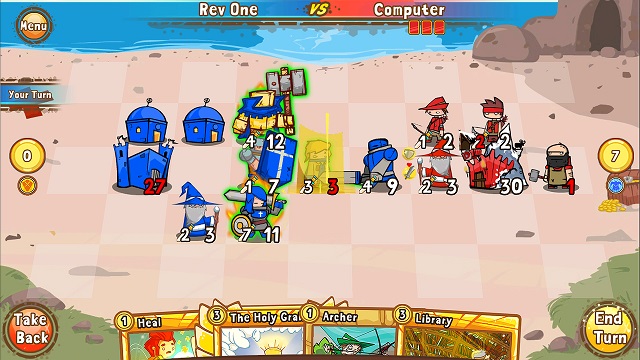 Cards and Castles feels like a mix between mobile card game titan Hearthstone and the turn-based strategy of Final Fantasy Tactics, but with a touch of the light-hearted presentation of Castle Crashers. Each player starts with a castle set in position on a 5×9 grid and summons various cards to the battlefield to take down the opponent’s castle. There are unit cards with various abilities, ranges, and attack strengths, while you can also summon additional buildings to your side of the field to supplement your team as they invade the enemy. Many cards belong to factions, teams of cards like Pirates, Ninjas, or Wizards, each with their own play style and advantages. Don’t let the cute artwork fool you, though; underneath the brightly-colored design is an intricate card game which is easy to pick up, but difficult to master. Siegel is a big fan of competitive games like arena-brawlers Super Smash Bros. Melee and Rivals of Aether, and that competitiveness translates into the game.

According to Siegel, he’d originally worked on the idea of creating a strategy game, but he wanted to add an element of randomness to so that it wasn’t just a matter of people playing the same unit builds over and over again. He considered adding a deck of units to randomize what units players would get access to, and the idea spiraled out from there. Currently, Cards and Castles has many of the features seasoned card game players would want: net-based online and asynchronous multiplayer, multiple expansions with additional cards to gain, and a booster draft tournament format. Now, with over 50,000 users on the cross-platform mobile client, they have plans to expand the game’s reach with a PC version and their first single-player focused expansion, the Warlock Academy. 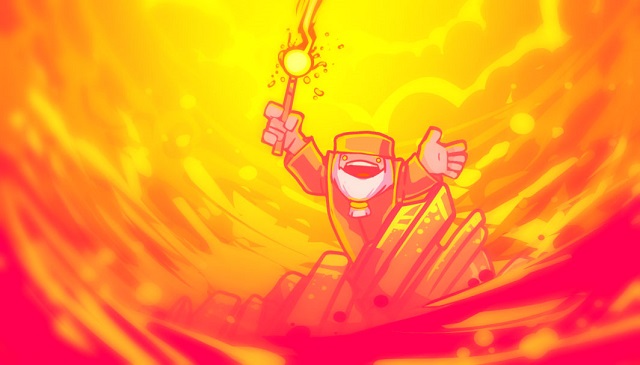 “Honestly, I’ve been most happy with our recent work,” Siegel said on a call with me. “I feel like we keep getting better at this. The Warlock Academy introduces a new card trait called “Awaken” where units with have a dormant ability that’s activated later in the game. The Warlock Academy also introduces Headmaster Saurus as well, a Legendary card obtainable through the single-player campaign that can activate all Awaken abilities currently on the board. I tried to pull some details out of him, but he said he really shouldn’t be giving out spoilers. “The Warlock Academy, there are some really unique combos,” he hinted.

I asked Matt about expanding the game to PC, and if there were additional features they planned on utilizing with the expansion to Steam. “We might be able to integrate with Steam’s leaderboard functionality…but no, we really intend to make them the same game; they’re really cross-platform, so they really should be the same game.” The Steam beta did very much feel like a mirror to the mobile game, though maybe it just looked a little better since it was on a larger screen. Graphically, the layout of the game was the same as the mobile title; though I understand wanting to have parity between platforms, most of the abilities on the cards are simply stated and unexplained, forcing players to just experiment to learn what particular traits do. I asked Matt about this earlier in the interview, and it was like he knew my question before I even asked it. “It’s something we need to add, probably…we just don’t explain it. We’re sort of ok with people just playing the cards and finding out what they do on their own. We would like to have an in-game explainer, tool tip, somehwere, but it’s not a super high priority.” Later on, he mentioned that there’s just not enough room on the cards; that definitely makes sense on mobile where people could be playing on 4.5 inch screens, but with the full real-estate of a monitor, some of that additional text could be helpful. 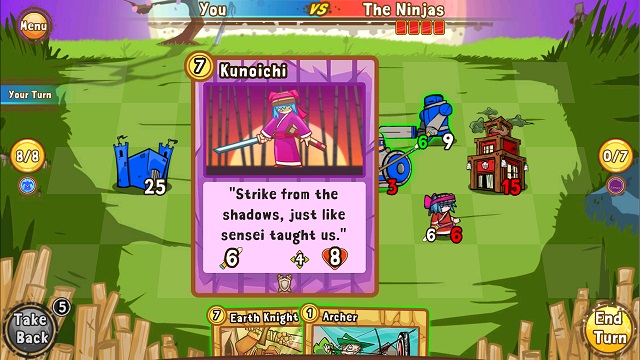 Of course, when you’re competing with games like Hearthstone it’s pretty hard to measure up graphically, but Siegel says the Bit Mass team is fine with that. “That’s why we’re great; all we have is making a good game. We have no brand, we have no previous products, all we have is ‘Hey, we make good games…come play my game, it’s really good.'” And, at the end of it all, Cards and Castles is really good and really fun.

Cards and Castles is currently out for free on the Apple App Store and Google Play Store, with a Steam version available in Early Access. The Warlock Academy expansion releases on October 22, 2015.