Hands-On With NoScope Glasses, Round 3: An Evolving Line of Eyewear 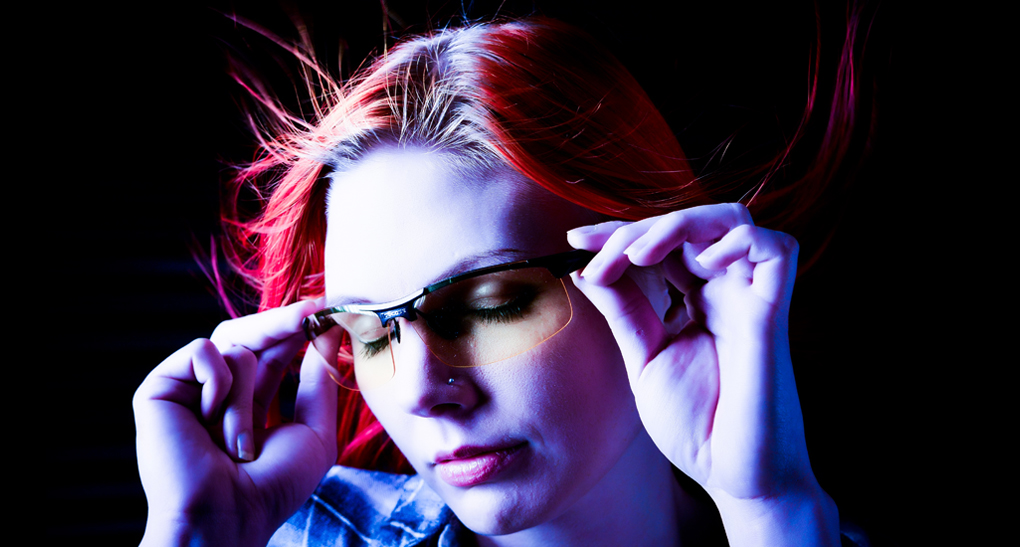 UPDATE: The article originally stated that the Gemini model was NoScope’s first metal-framed model, but the Hydra models actually also had a metal frame. According to NoScope, the metal frame from the Hydra was abandoned for the polycarbonate frame because they’re lighter and easier to wear, which is true when comparing those two models!

Odds are that if you’ve watched professional gaming events, you’ve seen competitors wearing yellow-tinted glasses of various shapes and designs. When you’re sitting in front of a bright screen for hours at a time, protective eyewear reduces eye strain and keeps those baby blues/browns/greens/whatever shielded from harsh glare. We’ve been covering gaming eyewear company NoScope Glasses since they released their original model frames in mid-2014 and second batch in late 2014; now, a year later, they’ve come a long way in designing styles for both gaming and general computer use. The company currently sells four models, all of which they’ve sent to us here at GotGame; I’ve done time with all four models, and they’re the company’s best yet.

Gaming glasses generally come with two main benefits: light filtering, and minor magnification. Increasingly, studies show that we’re doing damage to our eyes from strain due to artificial light, but apps like Twilight for Android and f.lux for PC, iOS and Mac help you sleep better and reduce eyestrain by filtering the light that comes from your displays. If you’re doing console gaming or you’re in the office, you may not have access to these kinds of programs, but you can still get some of these benefits from a good pair of glasses. This market’s been by Gunnar Optiks in the past; they’ve got multiple lens styles ranging from clear lenses for artists to dark-tinted sunglasses, and a ridiculous number of lens and frame styles. But Gunnars are really expensive, and especially for someone who is budget-conscious or trying gaming classes for the first time, the cost can be really intimidating. That’s where NoScope comes in: they have a limited number of styles, but their glasses are a fraction of the price ($25-$30 US) and, based on my experience, provide just as much protection and comfort. They have styles to fit every situation now, from the tournament to the office, and you can afford to get two or three pairs for the same price as one set of their competitors’s. Read on to check out a quick breakdown of each style. 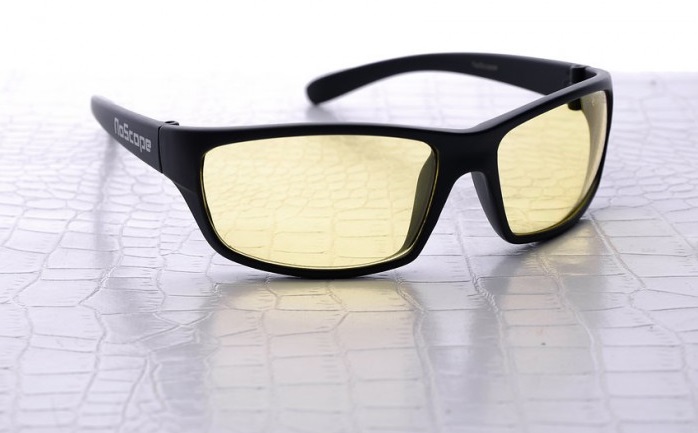 The Minotaur glasses are the most general purpose of the new line of NoScopes and come in Onyx Black (shown) and Frost White. With frames that cover the entirety of the lenses, these frames offer good protection for the lenses, but don’t carry the hard angles or edginess that would really scream “gaming glasses.” NoScope keeps a limited amount of branding on their glasses, with a stamp on the arms of the frames and a minor emblem in the upper-corner of the lens, Most of their new models feature the lens stamp and, though I wish they didn’t, it’s only slightly visible when in use. These glasses, like all of their others, are one-size-fits-most; this means their glasses will fit snugly for most people, but not too tightly. Those with larger heads like myself will feel some pressure behind the ears after a couple hours of use; for those folks I recommend the Golem or Gemini. Still, the subtle style makes these a great choice for the average consumer. 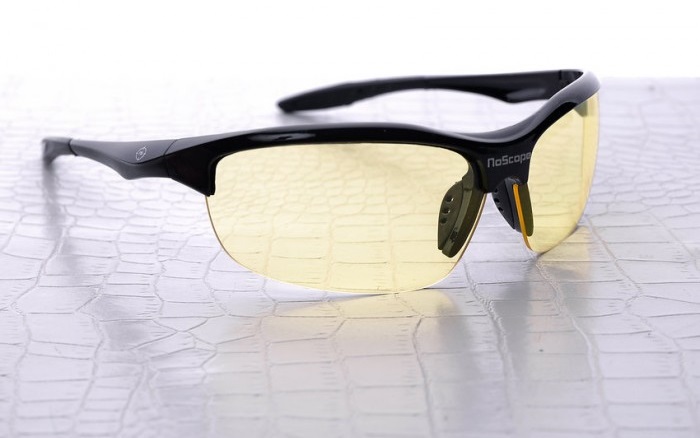 The Wraith is essentially NoScope 3.0, the successor to the original NoScope Demon Series model and their follow-up, Hydra. Wraith features slim, angled frames with sharper angled lenses to show a little more style and flair. They’ve replaced the metal-armed nosepads with rubber ones, which eliminates the glare issues the Hydra had from their shiny, metallic noseguard. With the smaller lenses they’re more likely to let outside light in, but you just plain feel cool when you’re wearing them. They wear well for a couple hours worth of time, and they feature the NoScope branding on the bridge of the frame instead of the left lens, keeping your eyes completely clear for all the fragging you need to do. The Wraith model comes in Onyx Black (shown) and Frost White. 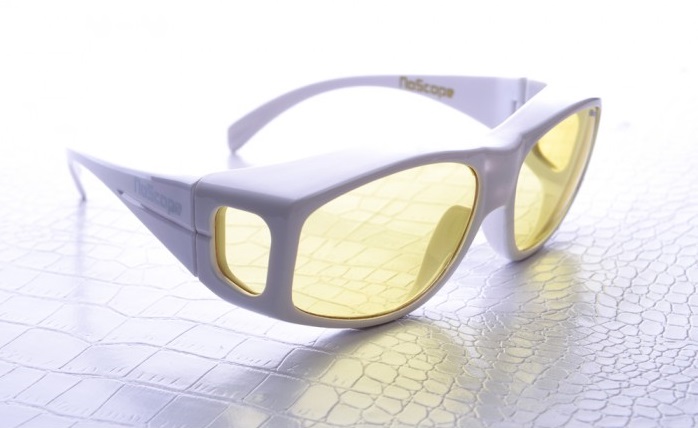 Truth be told, I really thought I wouldn’t like the Golem upon first inspection. They’re the largest of the lot by far, and they look a little bizarre compared to the other NoScope models. That said, after doing some time with them, the Golems definitely take the #2 spot for me of all of the gaming glasses I’ve used. The wide frames and large arms mean that there’s more surface area to distribute pressure over, so the plastic frames still feel pretty comfortable even on my large head. The Golem is the first model compatible with prescription lenses, which is a big deal for those who need more than just a little magnification to help them see. These are also the only model that provide full field-of-vision coverage, so for folks with two or three monitors in their command centers, these do a great job of filtering all the light that comes in around you. The side windows are also really useful, and felt more natural to look out of than I though they would. Definitely expect that you’ll get some weird looks if you’re wearing them at the office or around friends, though; these are the “gameriest” looking glasses NoScope offers, but they’re definitely worthwhile if you like the style. If I weren’t so in love with the Gemini, I’d be wearing these myself (when I’m around the house). The Golem is available in Frost White (shown) and Onyx Black. 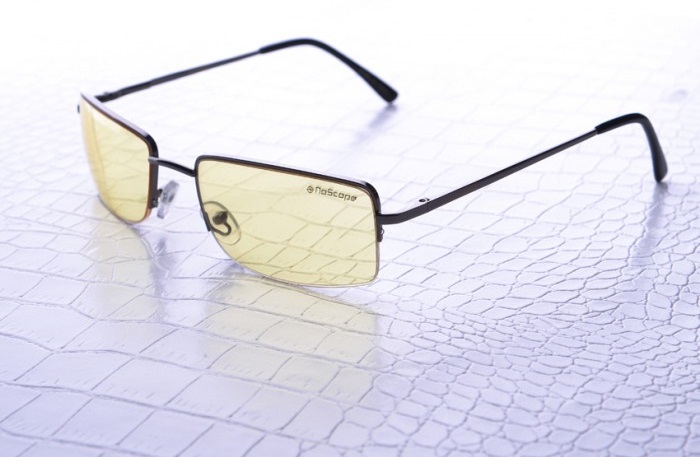 Ladies and gentlemen, these are the glasses I’ve been waiting for. NoScope’s Gemini model is marketed as their office/professional model but I find myself wearing these in almost every screen occasion I’m in. These are the first NoScopes to use metal frames instead of plastic ones, along with spring-loaded hinges. These glasses feel sturdy, dependable, and they look great, too. If you’re in the office, out at a coffee shop, or hanging out with friends, they feel perfectly natural and lightweight, and since they’re metal you can even bend them a little bit at the bridge to make them more comfortable for your face. Though they come at a slight price premium compared to the other models, their versatility, sturdiness, and style make them the far-and-away best choice for the gamer or professional who’s looking for a mix of form and function to suit every occasion.

As someone who spends multiple hours a day every day of the week in front of a screen, it’s important for me to keep my eyes as strain-free as possible. NoScope’s current models are a great way to stay comfortable and protected whether you’re writing papers, racking up kills, or watching YouTube while keeping updated on your friends’ eating habits via Facebook. If you’re thinking about giving gaming glasses a shot, check out NoScope’s website for more information. If you’ve used gaming glasses or are interested in them, leave your thoughts in the comments!