We’ve recently polished off another entry in the popular Disgaea franchise, Disgaea 5: Alliance of Vengeance. Going in, we had high hopes for thie game, but will it live up to these hopes, or would it be better left in the Netherworlds?

Disgaea 5’s story begins as an extremely powerful demonic Overlord known as Void Dark is steadily conquering the various Netherworlds. We see the Overlord of Gorgeous, Seraphina, battling some of his army, known as the Lost, with a bunch of prinnies. Things take a turn for the worst for Serapina, and she is preparing to unleash her Overload power, Balor Gaze, on the Lost army when a strange warrior shows up and decides to eat something in the middle of the battlefield.

This warrior, known as Killia, finishes his lunch and proceeds to completely demolish the Lost army single-handedly. He starts to move on, but Seraphina manages to stop him and force him into the Pocket Dimension that she has.

Together they begin a quest to take down Void Dark, recruiting other Overlords and regular demons as they attempt to topple the powerful being. 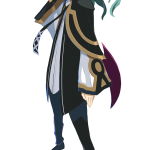 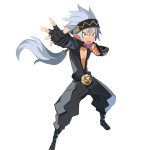 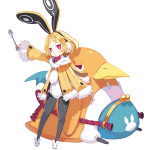 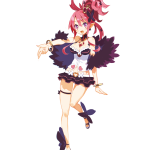 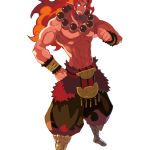 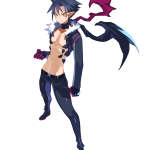 If you’ve ever played a Disgaea game, then you know pretty much what to expect. For those that haven’t, the battles take place on a grid map, and you can deploy a set number of units onto the map. These units will all be controlled (if you choose, otherwise you can just leave them sitting there, defenseless) during your turn as you position them and set up what attacks and skills you want to utilize.
As you string together attacks, you will do more and more damage, thanks to successfully pulling off combos. You will also slowly fill the stage’s Bonus Gauge, which grants you extra rewards depending on how much you filled it up.

In addition, as you play on you’ll be introduced to more mechanics. Some of the returning, classic Disgaea mechanics include Geo Blocks, the Item World, and the Chara World, though each one of these has been refined and, in the case of the Chara World, changed (and we’ll get to the new Chara World in detail later). Overall, most of the improvements you find in Disgaea D2 and Disgaea 4 have been retained, and Disgaea 5 even adds on a host of new improvements.

In terms of combat, perhaps the biggest change is the addition of the Revenge Meter. This meter is slowly filled up as characters and their allies take damage and fall, and, once it has been completely filled, grants several bonuses to them.

A character in Revenge Mode will take less damage from attacks, always land a critical hit, and have all SP costs reduced to one. In addition, if the character in question is an Overlord, they will be able to use a powerful, character-specific ability, known as an Overload. Seraphina, for example, can use her Overload, Balor’s Gaze, to charm all men in a large area. Red Magnus can utilize his Overload, known as Super Olympia, to turn into a giant and gain a huge stat boost, as well as additional range on certain attacks.

Of course, you should be careful, as your enemies can also go into a Revenge state and access deadly abilities. In this state, they are much more powerful, but, if you are able to take down your foes while they are in this state, they tend to drop special items which typically grant characters permanent stat boosts. This opens up a new element to the risk/reward combat, and even makes tank characters more valuable than in previous titles.

Another major feature is the squad system, which is similar to the Evil Symbols that Disgaea 4 utilized. Once you have gotten a squad approved, you can add in party members and designate a leader for the squad. Those who are part of a squad are granted special bonuses, such as everybody gaining a portion of the leader’s EXP or being able to capture weakened enemies.

Also, while in Revenge mode, you can utilize these squads to perform a special move to have every member attack. Enemies will also have squads, and these special squad attacks will actually hit every single member of the enemy squad on the map, making it a good way to clear out some of the larger stages.

You can proceed to level up these squads and even recruit the captured enemies into the squads. You can also decide to make your prisoners take on labor duty on your squads, and, once you manage to assign enough of these prisoners, your squad will gain new powers and abilities for you to utilize.

In terms of core mechanics, they have not changed much from the previous entries in the series, but they have been polished quite a bit. These minor changes add up to a more user-friendly experience all-around. Character creation in previous games, for example, utilized mana, which was quite a precious resource for your demons, as it was also used to pass bills and improve your abilities. This led to having to decide, in some cases, whether to recruit a new character or use that mana for another purpose. In Disgaea 5, however, you can actually recruit these characters using HL (the currency in-game) instead, and even pay more for a higher level recruit.

Another small change is the new Item bag, which allows you to tote around a whopping 2,000 items at once. Thanks to the increased limit, you can take advantage of several items and gimmicks that you couldn’t in previous titles, and also makes the Dark Assembly, where you pass bills for new features and bonuses, much easier to manipulate.

In addition, there are quite a few more 3×3 special moves than previous entries boasted, making it quite a bit easier to grind.

One really nice change, as we mentioned before, is how the Chara World is handled. Rather than the one you may be used to from previous games in the series, Disgaea 5’s Chara World utilizes a board game of sorts. You’ll need to move your character around on a map that is filled with squares that boast both positive and negative effects, and there are special items that you can utilize to manipulate your rolls.

Your goal in this Chara World is quite simple: Reach the goal before you run out of turns. As you land on each square, you may end up boosting things such as your stats, gain better character growth, or even unlock new evilities. If you manage to get to the end, you’ll gain the ability to gain even more permanent buffs and bonuses, which tends to lead to you wanting to spend as many of your turns on the board as possible. Of course, if you do, you run a risk, as misjudging your time can lead to a penalty. Overall, this mode is simple and rather enjoyable to play.

When all is said and done, Disgaea 5 tends to be a game of small changes, focusing more on refining and polishing features rather than making any sort of radical changes. This is both good and bad, as the polishes really make some of the features shine in the title, but may not be enough to recapture Disgaea fans who’ve burned themselves out on previous games.

The game also doesn’t really take advantage of the PlayStation 4’s capabilities, making it only a small step up from previous titles both performance-wise and visually. The sprite work and animations in the game are typically great, and the characters are large and well-animated, but Disgaea 4 wasn’t much worse in these regards.

In terms of mechanics, however, Disgaea 5: Alliance of Vengeance easily steals the show from the previous entries, and is the strongest in the franchise. Almost all, if not all, of the changes it makes is for the better.

Disgaea 5: Alliance of Vengeance features quite a bit to like for both long-time fans and newcomers. Fans of strategy RPGs, anime-style humor, and amazingly huge numbers should definitely enjoy the game.