After a slight delay, and continuing off of a preview from a few days ago, this preview will cover the remaining games from the Rising Star Games press event. Poncho and One Upon Light will be a normal preview, but since Lumini has been released at this point, this will act as a review for that game. 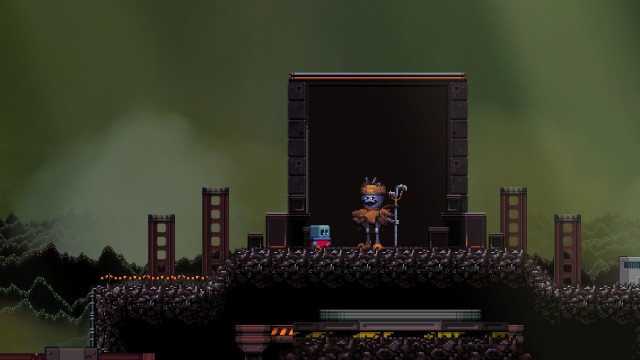 Releasing for PlayStation 4, PlayStation Vita, Wii U, and PC, Delve Interactive’s Poncho is a retro platformer that puts emphasis on exploration. Stepping into the role of a robotic boy, Poncho, players will find themselves escaping a building, acting as a tutorial for the game. Players will quickly learn about the red gem currency and gathering keys to open various gates. The main ability that players will learn is the ability to shift planes. Using the left or right bumpers/triggers of a controller, players will shift either to the background or the foreground of the environment.

After escaping the building which is seemingly about to be destroyed, a little cutscene plays. Poncho hears the words of who he believes to be his father, a human who built him. Not long after, he is dropped into a world that is devoid of human life. Robots randomly populate the world in all forms, from other robot people to robotic frogs, showing that this game takes place after humans have died out. The goal of the game however is to find your father and try to restore humanity in the process. 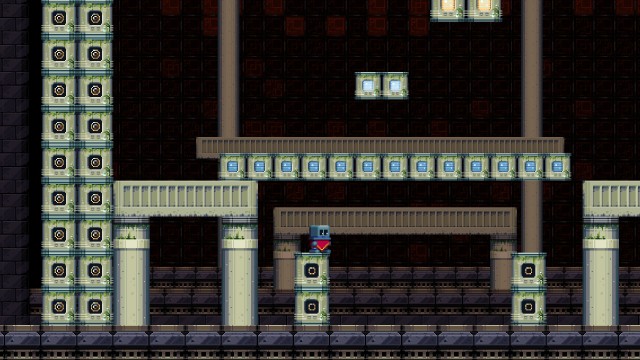 As Poncho explores an open-world, more clues to what happened will be revealed, as robotic residents will say various phrases that might be jokes, nonsense, or something more. There are no levels in Poncho, simply areas you can choose to explore at will using keys. Poncho will gain new abilities on his journey that will get him past other obstacles and help him uncover secrets. One of the first abilities will be a ground pound like move that allows him to slam into the ground and open up hidden areas in the ground.

Perhaps one of the best parts of Poncho is the very soothing yet curious chiptune soundtrack. Listening to it with the visuals gives it a sort of Earthbound vibe, minus The Beatles inspiration. One can really sense the robotic post-apocalypse with a hint of despair and hope mixed in. Poncho looks to be an interesting game for fans of retro style and emotional stories, and the good news is players don’t need to wait long. Poncho will release next week starting on September 10th for a suggested retail price of $14.99. 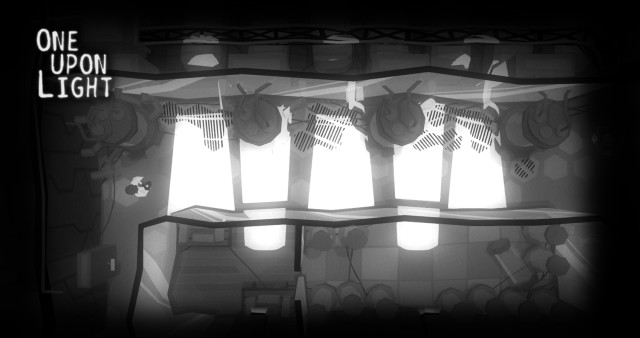 SUTD Game Labs wanted to make a game that utilized shadows in an interesting way. In One Upon Light, players will play as a scientist that is trying to escape from a lab that is falling apart. This should be easy for a normal person, but unfortunately, the main character has a bad reaction to the light. Needing to maneuver through the shadows, players will have to use special timing, puzzle solving, and quick thinking to get through each of the 20 stages.

With a monochrome visual style, the game quickly shows the use of pushing blocks in front of light sources to create shadows for getting past areas of light. There will also be moments when objects move in front of the light source and players will have to time their movements to get by the light. Finally, players will utilize switches that will pick up blocks as they run along a track. Sometimes this will require following the shadow so that players can pass through areas, or sometimes it will be needed to move the block somewhere else to block the light. It makes a fun little challenge and given that movement is bound to a grid-like system, it can add some difficulty when trying to determine movement and space. 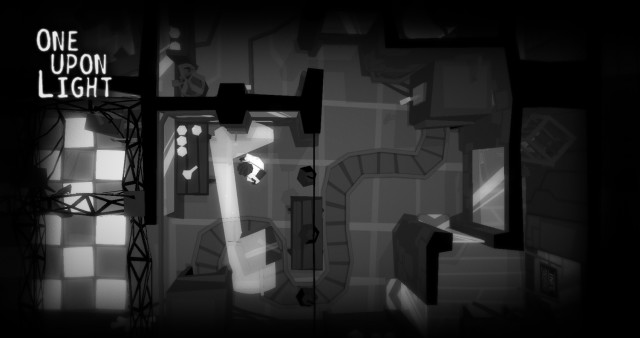 Players will soon gain a new ability, meeting up with another scientist that will give the player the tool to freeze shadows. Using this mechanic, players can use frozen shadows as well as real time shadows, so if a stretch of light is too wide, the player can use one block and freeze the shadow, then move the block a bit further and use the two shadows combined to get through. It also works on moving shadows, so freezing a shadow in just the right moment can make the right pathway.

Exploring the environment can bring the player across newspaper articles that will further explain the story, revealing more little tidbits about the characters and the world. The game doesn’t really utilize music but instead sounds of ambient echoes from moving pipes and debris. It creates a really cool atmosphere and works well with the gameplay. Each stage seems to progress in difficulty and even introduces new elements, so it may be possible that One Upon Light holds even more surprises. One Upon Light will release soon for the PlayStation 4, though a Steam logo on the promo material suggests a PC release in the future as well. 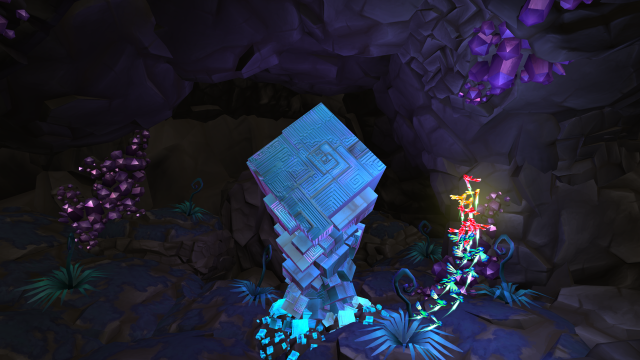 Lumini is a game of relaxation. Never too tense of a situation, Speelbaars wanted to create a game that players could move through while listening to the soothing music and sounds of the flying fish-like creatures. Lumini come in four varieties, starting with the basic purple Lumini. Blue Lumini have a special boost ability, Red Lumini have a powerful shockwave attack, and Yellow Lumini have a special lighting chain that helps gather collectibles and even senses what direction more would be in. The game feels almost like a combination of Pikmin and The UnderGarden, keeping an enchanting looking environment while maintaining several multicolored creatures.

As players collect little dandelion-like energy, they redeem it at checkpoints to earn more Lumini. The game has obstacles like spikes and various enemies throughout, and the game can be completed entirely without killing a single enemy (though there is an achievement for killing every single one). The game is best played on a controller, using both analog sticks to control the Lumini in up to two groups. At points in the game, players will have to separate their Lumini to hit switches or activate motors to open doors. The game keeps each puzzle apart, though since the game is fairly short at only about two hours, it might feel a bit repetitive. 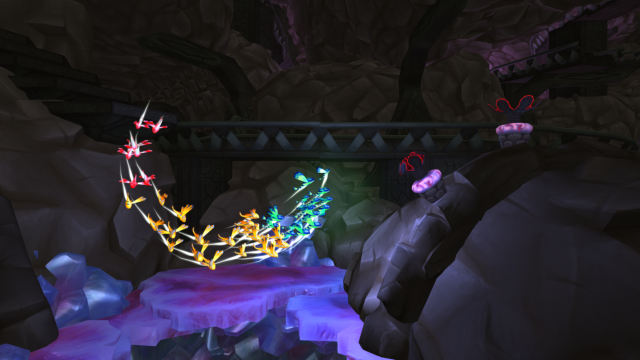 The game has a truly beautiful art design, and each new area looks gorgeous from gem-filled caverns to brightly colored trees. Progressing through the game slowly shows a subtle history of the world, though the game has no narration and no dialogue, so it is really only there for atmosphere. It is hard to say if exploration is encouraged as the game has very little information for the player to know what each thing does. There were yellow energy orbs scattered in hidden areas, though collecting them didn’t seem to make an obvious change. There were also quite a few large purple gems that could be collected, presumably used to unlock concept art for the game, though it didn’t make that clear when collecting it.

Perhaps the best collectible are the evolution gems, as collecting up to two of these per Lumini color would mutate them into a more powerful version of themselves. This made the Blue and Red Lumini especially useful, as maxing them out gave a significant boost and a powerful three-hit attack respectively. There aren’t very many of these gems, so try to find them to make things a bit easier, as they typically tend to be hidden with the purple gems and yellow energy orbs. 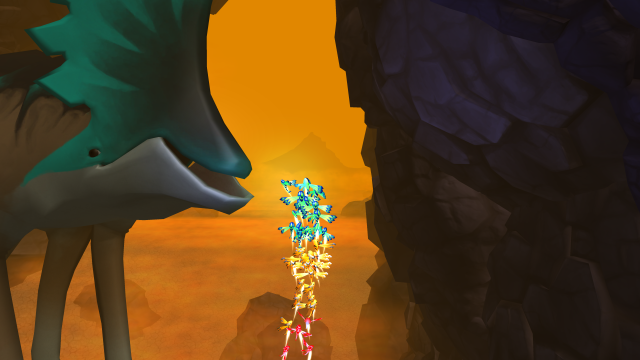 On the technical side, since this is a PC title, this could be dependent on the build of the computer the game is played on, but there are some issues with optimization. Sometimes the framerate can chug, and menus can lag from time to time, especially the options menu. These issues become especially obvious later on in the game when the final challenge emerges, though the game is definitely still playable despite this. It might not be a perfect two hours of gameplay, but it is a nice little change of pace and a quick little game to run through. At $12.99, it might be a little steep for a two hour game, though the game will likely be on sale often knowing how Steam tends to be with pricing. Overall, Lumini is a fun little distraction with a great art design and a beautiful soundtrack, but the game runs a little short of the true potential.