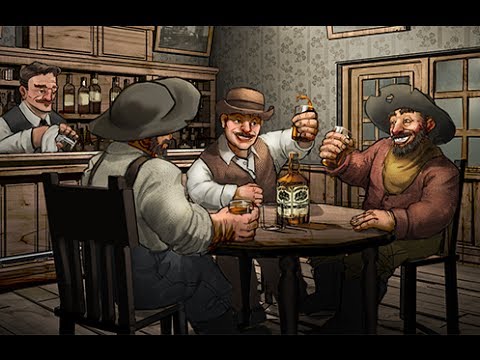 Last year we checked out the game 1849, a city builder that takes place during the Gold Rush that tasks you with developing and sustaining several California cities. Now, with the recent release of 1849: Gold Edition, we’ll check out the expansion and new Epilogue.
Since we have already reviewed the base game, this review will simply be focusing on the additional content.

The expansion, 1849: Nevada Silver, takes place as you head to Nevada for a new fortune after your success in the main game. You are seeking a new fortune, and will need to build and sustain several new cities in Nevada, just as you did for the Gold Rush era California.

The two new chapters, 1849 Epilogue: After the Gold Rush deal with exactly what the title says.

In many ways the gameplay is the same on the expansion and Epilogue chapters. That said, there are a few notable differences.

First, and perhaps most noticeable, is how trading works. Now, as long as you have the DLC selected, you can have your goods be bought and sold regularly instead of being forced to reopen the trade menu every single time, thanks to the new Trains features.

Unfortunately, for gamers who love the Sandbox, the trains actually cut back a bit. While the original title allows you to go up to a “Boundless” city size, the DLC only goes up to “Huge”, due to the fact that (by appearances, at least) the train has to be on the edge of the map.

More additions include new buildings and missions, as well as changes to some buildings. For instance, the Saloon has been transformed into the Casino.

Fans of 1849 should be able to enjoy the expansion and additional Epilogue missions. Of course, fans will likely already have the base game, and just buy the expansion seperately.

Those that haven’t checked out the game yet, but enjoy city-building games would probably enjoy 1849: Gold Edition. Overall, however, the expansion and Epilogue don’t offer enough to drastically change the initial score, but they do offer up enough to bump it up a bit.