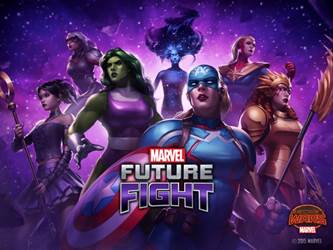 For those wondering, the Marvel Secret Wars comic storyline combines multiple Worlds and characters onto a single planet known as Battleworld. Here an epic adventure will determine the course of the Marvel Universe’s future.

This update features new character uniforms pertaining to the highly anticipated storyline, granting beloved characters such as Iron Man, Captain America, and Black Widow all new variants. The update also introduces players to three new characters from the Secret Wars universe, allowing you to take control of the Secret Wars: A-Force team. This team, lead by the mighty She-Hulk, includes both the powerful sorceress Sister Grimm and the cosmic-powered hero Singularity.

Seungwon Lee, President of Overseas, Netmarble Games, stated, “With the Marvel Secret Wars storyline currently being unveiled, we wanted to provide our players with the latest content aligned with the comic book releases. As the Marvel Universe continues to expand, we aim to keep MARVEL Future Fight up to date in hopes of keeping our fans continually entertained.”

Here are some of the features, as presented by the official press release:

What will be the fate of the Marvel universe?