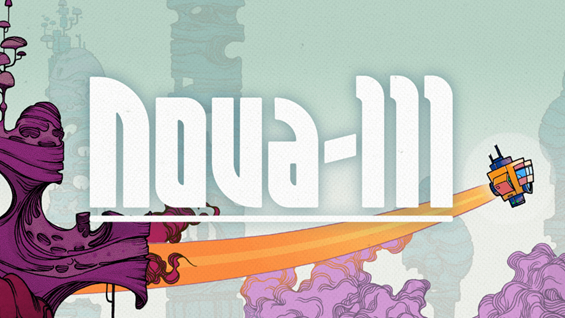 Recently Curve Digital and Funktronic Labs were thrilled to confirm the official release date of their upcoming science-fiction adventure game, Nova-111. This title, the brain child of ex Q-Games developers Eddie Lee and Kalin (who previously worked on several well-received titles, including the PixelJunk series), will be arriving on Steam, PlayStation 3, PlayStation 4, and PlayStation Vita on August 25, 2015. Xbox One gamers will be able to pick up the title on August 28, 2015, and a Wii U version will follow shortly after that.

Nova-111 has been a mainstay in the American expo scene since its announcement, managing to claim awards at both PAX and SXSW, as well as being named a finalist at Indiecade 2014. It’s a sci-fi themed adventure that will allow you to utilize both real-time and turn-based strategies as you take on enemies and solve puzzles while piloting your trusty orange vessel through mysterious and foreign planets. You’ll also navigate mind-warping puzzles and take on bizarre astrobiological creatures.

Here are the game’s key features, as presented by the official press release:

Eddie Lee, co-founder of Funktronic Labs, stated, “With Nova-111, we really wanted to create a fresh spin on the turn-based strategy genre and we have been completely blown away by the support and reception that we have received so far. We can’t wait to see what players think of our game.”

“The team at Funktronic Labs had an awesome vision with Nova-111,” Managing Director at Curve Digital, Jason Perkins, adds, “and when I first played the game, I was genuinely impressed with the quality, design and game mechanics they had created. We have had a blast helping them bring the game to consoles and we hope everyone enjoys exploring outer space when the game lands on August 25th.”