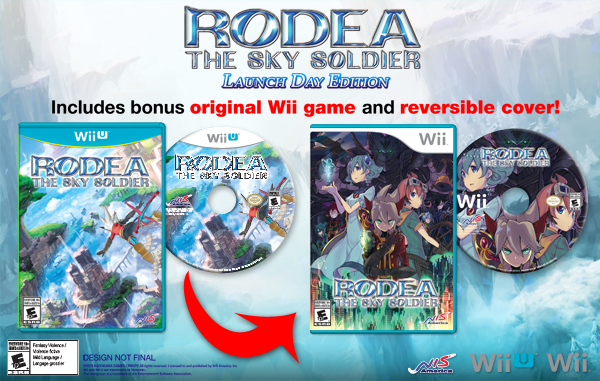 Unfortunately, Nippon Ichi Software America had some disheartening news recently. This news involves their upcoming Wii, Wii U, and 3DS title, Rodea the Sky Soldier. Specifically, the game has been delayed until November 10, 2015 for North American gamers and November 13, 2015 for European gamers.

To offset this bad news, perhaps, they had a special announcement for Wii U gamers. The first print copies of the Wii U version of the title will come complete with the Nintendo Wii versions as well, as well as a reversible cover for both North America and Europe.

The 3DS version will contain a limited soundtrack inside a collectible box. Of course the Nintendo Wii U and the DS versions will both be available on the Nintendo eShop as digital downloads as well.

Nippon Ichi Software America went on to state that the delay is so that they will be able to deliver us the best gaming experience possible in Rodea the Sky Soldier. Will it be an outstanding game? We’ll find out on November 10!