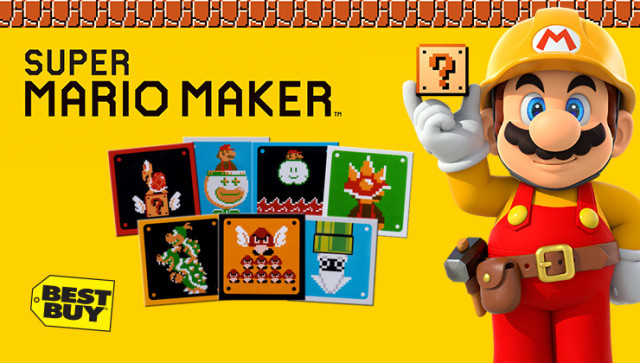 Nintendo quietly revealed that fans who pre-order at least two select Nintendo 3DS or Wii U titles from Best Buy will receive a set of Super Mario Maker themed buttons. These buttons were the ones handed out at E3 2015 upon playing certain games, minus a couple others (notably the Super Mario 30th anniversary button and the golden one for playing Super Mario Maker on the stage demo). The list of eligible games seems to cover most of the first party lineup for the rest of the year, as well as a couple third party titles.

The eligible games and links are below.

This deal seems to apply to online orders only, as coupons will be delivered in December, though it is unknown if this will work for in-store pre-orders too. We’ve reached out to Nintendo for clarification. Take note that a My Best Buy membership is needed to qualify for the offer, so be sure to sign up if you’re not already a member. A Gamer’s Club or Gamer’s Club Unlocked membership is not required, though Gamer’s Club Unlocked members will receive a 20% discount on the games they pre-order, so it isn’t a bad deal to sign up.