At long last, Rocksteady Studios’ Batman: Arkham Knight has finally released to the world, marking the franchise debut on the current generation of platforms. For years, this franchise has shown that a video game based on a high profile comic book license can work, not only in the storytelling department, but also in the gameplay department. Batman: Arkham Knight is the cap to the trilogy that Rocksteady started back in 2009 with the stellar Batman: Arkham Asylum, so expectations were going to be high. For those who are on the fence of jumping into the latest Batman title, let it be known that it definitely lives up to those previous expectations. 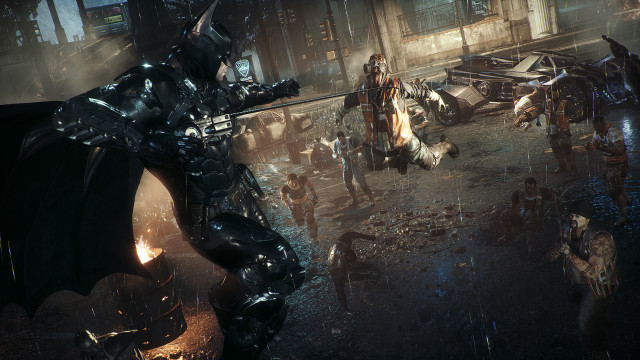 The game has a new storyline that pits Batman against the Scarecrow as he teams up with the mysterious Arkham Knight, the namesake of the game. He comes from Batman’s past and wishes nothing but ill will towards the caped crusader, wanting to take his revenge through any means necessary. This title utilizes the hardware in a phenomenal way, creating a large Gotham City full of criminals, fantastic textures, and incredibly detailed character models. The game holds up great, having a pretty stable frame rate, no loading between areas, and a pretty polished presentation throughout.

One of the biggest additions to the game was the fact that players can finally drive the Batmobile in an Arkham game. What they also got was a new tank transformation that can be unleashed just by holding down a trigger. Now even though the Batmobile is one of the most iconic parts of the character, it definitely feels like Rocksteady wanted to shove it down the player’s throat.

While the vehicular gameplay isn’t bad, a good three-quarters of the game involves using the Batmobile, whether fighting a group of drones, driving through the Riddler’s courses, or just finding ways to make it so the Batmobile can have access to an area to progress the story. Normally this wouldn’t be so terrible, but considering that the Batmobile is a new feature of the series, it shows inconsistency with how Batman solved his problems in the previous titles. Batman: Arkham City refined the gameplay and used it in smarter ways while Arkham Knight typically just wants the player to find a way to get the Batmobile from point A to point B. 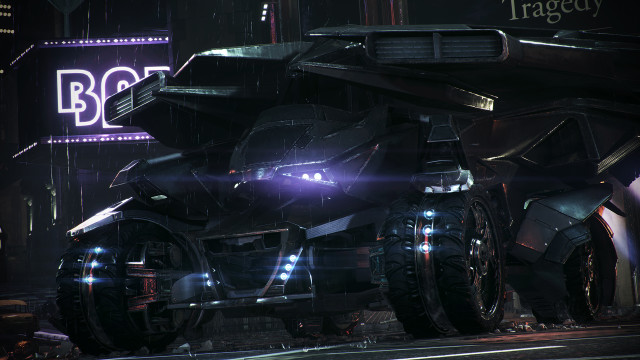 There are still moments for predator missions and freeflow combat scenarios (which incidentally can also involve the Batmobile with special takedowns). The side missions still have a good amount of variety with the various “Gotham’s Most Wanted” missions, giving Batman a bevy of supervillains to take down over time. Two-Face uses henchmen to rob banks, Penguin supplies weapons to the criminals of Gotham, the Arkham Knight’s militia sets up checkpoints and various other events around the city; there are plenty of villains in Batman: Arkham Knight, but it wouldn’t be right to spoil the surprises.

Speaking of surprises, the game goes through a lot of trouble to catch the player off guard, as it contains jump scares. They are surprisingly well-programmed, as they would be scripted for special circumstances and happen during the gameplay rather than during a cutscene. One has to give the team credit for pulling it off the way they did.

Another surprise that the game tries so hard to keep under wraps is the identity of the mysterious Arkham Knight. While the game gives clues to the identity of the titular character, it always feels like it tries to make the player second-guess themselves. It’s not unlikely you’ll feel a little deceived when the identity is finally revealed, but that aside, the storytelling is still excellent, and the voice acting is fantastic, bringing in a great ensemble of actors like Kevin Conroy, Troy Baker, Nolan North, and even a return for Mark Hamill. 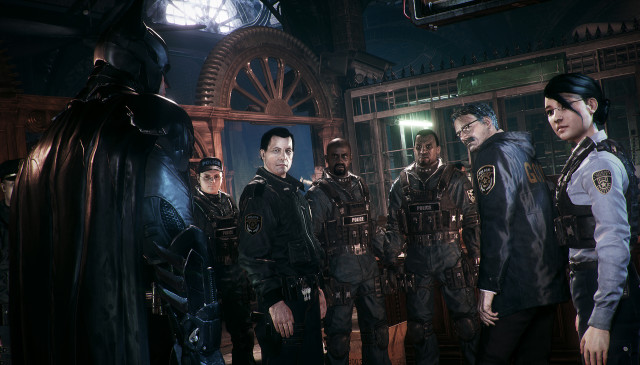 Speaking of Mark Hamill, while not wanting to give away too much, the Joker is in the game, but not in a role that one would expect. One of the best parts of the game is just how well the Joker is integrated into it, and if one had to pick a similar experience, it would probably be Eternal Darkness: Sanity’s Requiem. It’s a great use of the character and perhaps one of the best performances from Hamill’s Joker yet.

Playing though the game, whether gliding over the streets of Gotham or driving through them, one gets a great sense of scale to this title. Not only from the way the city looks but also from the story itself. Everything tries to go out in style, giving some nice closure to the series, as there will be casualties, plot twists, and the stakes have never been higher for Batman. A lot of elements from previous games return as well, like environmental scans for solving riddles, and even the detective vision that debuted in Batman: Arkham Origins.

The game even has a new sidekick system, where players will work with other characters in the game to defeat foes, switching between Batman and the other character on the fly, as well as executing special takedown maneuvers. These fights are only during certain moments, but it works better than just having full-blown missions as the guest characters like how Catwoman worked in Batman: Arkham City. 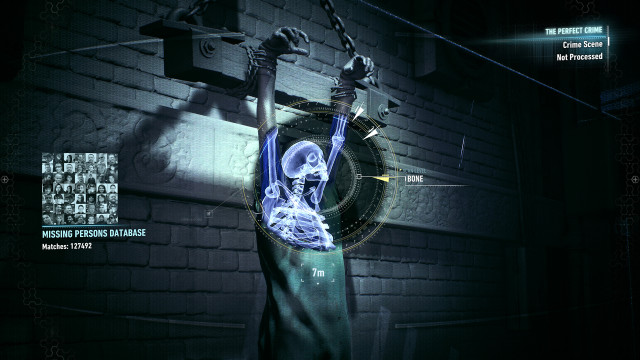 Batman: Arkham Knight is really just the ultimate amalgam of all the previous entries in the franchise while adding a large dose of Batmobile into the mix, creating one epic finale that will keep players on their toes. The gameplay is polished, the story and acting is excellent, and the visuals are beautifully crafted by the folks at Rocksteady to make a truly special tribute to the Dark Knight. Even after finishing the main story, players will be encouraged to finish things 100% so they can see the true ending of the series, not to mention just to be a badass with enough Waynetech upgrades to complete Batman’s skill set.

Despite the overuse of the Batmobile, this is still a true Batman title that makes a worthy title in the collection of games for the Xbox One or PlayStation 4. Unfortunately, PC players may want to wait a bit before jumping on this title, as Warner Bros. has pulled PC versions from most services to prevent issues down the road. Regardless of that, the console versions of the game are definitely true works of art, and no Batman fan should miss this one.