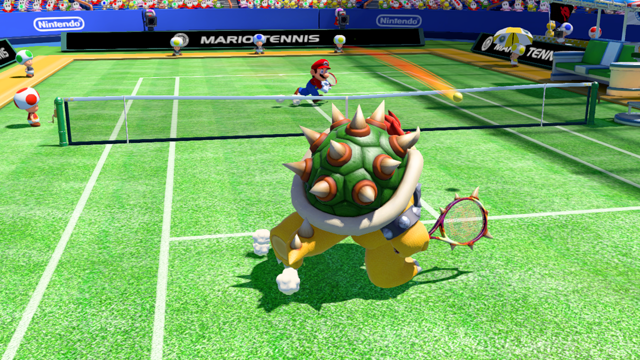 During E3, Nintendo had their newly announced Mario Tennis title playable on the show floor. Mario Tennis: Ultra Smash brings back Camelot as the developer, giving crisp visuals and fantastic music. This being their sixth Mario Tennis title, it doesn’t give them a lot of things to innovate with. Mario Tennis Open on the Nintendo 3DS brought online matches to the series for the first time, so it’s sure to be a feature in Ultra Smash. The GameCube has Mario Power Tennis, which gave all the characters the ability to do special power shots. Not wanting to repeat any features like that, it seems Camelot is focusing on their newest addition, Mega Battles.

The demo at E3 was simple enough, giving people the opportunity to choose either singles or doubles play, though only allowing for competitive matches, no cooperative play. No matter which option picked, the only playable characters were Mario and Bowser, with Peach and Toad making a special appearance in the doubles play as AI controlled players. Mario is the all-around player while Bowser may lack the speed, but makes up for it in power and reach. The demo also only gave players the option to use the Pro Controller, so it is currently unknown what Gamepad features may be implemented in the title. Currently the only Gamepad feature known is that players will be able to see their side of the court on the Gamepad screen. 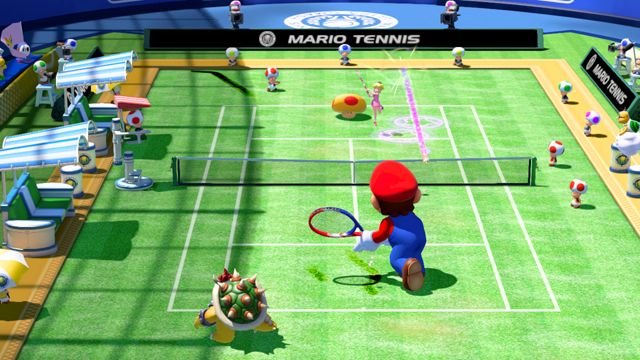 Mega Battles may not make much of a difference for powerful characters, as those matches will start out normal, but after a few volleys, the first Mega Mushroom gets thrown into play. Nintendo hasn’t spoken out as to what activates the Mega Mushroom or how it decides who to give it to, but it tends to go back and forth between players, never giving a player the mushroom twice in a row. Collecting the Mega Mushroom on the court causes the character to increase in size and power, giving a temporary advantage to the larger player. There will be moments when both characters are giant in singles play, though doubles play has only shown two players at a time from the demo so far.

One thing of note is that collecting the Mega Mushroom causes an animation to play. Whatever action that was happening during the moment it gets picked up will have a slight rewind, which hopefully gets tweaked. The game still works, but the effect can be a bit jarring during these moments, sometimes having to hit the ball a second time if the timing was too close. Aside from the Mega Mushroom, the game is still very much like the original Mario Tennis for the Nintendo 64. 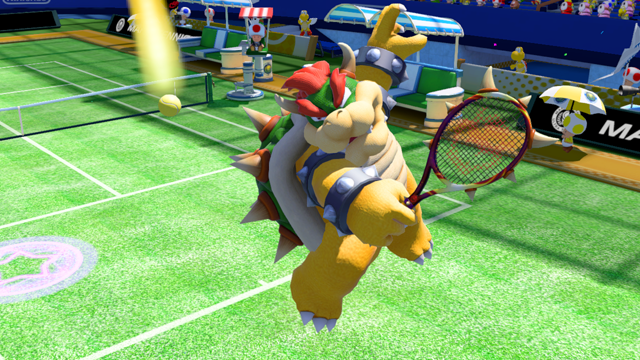 Fans of the series will know to do the staple button combos for lobs, drop shots, while the simple commands will still do topspin, slice, flat shot, and also the simple shot. Hitting the ball to the other side of the court will often place a colored marker for the other player to respond with the corresponding shot. Doing so will cause a powered up version that would often push the other player back further, or spin them out, making things difficult. The best way to play Mario Tennis is always to aim the shots in different spots to throw off the opponent, sometimes pushing them back with a strong topspin, only to get them with a drop shot right after to make them unable to get to the ball in time.

The visuals are still on point, getting a beautiful HD upgrade. The characters are animated well and the effects are still as dazzling as ever. Perhaps a bit underwhelming is the group of characters that watch the match play out from the stands. They’re all flat planes that while plentiful, clash with the rest of the beautiful visuals. It would also be nice to see the presentation upgraded for the full game, as the replays used to be so epic to watch, but now they’ve simplified them to look like pretty standard fare. The game is obviously still in the early works, as only four characters have been revealed and it’s hard to say if the Mega Mushroom will be the only differentiating feature from previous titles. Hopefully Nintendo will reveal more throughout the year, as Mario Tennis: Ultra Smash will be releasing exclusively to the Wii U later this year. 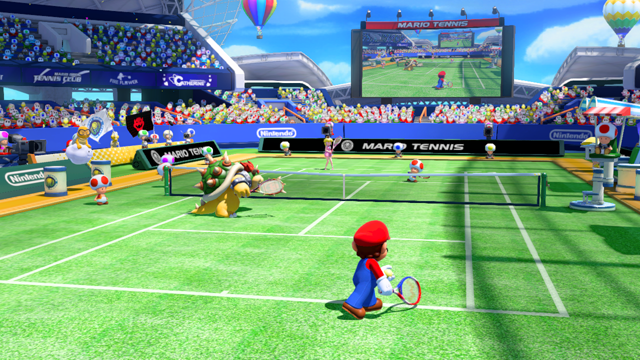