Ten Final Fantasy 7 Moments That Would Be Awkward in HD

Ten FF7 Moments That Would Be Awkward In HD 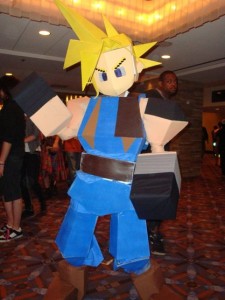 The Final Fantasy 7 remake that everyone wanted is on the way. Part of me is eager to see the classic in HD, yet another part has mixed feelings. On the one hand, I want the experience to stay as true to the original as possible. On the other hands, there are some moments that will simply be weird in HD. 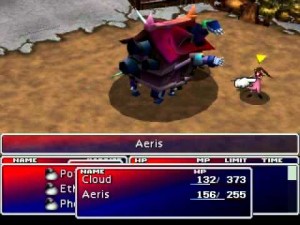 Final Fantasy 7 had some of the best enemies in gaming history. The Turks, the Midgar Zolom, Jenova, Sephiroth, and ummmm… a house…

As if it wasn’t obvious enough that Midgar’s slums were terrible, the developers saw the need to hammer home the point by making the actual architecture in the area attack you. The Hell House enemy looks like something out of a bad Mickey Mouse cartoon with big goofy arms and teeny robot feet. It’s the kind of thing that was already ridiculous in the Playstation original, but would be even more silly in full HD.

Tifa is a good example of a strong female character. Despite her ludicrous proportions, she is portrayed as strong, caring, and loyal. She also happens to be far and away the most physically powerful member or your party. Naturally, when this martial arts expert has a dispute with another woman, in this case Shinra executive Scarlet, she settles it with a good old fashioned slap fight. Because women. Amirite?

This silly, and somewhat sexist, gag was able to fly in the wonky visual style of FF7, but more people will pick up on the sexist overtones in an upgrade.  Or, maybe they could just go all the way and have Scarlet and Tifa settle their differences with a lingerie pillow fight in a tub of pudding. 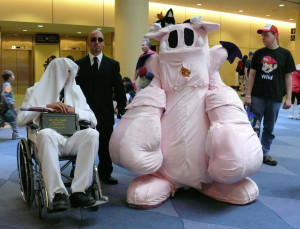 I can picture the Shinra meeting now…

We need to infiltrate Cloud’s group. Any plans?

“Well, we could have one of the members of our elite paramilitary or espionage units pose as an ally.”

“We could bribe one of the many allies Cloud and his group have confided in.”

“We could have one of our executives remotely control a fortune telling robot in the Golden Saucer, hope Cloud asks for a fortune, and have it insist on following him.”

Brilliant! They won’t suspect a thing!

I’m not sure why Shinra thought that was the best way to infiltrate Cloud and the gang instead of literally anything else. The only thing more stupid than Shinra’s plot is that it actually worked. The character was stupid in any resolution, but with more realistic graphics comes more realistic expectations. 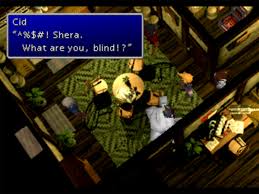 I would assume that the new Final Fantasy 7 will be fully voiced. This raises issues when it comes to two characters. Barret Wallace talked like a sailor, whether he was or wasn’t dressed as one. If Barret needed to wash his mouth with soap, Cid Highwind needed bleach. While Barrett tended to curse in a generic way, Cid’s language was often abusive in its nature. Which raises another issue as Shera just stays with this abusive prick, even when she saved his life.  Bad role model right there.

You can bleep the language, but that would totally ruin the immersion. And if Barret didn’t curse, he just wouldn’t be Barret.

6. Date Night At The Golden Saucer

One of the more fun parts of FF7 was the Golden Saucer sequence. Before the game gets into a heavy dramatic moment, you have a chance to chill with your party and enjoy some light-hearted fun. The highlight of this sequence is when Cloud goes on a date with one of the ladies in your party. Or ummmmm Barret.

During this sequence there is a rather fun play you can participate in. The play is cheesy at best, and your decisions can make it downright bizarre. It’s the kind of silliness that was pretty commonplace in the early Final Fantasy games, but died once the super deformed style was ditched for realism.

5.  Cloud Pretends to Be A Prostitute 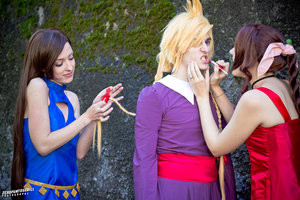 After Cloud is nearly killed in a battle, instead of looking for him, Tifa decides to investigate a pimp with connections to Shinra. Thanks for your concern. To find and rescue Tifa, Cloud has to pose as a prostitute. If you play your cards right, Cloud will have the opportunity to spend the night with the Don.  And if it weren’t for Tifa and Aeris’ untimely intervention, Cloud and the Don could have had some sexy time.

Caitlyn Jenner has opened up some doors, but I don’t know if we’re ready for an HD crossdressing protagonist. 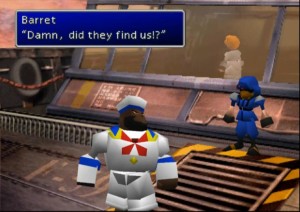 Apparently, your party decides that the best way to travel between continents is to hop aboard your enemies’ ship. This plan would be questionable under the best circumstances, but when one of your party members is practically the only black guy in the world and has a gun arm, you’re kind of going to get noticed. Your chances of stealth are even more limited when another member of your party is a god damn dog.
Seeing Red 13 wobble around the deck of Shinra’s ship is a fun sight gag, but it might break the suspension of disbelief in a modern remake. It shows that not only is your party composed of a bunch of morons, but your opponents are even dumber for not immediately seeing through your BS. It’s like watching Homer Simpson and Peter Griffin having a battle of wits. 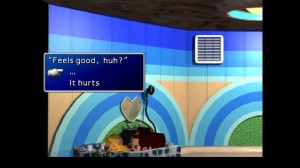 So ummmmm… wow. There is a scene in the Honey Bee Mansion, where Cloud finds himself in a room with a room full of men in speedos. If you don’t choose to leave, the men descend upon cloud, and drag him into a bathtub. They make some rather lewd remarks, telling Cloud to “count to ten” when he says he feels uncomfortable, asking him if it feels good, asking him how old he is, and finally asking Cloud to join the “young buddies” club, telling him about a trip they have planned to a cabin, and telling Cloud that “Daddy’s Lonely”.

Some people interpret this scene differently, but it seems to me Cloud was gang raped by a bunch of middle aged men, or at least molested. Either way ummmmmm… eww.

2.  Cloud Being Accused of Pedophilia 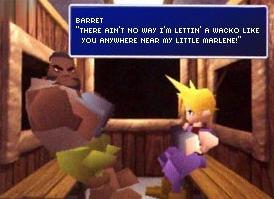 Most players in Final Fantasy 7 will wind up going on a date with Aeris or Tifa. If you play your cards right, Cloud can instead wind up on a lovely stroll with Barett. In the process they make a lot of jokes about the two because lol homosexuality. Either they tone down the humor and make this an actual date, potentially offending homophobic fans, or they keep it as is and mock homosexuality in general.

But, that’s not the real problem. The real problem is that while on a Ferris wheel, Barett accuses Cloud of being romantically interested in his daughter Marlene. Marlene is, for those of you keeping track, four years old. So, Barrett is accusing Cloud of being a pedophile. With voice acting, this is going to be really freaking weird. Dude… I just gave her the flower to be nice.. 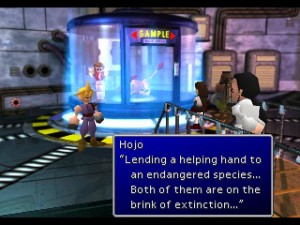 When Aeries and Red XIII are both locked up in Shinra’s science lab, resident mad scientist Hojo decided to try and breed the two rare specimens to make some kind of Cetra doggie thing. Red XIII pretended to go along with it to create a distraction.

First of all, that’s not how genetics work. Hojo, do you even science? It seems his scientific knowledge came from watching the “An Elephant Makes Love To A Pig” episode of South Park. And this is the guy in charge of making you a Jenova powered army. Sheesh.

More to the point, having one playable character threaten to rape another, even if he didn’t, is something that really pushes the boundaries of that T rating. This is even more wrong when bestiality comes into the mix. When you render the whole thing in HD, things just get weird. Just imagine Aeris cowering in horror, with Nanaki foaming at the mouth, as he jumps up and… you know, I’m gonna stop right there.

To sum it up, there are a lot of challenges in adapting a game made in a super deformed style to a modern HD experience. Art style is more than just cosmetic. It effects the tone of the whole story. It will be interesting to see how Square Enix manages to keep the spirit of the originals while not drifting into creepy territory.

Feel free to share any other weird Final Fantasy 7 moments by contacting me @GotGameJustin. If you enjoyed this (or even if you didn’t) I’d totally appreciate a follow.