Other then Fury and Fury X the AMD Radeon R9 300 series are considered to be a re-branding of the old R9 200 series. While that is true for the most part AMD has made some tweaks to make these new video cards. Out of the many video cards in this series I will take a look at the R9 390, specifically the XFX Radeon R9 390. 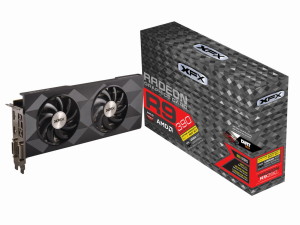 As stated before the R9 390 is a re branding of the R9 290 but with some tweaks including faster gpu speeds, faster vram, and double the vram from 4 gigs to 8 gigs. Granted most PC game don’t even come close to using 4 gigs of vram at this time but should be useful if you enjoy modding your PC games or do productivity software like 3d rendering.

The R9 390 is also capable if using AMD’S virtual super resolution (or VSR for short) which can take a 4K image and downscale it down to 1080P. Its a neat feature for both AMD and Nvidia (they downscaler is called dynamic Super Resolution or DSR) to have as they are built into the drivers themselves. Now there’s no need for 3rd party solutions like GeDoSaTo for me.

Speaking of 4K yes the game plays well at that resolution. Not at 60 frames per seconds (for that get a Fury or a Geforce GTX 980 ti) But I was able to play Middle Earth: Shadow of Mordor at a smooth 30 fps at ultra setting. Older PC games like Sonic Generations and Borderlands 2 at 4k both ran at a smooth 60 fps at there highest settings. If you are playing any other PC games at 4k with the R9 390 play around with the settings until you get your desire fps.

Temperature wise it seems okay. The XFX Ghost 3.0 cooler on the card kept it at around 50 degrees Celsius at idle and 70 degrees Celsius at load. May seem hot but by my understanding gpu’s are more tolerance to high temperatures then a cpu is. The noise was decent, not quiet but not anywhere near loud enough to be annoying.

Before we go into the benchmarks (which is 3 games an no synthetic benchmarks, not made out of money after all) I do want to say a few quick thing about the card’s flaws. First off its a long, dual slot card; it fits fine in my NZXT H440 PC case but any other cases smaller then that may not be able to fit this card. Second is that you need a big power supply, at lease 750 watts to use one R9 390. But the biggest problem for me, and why this card is not in my PC, is that it kept crashing my main video editing software Power Director 13.

I’ve tried everything to fixed the problem: updated and down graded PD 13,installed a few different video drivers, even turned off hardware acceleration in the software itself. And nothing was working! But once I took out the R9 390 and put back in my old Radeon 7850 the video editor no longer crashed.

Knowing that it was an issue with the card I did the only reasonable thing to do… go back to Best Buy and exchange the R9 390 for a Geforce GTX 970! Sure I could have waited but I have no ideal when the issue with PD 13 would be solved. Besides at lease I now have something to compared to the R9 390 with.

The 3 games I used for bench-marking are Tomb Raider Batman Arkham Origins (would have used Arkham Knight but we all know how bade the PC version is) and Middle Earth Shadow of Mordor. U used the Catalyst 15.5 beta drivers on the R9 390 and the Forceware 353.30 on the GTX 970. Settings for each games are each video’s thumbnails. Below is my PC specs:

As you can see both cards are giving out good numbers for there price so you would not go wrong with any of these. But while the GTX 970 does have some advantages, like using less power and the use of Physx/ Gameworks, the R9 390 is clearing the winner in terms of raw power. The XFX Radeon R9 390 has an MSRP of $359.99 while the reference GTX 970 I have now normally go for $379.99 at Best Buy but is currently of sale for $329.99 at the time of this writing.

So is the XFX Radeon R9 390 worth picking up over the GTX 970? Well if the GTX 970 is still on sale then it would be hard to say a definite yes. But if its back to its normal price and if you have the power supply for it then yes the R9 390 is definitely worth considering. Just do not expect it to work with Power Director 13 anytime soon.