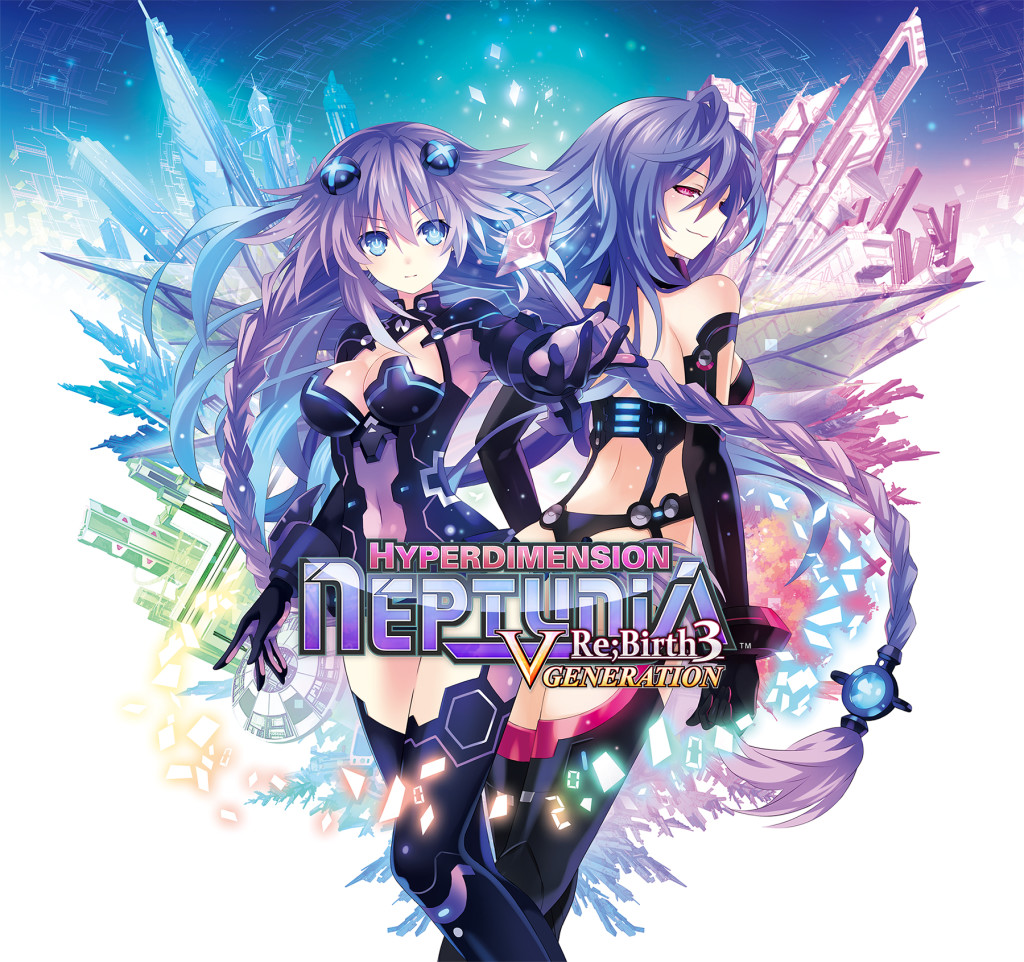 Idea Factory has been pumping out Hyperdimension Neptunia games fairly often, and it seems like there’s been one per month for a while now. Whether this is a good or bad thing varies on the player, as some could be getting sick of playing so many titles in the series in such a short time. This reviewer, however, is glad for the chance to experience the full series, having missed out on the original releases. And this brings us to Hyperdimension Neptunia Re;Birth 3: V Generation.

V Generation’s story takes place three years after the events seen in Re;Birth 2. Following Re;Birth 2’s True Ending, Gamindustri is enjoying an era of peace, and Neptune has, once again, become quite lazy. This causes the oracle of Planeptune to get frustrated and force her out to do quests.

On one quest that she has undertaken alone, Neptune encounters an odd person. This person soon sends her to an alternate dimension,  causing her to fall from quite a height before eventually crashing on her head. She eventually discovers that this is a different dimension, and the year is 1989. 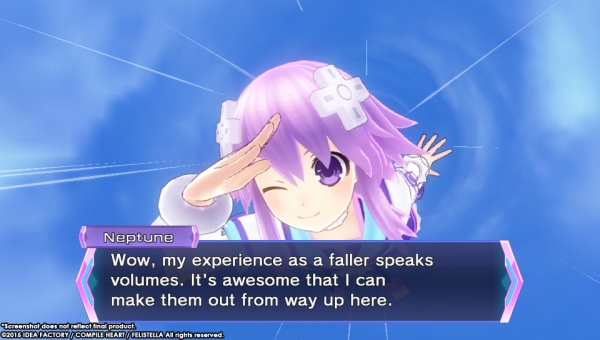 Hope I never fall from that sort of height!

In this dimension, the country of Planeptune is only recently being founded. Neptune will run into variations of her friends, as well as some newcomers, such as the CPU of the young Planetpune, a woman known as Plutia. 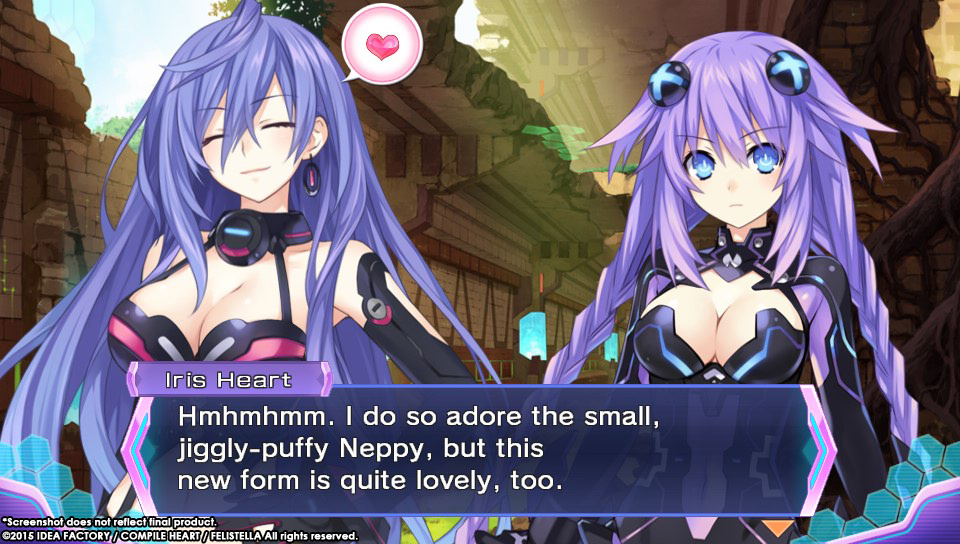 Plutia can be somewhat…. creepy when she transforms.

She is informed that the way to return home lies in increasing shares for Planeptune, and in the process of doing so, she witnesses a war brewing between the CPUs of this dimension as well as a group of villains known as the Seven Sages.

Overall the story has the same lighthearted feeling that you would expect from the Hyperdimension Neptunia series, as well as references by the boatload. Some of the references even include some newer things, such as Sony’s Oculus Rift, and even the new story paths that Re;Birth 2 presented.

Hyperdimension Neptunia Re;Birth 3: V Generation’s gameplay utilizes the same engine as the previous Re;Birth games did. As a result, as with the first two titles, you’ll be spending your time working on quests, travelling through dungeons, taking on enemies, utilizing Plans to obtain new items via the shop (or even change up dungeons), and advancing through the game’s story events to unlock new content. 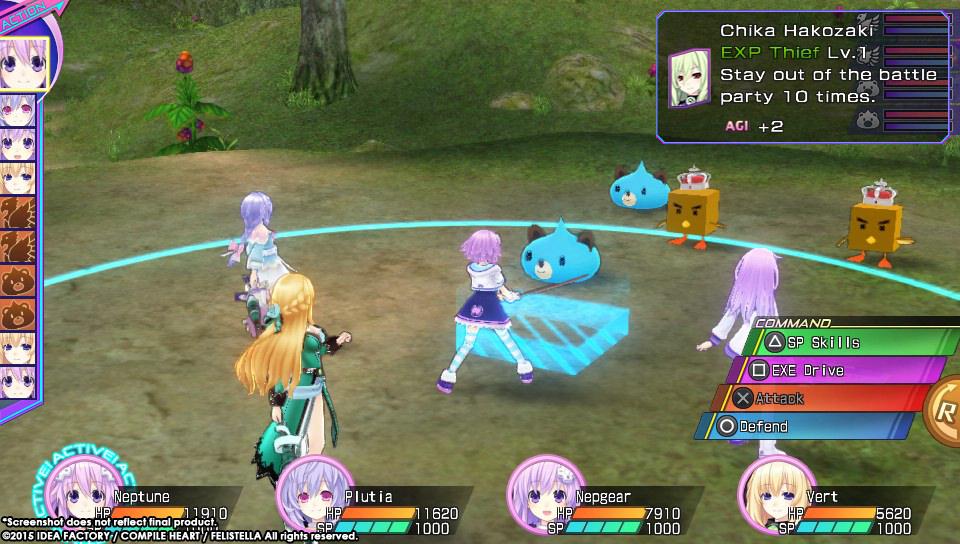 Since this is the same engine, the bulk of the game plays like the previous titles in the series. Come a character’s turn, that character can move a set distance and unleash skills (which require SP) or a variety of attacks. All of these attacks have their own benefits; Your guard breaking attack may do less damage to the enemy’s health bar, for example, but it quickly depletes the enemy’s guard bar. This allows you to achieve “Guard Break” on the enemy more quickly, which in turn allows you to dish out more damage with your assaults.

Perhaps the largest notable difference in battle involves your SP. Unlike previous games, it won’t regenerate when you decide to leave the dungeon you’re exploring. This makes it so that there are only two ways to regenerate SP: Utilize items or assault enemies with physical attacks. The lack of SP regeneration works to make boss fights incorporate a bit more strategy, as you can’t blow all of your SP in normal fights and then decide, “Hey, I’ll step out of the dungeon to regain all my SP and then come back and head directly there.” 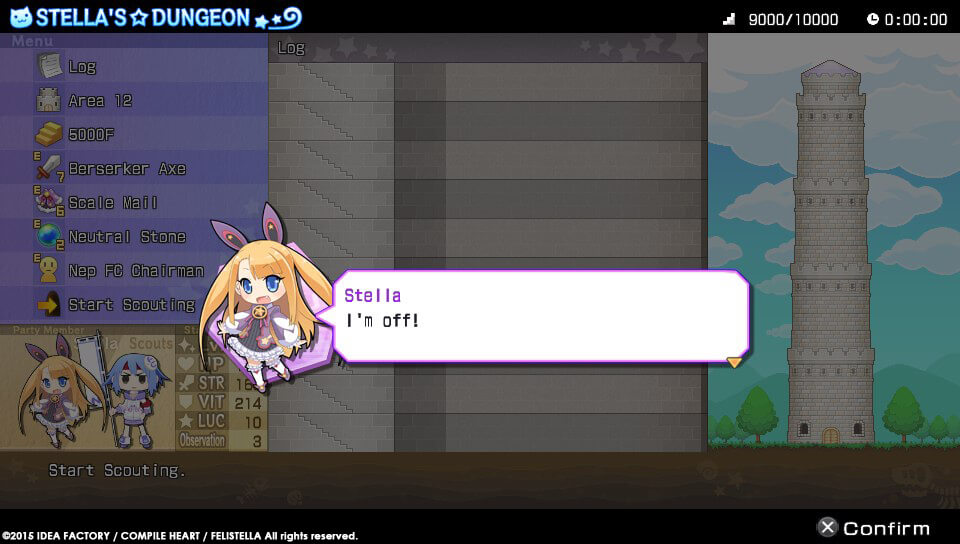 Stella’s dungeon is useful for gathering materials, plans, and even gaining access to the game’s True Ending.

Stella’s Dungeon is another aspect of the game that has been enhanced. Now you can send her out from the main menu (once you unlock that feature, of course), and she can be accompanies by various NPCs. If she fails in her quest, she’ll lose all of her equipment, as in previous titles, but her success will mean that you’ll be able to get new materials, plans, and even new NPCs to help her out.  Stella’s Dungeon is also crucial in order to achieve Re;Birth 3’s True Ending.

Hyperdimension Neptunia Re;Birth 3 places a large focus on story-based quests, as you’ll need to complete these in order to unlock new story events. These story events are a crucial part of the game’s progression as well, both for the more obvious reason as well as the reason that, if you miss out on some of the optional events, you will be unable to achieve either the Good or True Ending paths.

Finally, in terms of difficulty, Re;Birth 3 feels like a notch above Re;Birth 2. There are several boss fights throughout the game that will test you and require you to grind a bit more before you can advance, as well as demonstrate why, exactly, you should always have the best available equipment.

Hyperdimension Neptunia Re;Birth 3: V Generation is a fun little RPG that should please fans of the series. While it does have its faults -such as the voice-work at times (there are times when the voice actor will stop speaking, even when there is more text in the box. This can, as you can imagine, create a somewhat awkward situation where you expect to hear more, but are instead greeted by silence)-, the strengths -such as the humor, which has always been a strong point in the series, at least in this reviewer’s opinion- mostly make up for said faults.

All told Hyperdimension Neptunia Re;Birth 3: V Generation is a decent ride that RPG fans should enjoy.