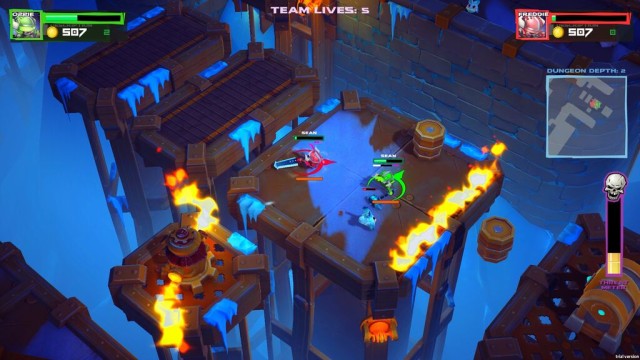 In what feels like a combination of Castle Crashers and the classic Gauntlet, developer React Games brings us Super Dungeon Bros. Giving an isometric view and procedurally generating dungeons, the game encourages on or offline co-op with up to four players. The game stars four protagonists (brotagonists?) that are all named after iconic rock and roll stars: Axl, Freddie, Lars, and Ozzie. Each has their own personality and this plays a part not only in the single player campaign, but also using the in-game banter system.

While selecting a character, players are also given the option of weapons, the E3 demo giving four different weapon types with two weapons each. Players will be able to choose from swords, crossbows, hammers, wands, and more when the game releases. Preferring a ranged weapon, the choice of a crossbow seemed to be the obvious selection as the four bros were plunged into Cryptheim. Crossbows work on an ammo system and depending on the weapon chosen, it could determine a lot of ammo in to use with long reload times, or even less ammo but with a fast reload. Players can use the right analog stick to aim while the left analog stick moves them, and the trigger can be used as an alternate shooting option. The more melee based weapons will work very much like one would expect, using light and heavy attack buttons to defeat foes. 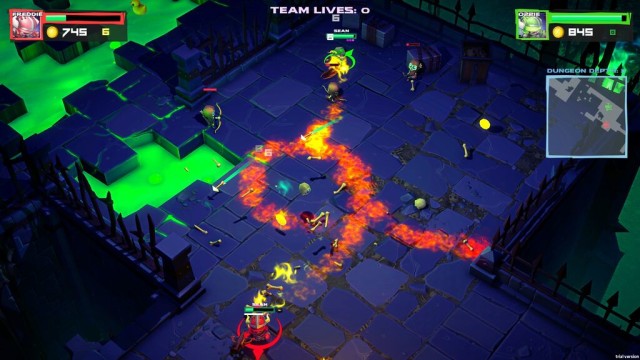 Maneuvering through the trap filled dungeon gives players a lot to look out for. Loot and enemies are all over the crypt as going after that one big score could activate enemy swarms. Even though the traps are mostly there to hinder the players, that doesn’t mean they can’t all be used to their advantage. Spikes spring up from the floors and enemies that walk over them will also get impaled. Spinning blade traps can be activated with a switch, as one player can hold down the switch and the other three ride the blade, drawing enemies towards it, an example of just one of many teamwork related actions.

Puzzles work very similarly, usually requiring teamwork where one player may have to “Bro Throw” another across a gap, allowing them to hit a switch for the others to cross. Sometimes there will be multiple switches that need to be pressed at the same time, requiring all the brothers to work together to progress. Teamwork is also used in various team based attacks, the demo notably showing off the “Bro Nado”, a spinning totem pole of death that gets stronger as each player joins in. 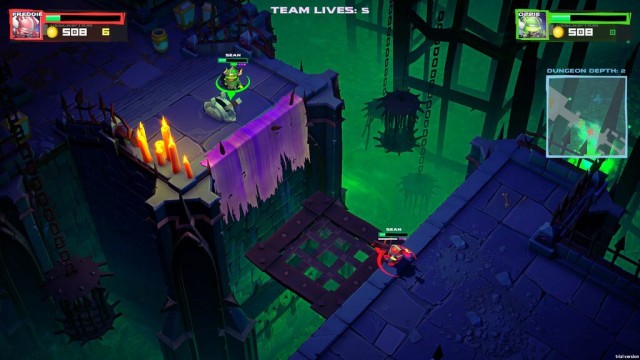 Due to the sounds on the E3 show floor, the music wasn’t really able to be heard. Considering the very rock and roll themes, one could imagine the kind of music a game like this would have. It’s a bit unfortunate but having heard the music from the trailer, one could have high hopes for some awesome rock music. The game apparently has a focus of finding legendary rock stars, so it would be nice to see just how consistent that theme holds with the title.

Making it to the boss of the dungeon, it ended up being another call for teamwork. The boss would attack with giant wrecking balls, being the primary target for phase one of the fight. When the wrecking balls are destroyed, the new target becomes the head, which is just out of reach. Luckily, a platform rises up, allowing for players to throw each other onto it and attack the boss up close and personal. He will summon enemies to try and distract the players, but with proper teamwork, he went down. After the defeat, a giant loot chest appears and allows for players to collect their bounty, which is luckily both shared and independent, so everyone has the same amount of currency but nobody steps on anyone’s toes. 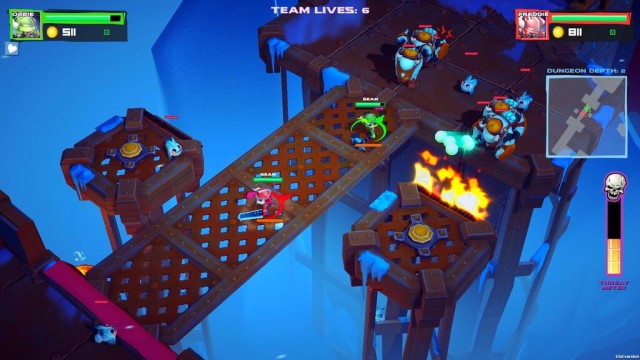 Once the level is completed, players are then allowed to use their currency to make upgrades, craft new weapons, and power up their bro as they see fit. These changes are not permanent, but will stick with the players as long as they continue to play, so to make your bro as powerful as possible, expect to do a lot of dungeon crawling. React Games says that there will be over 32,000,000 dungeon combinations, so at least the game will offer different experiences every time. There will also be daily and weekly dungeons that players will have the opportunity to play, allowing players to take on special dungeons with epic rewards.

Super Dungeon Bros. will release winter this year on PlayStation 4, Xbox One, Windows 10 devices, PC, and Mac. The game will also support cross platform play, the Xbox One being able to play with Windows 10 players, and PlayStation 4 being able to play with PC and Mac players. If you’re looking for a new couch co-op title, keep Super Dungeon Bros. on your radar, as it’s a blast to play, and we at GotGame hope to see more of it soon.