Indie developer Studio MDHR has come up with a nifty little game in the form of Cuphead. It may not be releasing till next year, but from what was seen here at E3, it should be one of the titles people should keep in mind. Cuphead may look like a 1930’s era animated cartoon, a style it pulls off incredibly well, but it is definitely not a game that should be taken lightly. Playing it either single player or two player cooperatively, the game is a lot of fun, and pretty addictive, but can also be incredibly challenging. 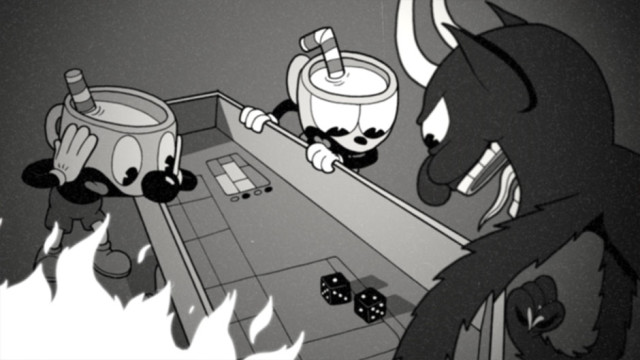 Cuphead has a nice mixture of gameplay, combining platforming and sidescrolling elements with the run and gun genre. Think Contra but with little men with cups for heads, shooting lasers out of their fingers. Now the game doesn’t seem to have any actual levels as of yet, as it is pretty much just one boss battle after another, and after having fought several of these cleverly animated bosses, one could say players will be in for a treat. There is a hub world for players to navigate, walking from one point to another, entering each new boss level to do battle. Cuphead and Mugman, the primary protagonists, lose a game against the devil and are now defeating these boss enemies in his service.

The first boss faced in the demo was a scrolling shooter type level, where the boss was a giant bird with a bird house for armor. Having full control of a biplane, Cuphead or Mugman can move around to avoid giant eggs being blasted towards them. Once the egg hits the left side of the screen, it explodes and sends egg shells towards the right. Flying yellow birds with nails strapped to them will move in a straight line and can be destroyed if needed, so as not to have to worry about another obstacle. This boss also flaps its wings quickly and sends a flurry of feathers towards the players, so it is best to maintain a sense of awareness. Players can only be hit three times so they don’t want to take too many chances, as every bit of health counts.

After defeating the bird, the next boss that was faced was in a large vegetable patch, the boss itself being a giant potato-like creature. It essentially throws clods of dirt and earthworms in a straight line, meaning the key is just jumping at the right times. Once this boss is defeated, a giant carrot appears from the background and attacks with carrot missiles. Cuphead and Mugman can aim their shots using the left analog stick and aim up at the giantcarrot. Overall, not a hard boss but it poses at least a bit of a threat.

The default weapon is a straight laser that has maximum range, while the other weapon seems to be a spread shot with a short-range, allowing great damage for when the player is up close and personal. There also seems to be a large powerful shot, though how much more effective it can be is hard to tell, as bosses have no health bar. Knowing when to use the right weapon types is the key to victory, as aiming certain weapons may make it easier to defeat these very challenging foes. This made a fight against two Giant frogs a bit easier to handle, as the two will stand together at times and using the spread shot can attack both at the same time, as well as destroy fiery flies that the taller one spits out. This fight gets rather difficult as defeating their first form makes them turn into a giant slot machine, which shoots coins at you. Pulling the lever with a second jump makes the machine select a random obstacle in the form of horizontally spinning spike wheels. There were three variations in the playthrough, one with lasers that shoot up or down, another one with bouncing balls to jump under, and the last one with no real threat aside from the spikes on the side. This boss was perhaps the most difficult one that was defeated in the demo, but getting the knockout was pure satisfaction. 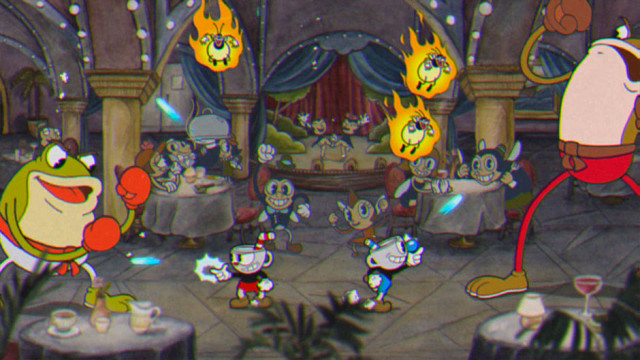 Another boss was a pirate captain, looking similar to Bluto from the old Popeye cartoons. He will stand on the top of his ship, meaning that he is rather difficult to hit unless shooting diagonally while running against his ship. During this, a barrel hanging from a crane will try to crush the player beneath it, so it is best to avoid that and go back to shooting. Every once in a while, the pirate will shoot small pink projectiles that are aimed towards the player, so yet another thing to avoid. If that weren’t enough, every now and then the boss will summon a giant shark to attack from behind, a submarine that throws live fish on the deck (fish that can be destroyed), or a giant squid that will shoot little balls of ink at the player. If hit by the ink, it will not hurt, but instead will cover the screen with a very well done, but temporary film-damage effect. Last but not least, the ship will also shoot cannonballs from its mouth…yes, the mouth.

Upon hitting the pirate boss enough times, he will transform the ship, which will start shooting giant lasers and balls that spin like an old cartoon baseball pitch. It gets pretty challenging, especially if the player forgets to duck during the laser part, as there is no other way to avoid it. The demo had a few bosses left, but running out of time, the final boss for this demo was a ghostly train, as this boss would have Cuphead and Mugman ride on a separate train car. The boss will shoot eyeballs at them as flying pumpkins will drop what looks like soap on the control for the player’s car. If the soap hits the control, it moves the cart up and gets the player closer to the boss. If the player gets too close, they’ll be under the hands of the ghost, a dangerous place to be as the ghost will basically be able to deal heavy damage here. 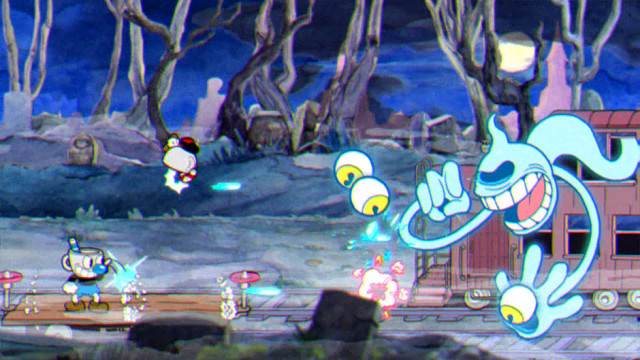 There is one other ability that players will have, as shooting at enemies long enough will fill a gauge under the health bar. When that gauge is full, the player will be able to use a super attack, causing the characters to deal a large amount of damage, which can also be used to strategically dodge a tricky situation as the move leaves players invincible during the animation. Again, it is rather difficult to see how effective it is, as the boss has no health bar to indicate damage. Despite the lack of enemy health bars, Cuphead is still a lot of fun and a very addicting experience. It’s just unfortunate that PC and Xbox One owners will have to wait till the game releases next year.