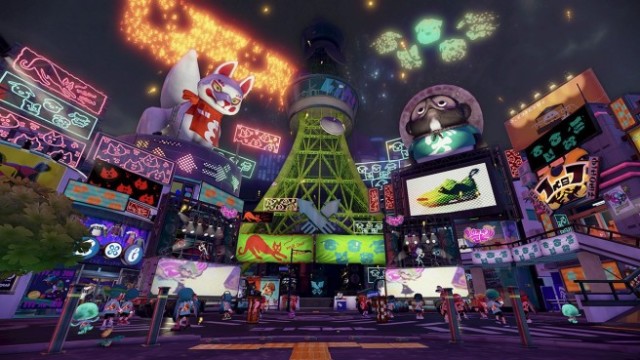 Every once in a while, Nintendo decides to experiment and create a new franchise that is outside of their comfort zone. Whether it be games like the garden-inspired Pikmin, or charming little puzzler Pushmo, Nintendo always does a good job with finding new ideas to add to their iconic franchises. In comes Splatoon, a team-based shooter that has players focusing on spreading colorful ink rather than getting kills. Using interesting gameplay mechanics, the game puts players in the role of an Inkling, a squid-like humanoid, and allows for some clever ideas where they will have to transform into squids for extra mobility, or human-form for better offense.

Splatoon is wonderfully packed with color, charm, and just the right amount of style, as the game offers a unique feel to the genre of shooters. Despite being a multiplayer focused game, it does have a well crafted single-player mode, which has over 20 levels with wonderful design, as many stages will offer new ideas and change the way players think. Some levels will focus on enemies that can  snipe from afar, while others may focus on filling sponge platforms with ink. Players will have the option of upgrading equipment with power eggs they collect through the stages, but the upgrades are hardly noticeable outside the extra grenade options. 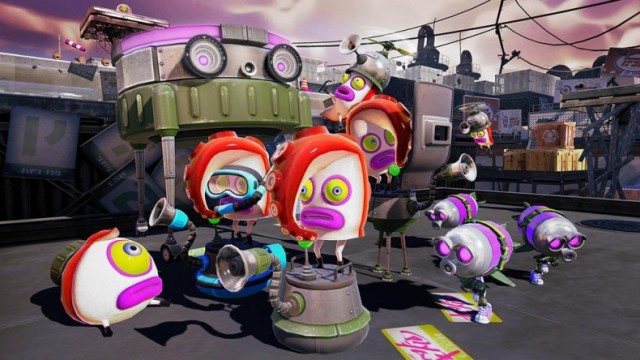 The story is rather simple, but still fun, as the evil Octarians have stolen the 100-year old Great Zapfish from Inkopolis, the city’s main power source, and it’s up to you to gather younger Zapfish by completing stages and stop the tentacled menace. Gathering Zapfish unlock boss battles, which while simple, still have fun ideas and can be compared to many of Nintendo’s other classic boss fights across their franchises. My personal favorite would be the Octomaw, a boss that requires doing a bit of dental work to defeat. The final boss itself, which I will not spoil, stands up to being one of the most challenging Nintendo bosses in recent years, as it requires all the skills acquired throughout the game.

Completing these levels and finding hidden scrolls help uncover lore of the game’s world, and defeating bosses unlock blueprints for various weapons which can be used in multiplayer. Besides finding blueprints, the main way to unlock gear is to level up through Turf Wars, the favorite sport of Inklings. Turf Wars essentially pits two teams of four against each other, with three minutes to cover the map with their color of ink before the time is up. It’s a fun game mode that is both addicting and challenging, not to mention incredibly rewarding when winning by just a tiny bit of ink on the ground. Players choose between a handful of weapon types, each with their own strengths and weaknesses, and each requiring different strategies for covering the map with ink. The splat roller ended up being a personal favorite as utilizing it gives a quick and effective means of covering the map, and the incredible satisfying feeling of rolling over an enemy and “splatting” them. It can also be said that this is easily one of the most stable online games Nintendo has ever made, as matches play fairly smoothly with very rare spurts of lag. 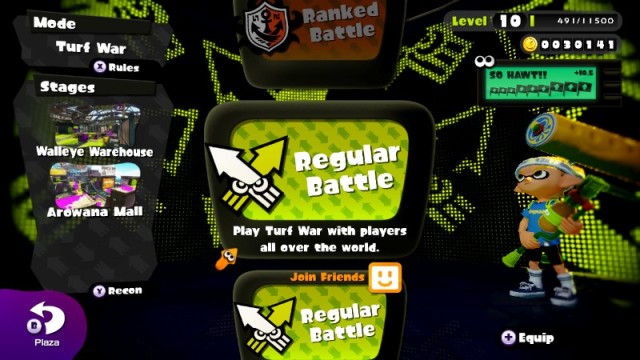 After playing a few matches of Turf Wars and leveling up, the player will unlock the option of shopping for new gear, all with unique abilities equipped like improved ink conservation or faster running speed. Eventually the player will have access to some gear with extra abilities that will randomly generate as the gear levels up. As of this writing, Nintendo has released ranked mode as well, which includes the other game type, Splat Zones. Considering that players have to reach level 10 to unlock the ability to play ranked mode, and it released four days after launch, it will be included in this review as part of the package. Since the first DLC map, Port Mackerel was included in the update, it will also be counted as one of the multiplayer maps for content. Splat Zones is comparable to more traditional game modes in shooters as it gives players an area or two to control, then tasking them to defend it until their timer runs down to zero.

Ranked mode offers a lot more experience from wins, especially for getting a knockout against the other team. Starting at a C- rank, the player gains or loses points to move up the ranks, the higher the rank, the less they gain. The game currently has six multiplayer maps, with more on the way as the game will have free content all throughout the summer. Each map feels significantly different and very well balanced, and provides different strategies depending on the game mode. Blackbelly Skatepark for example offers a unique experience for Splat Zones, as it has two areas to control, with a high platform between them to maintain a key observation point. Playing this map in the Turf Wars mode however makes players focus on covering all the halfpipes and small nooks and crannies with their ink. The maps go on rotation every few hours and gives two maps per mode, per rotation, as they will be randomly selected each round. 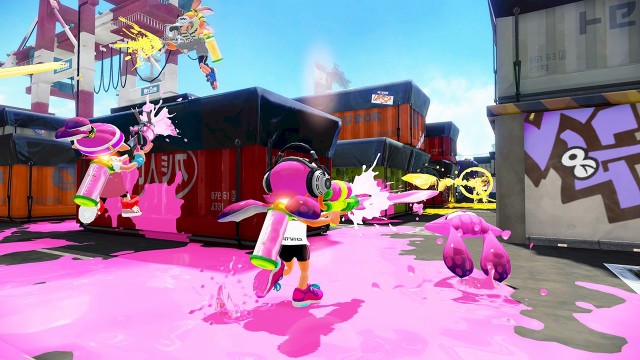 Going to the overall presentation of the game, the music is fun and unique, all while fitting the tone of the title with it’s “squiddy” tunes. It would have been nice for the shops to have different songs between them, even if it were just a variation of the same song, as it becomes a song that players will hear very often and gets a bit tiring. The visuals are not the best the Wii U has to offer, but the art style works in Splatoon’s favor, giving it a different but captivating look. The game could use some anti-aliasing, as there are jaggies, but they are hardly noticeable when the focus is on shooting ink everywhere. The game feels pretty polished throughout the experience, though it does have a few flaws here and there, like the inability to leave a multiplayer lobby, and some clipping from time to time.

The game does have a local multiplayer mode with the Battle Dojo, though it could have been fleshed out a bit more to give options like offline turf wars, as the game does have bot-like enemies in the single-player, suggesting that it wouldn’t be too difficult to do. Players will have to make due with competing to pop balloons on the selection of multiplayer maps, which unfortunately this mode cannot be played online, which would be a nice option to have given that other shooters allow for more options. Luckily, more options will arrive to the game later in August, but as of now, players will have to settle with the multiplayer the way it is currently. 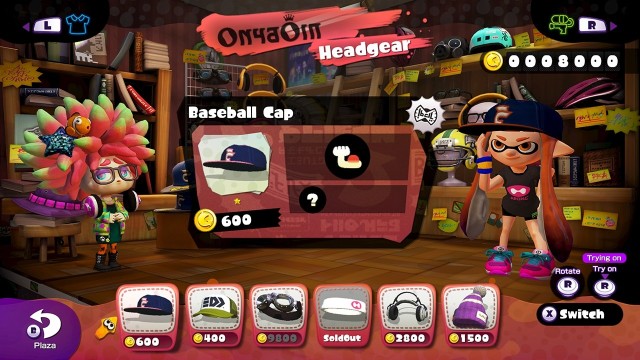 The game does support Amiibo, as using the highly collectible characters unlock 20 missions that basically take place in the singleplayer levels, the main difference is that they utilize different weapons and abilities. Inkling Boy uses the Splat Roller, Inkling Girl uses the Splat Charger, and the Squid focuses on the Kraken powerup. Using different weapons does increase the challenge, and completing three missions in a row will unlock a boss stage, where a special piece of gear or weapon blueprint will become the reward. It’s worth noting that the weapons gained from the Amiibo are simply reskins, so they don’t have any advantages online. The special gear that can be earned however works just like the rest, randomly generating abilities…not to mention they look pretty awesome.

It is worth mentioning that the Splatoon community is pretty active. Not only is it pretty easy to get into an online match, but the Miiverse community is full of wonderful artwork, words of praise, but most of all…it’s full of memes. Fans have taken to the Miiverse to draw tons and tons of meme art, giving a fun squid twist to them. Inklings representing players online will walk around the Inkopolis plaza and display their Miiverse posts above their heads, and Miiverse art will even be placed all over various multiplayer maps as graffiti, making great use of the Miiverse feature. Using Miiverse in this way really makes the world come to life and gives it a sense of style that matches the game completely. Let’s hope that Splatoon continues to have an active community, giving Nintendo plenty of motivation to support the title long after the launch.