Preview | Disney Infinity 3.0 Inside Out Playset

Disney Infinty 3.0 may have a lot of focus on Star Wars this year, but aside from Marvel and Star Wars properties, Disney Interactive is bringing back the Disney playsets with Inside Out, based on the new (and fantastic) Disney/Pixar film that releases later this month. The story of the playset is actually a sequel to the film, so it will offer something new for fans, yet still have familiar elements. The little girl from the film, Riley, accidentally falls asleep while watching a scary movie, releasing swam monsters from her subconscious into her mind. It’s up to Joy, Anger, Fear, Sadness, and Disgust to get things back to normal. 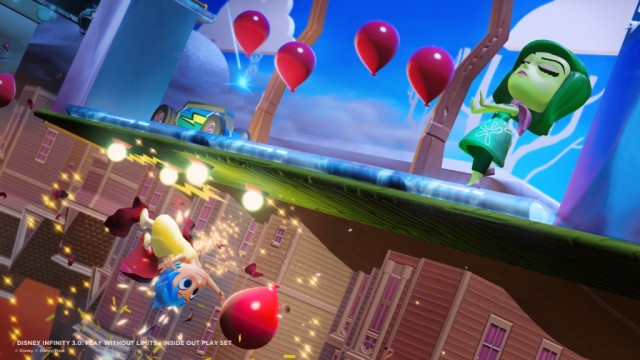 The setting takes a lot of elements from the film, like the suburbs of Minnesota to the Golden Gate Bridge from San Francisco. Players will see areas from the film like Long-term Memory, Dream Productions, and even Imagination Land, making it feel like a very authentic experience. Unlike previous playsets, Inside Out takes more of a platforming direction, switching between 3D and 2D gameplay, utilizing strengths of both orientations. The 2D sidescrolling uses unique gravity changing elements while the 3D platforming feels more like a Psychonauts styled game. Combat is fairly straight forward, and though it isn’t the focus, there will be enemies to battle throughout the 20+ levels. All characters will have the ability to throw memory orbs, a melee attack, and a ground slam to help them battle enemies along the way while they collect balloons and reach the goals.

Even though the characters have the same combat mechanics, they each have a unique ability that allows for different options throughout the game. Joy for example can hover after a jump, allowing for more precise landings. Anger has the ability to walk on lava, another clever element taken from the film, as there will be balloons and other collectibles along the molten surface. Sadness has the ability to walk on clouds without them dissolving beneath her, giving players more flexibility. Fear’s speed is the fastest among the characters and allows him to run across platforms that may fall quickly beneath the other characters. Disgust has the highest jump of all the characters, allowing for her to reach things that others might not be able to. 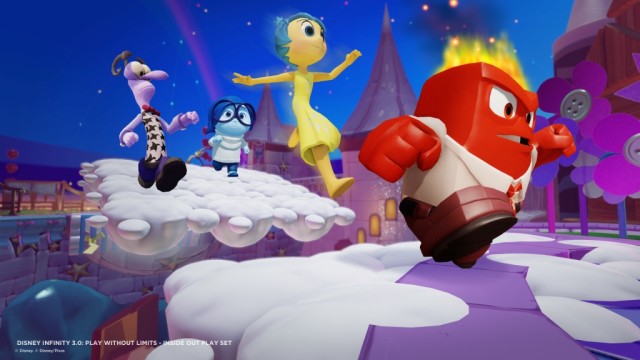 The whole playset is made with cooperative play in mind, as characters can use their unique abilities to work together. All characters can pick up their partner, so Anger could carry someone over lava, or Disgust can carry someone and jump high enough to grab that item that may have been just out of reach before. The levels are designed to be able to be played with only one player as well, but it would be much easier to get better scores with two players. The game now has leaderboards that post the fastest times, allowing for people to compete and give players bragging rights, so it is crucial to learn the best routes if you want to get the best time.

Unfortunately, the story content wasn’t displayed for the preview, but the overall presentation was fun and inviting. Using the “headquarters” from the movie as a hub, the game has players selected memory orbs to start each level. The visuals are colorful and vivid, and allows for a consistent experience across different platforms. Only two of the voice actors from the film reprise their roles for the game, Lewis Black as Anger, and Phyllis Smith as Sadness. Despite the others using sound-alikes, Disney does a good job of finding replacements that capture the energy of their characters, and even then, just getting two of the actors from the film is more than many other licensed games tend to get. 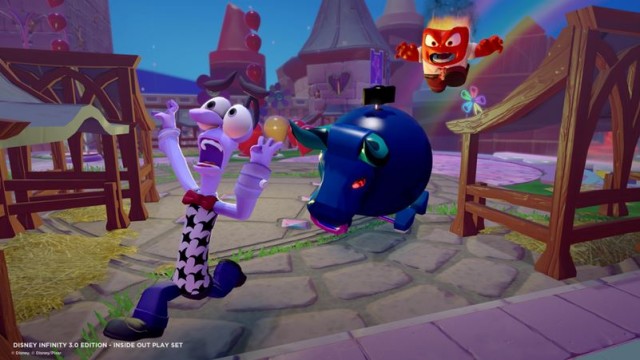 The Toy Box wasn’t accessible during the demo, nor were the other playsets, but the figures were all shown in beautiful display. They were all very fun looking and capture the spirit of the characters, especially the various characters of Inside Out. Each of the emotions perfectly display their distinct characteristics and look great in person, surely a wonderful toy for Disney fans of all ages. We’ll be seeing more of Disney Infinity 3.0 at E3 this year, and our own Steve Masters has a great GGTV interview with John Blackburn and John Vignocchi that you can view right now. Disney Infinity 3.0 is set for release this winter, and will release for Xbox One, Xbox 360, PlayStation 4, PlayStation 3, Wii U, PC, and mobile platforms.