Last week, Turtle Rock Studios teased a big announcement for a livestream today, and now that the time has finally passed, we now know the big reveal. Arena Mode is now available for the game, giving players the opportunity to put their skills to the test by taking the hunt away from Evolve, and making it all about the fight. 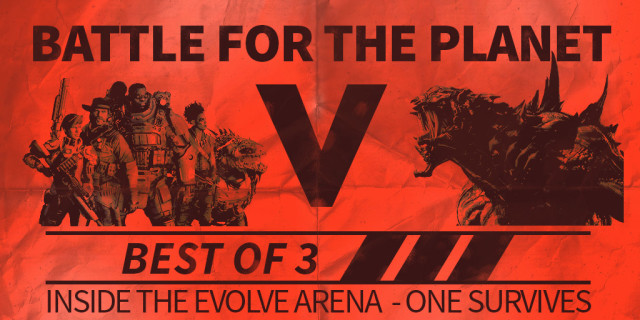 Using the same four versus one mechanic, Arena Mode uses one of five arenas on each of the 14 maps for a total of 70 arenas, and forces the Monster to fight rather than flee. Monsters start out at stage 2 and have the potential to evolve to stage 3, though due to the mobility factor of the arena, it may be rather difficult. Players will select a map and then the game will randomly choose three arenas on the map for a best-of-three series of matches.

If a hunter dies in battle, they are eliminated until the next round, as there will be no dropship to revive them. The Trapper dome also will never come down, so the Trapper class no longer has to worry about their class specific ability. The players cannot change their perks between each round like they can for Evacuation Mode, but the monster’s player can still change their ability selection. This will give Evolve a new way to experience the game and give a more instant satisfaction to the gameplay, and Turtle Rock Studios hopes that it will bring about a new competitive spirit to the game.