Recently the Hyperdimension Neptunia series decided to try its hand in a new genre, mainly hack-and-slash. Will the girls of Gamindustri fare well in the new arena, however, or will they be defeated and forced to stick to the more traditional types of RPGs?

As per standard Neptunia fare, we are taken to the parody-filled world of Gamindustri. The main characters of Hyperdimension Neptunia U: Action Unleashed are, of course, the four CPUs (Neptune, Noire, Blanc, and Vert), the four CPU Candidates (Nepgear, Ram, Rom, and Uni), and two journalists that are series newcomers. The two newcomers are known as Dengekiko and Famitsu, named after certain popular Japanese culture and gaming outlets.

These two journalists approach each group of girls with different story ideas. One wants to show off how awesome the CPUs are, while the other wants to show the powers of the CPU Candidates. They start off by offering a couple of quests themselves, which you’ll need to complete. Soon a bunch of other citizens start offering up quests, which are typically just reasons for you to go kill things.

The story is fairly standard fare, really, and you can even bypass part or all of the story with a simple button press. I actually messed up a couple of times and accidentally hit the button in question (square), but luckily, once you hit it a second time it stops speeding through the dialogue. You can also check previous dialogue with another button press if you make the same mistake that I did.

The gameplay is where Neptunia U shines. Each of your combatants will have access to both strong or weak attacks, which tend to function like the Dynasty Warriors series with simplistic combos triggering new abilities. In addition, while in the field, you can double-jump, dash, utilize stronger abilities (as long as you have enough on your mana guage), and even transform into the signature HDD mode, a super powerful version of the character. 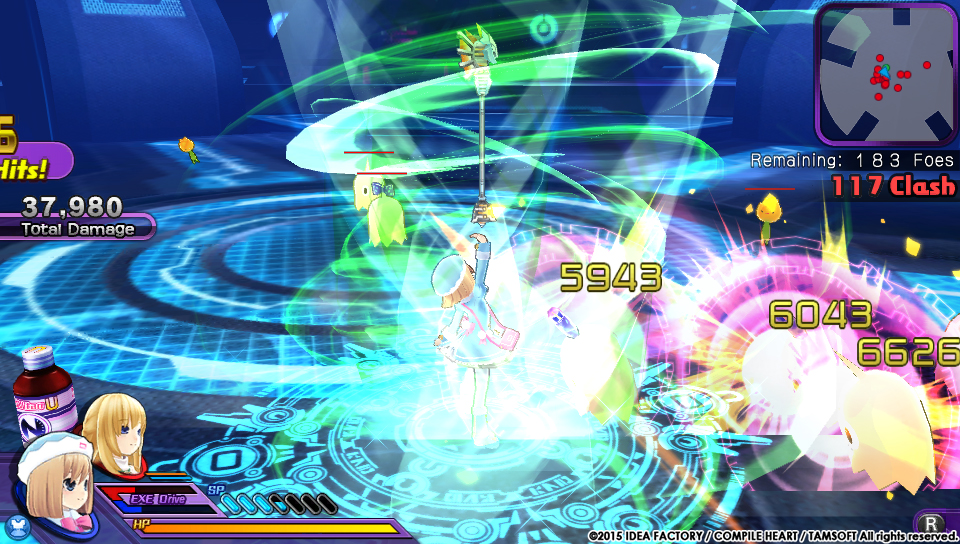 You can freely move the camera around as you dash around the varying arenas, and there are plenty of display settings that you can tweak if you feel like the UI is too cluttered. Several gaming fans will also be pleased to note that you can swap between the original Japanese or English voice acting as well.

Most of the missions, as stated before, are typically the same overall. “Kill x amount of enemies,” or “Kill this specific enemy” tend to be the two main ones, although there are special quests that leave it up to you to attempt to figure out the condition for victory.

Combat itself is actually surprisingly deep for a simple hack-and-slash title, though gamers who decide to go on the standard difficulty probably won’t need to utilize even half of the available tricks offered up by the system. During combat, you may see the girls become scantily clad, as there is a costume break mechanic implemented into the game. This mechanic makes it so that if you utilize too many strong attacks or get hit too often your clothes will tear. As you progress through the game, it’s possible to get clothing that will rip even easier, offering up even more fan service for gamers who enjoy that sort of thing, or even pre-ripped clothes. Gamers who mind that kind of thing may want to skip the title, though it should be noted that it’s also possible to get clothing that won’t rip no matter what as you progress. 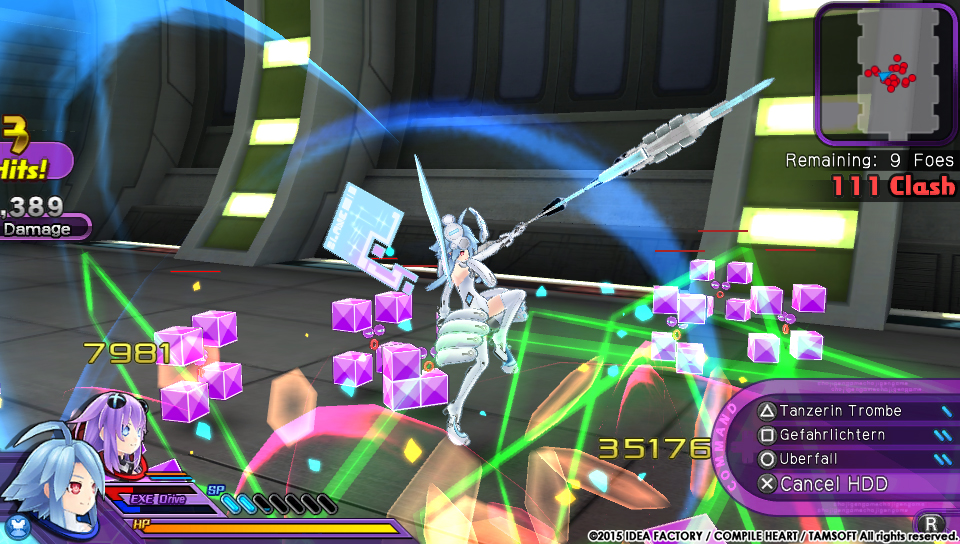 As you take down the enemies they’ll typically drop medals that you can pick up. These medals, unique to each enemy type, are utilized to gain various items, abilities, and upgrades. Once you collect a certain number, you can enter your setup screen in town and redeem them for what you’re interested in. It should be noted that you won’t lose medals when you redeem them, so there’s no point in hording for an item you want later, as I learned quickly.

The pacing could also be improved a bit, honestly. Enemies early on aren’t really a challenge, even on the hardest (initially available) difficulty. Though the models are fantastic and act as references to popular characters, such as the Dragon Quest slimes and the Pac-Man ghosts, they tend to go down in a hit or two, allowing you to clear them quite quickly without any real difficulty.

The flow of levels also feels much more confined, like the Senran Kagura games. Many levels are simple little arenas for you to take on the hordes of enemies in, and while others do have a fair number of gates that open when you achieve a certain goal (whether killing a set number of enemies or taking down certain ones), they tend to lead to another area filled with more opponents. Neptunia U is definitely less focused on exploration and more on constant fights, which could be good or bad, depending on your point of view. Personally I enjoyed trying out every character, experimenting with different styles of gameplay as I tried to destroy absolutely everything in sight.

Aside from the levels and quests, once you’ve managed to clear out the first few quests the game really opens up. You’ll be able to hang out with the cast of the game in order to unlock additional scenes, watch additional scenarios, mess around with your current loot, try new gear combinations, or even adjust your bonus abilities.

Neptunia U is definitely built around replay value, counting on players to repeat missions to obtain better scores, gear, and ultimately achieve the maximum level with every character available. Post-game content is also interesting, including, among other things, a new difficulty and even an arena mode in which you can take on the girls of Neptunia in tournaments featuring one-on-one battles.

Honestly, Hyperdimension Neptunia U: Action Unleashed is a fun action game, and a solid first attempt at bringing the Hyperdimension girls into the hack-and-slash genre. While it does have some flaws, they’re easily overlooked by the game’s deep combat and multitude of extras.