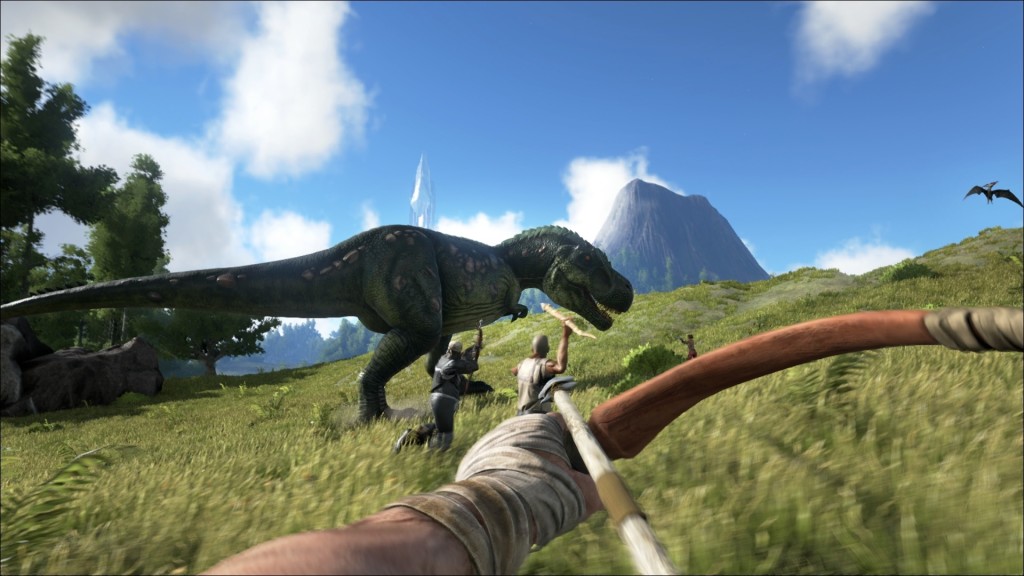 With survival sandbox games like DayZ, Don’t Starve, and State of Decay taking up plenty of time in gamers’ days, there’s interest in the market for a new take on the genre. Studio Wildcard thinks it has the solution to breathe some fresh air in to the space: take your open-world survival game, add nonlinear story and Unreal Engine 4, toss in some dinosaurs and a dash of RPG-style leveling and you have ARK: Survival Evolved, an upcoming game for PC, Mac, Linux, PS4, and Xbox One. Though the game has been in development under a year, by combining a team of experienced talent in the industry the game is almost ready for release, with the Steam Early Access version dropping on June 2nd.

I spoke with Jesse Rapczak, co-founder of Studio Wildcard and co-Creative Director on the ARK project to get an overview of the game and details about what he feels will set this game apart from its competition. Foremost, he said that the game was created with the idea that, though they love many of the popular survival games out there today, many of them feel like they’re just about surviving. “For ARK, we really wanted survival to be the means to the end, so what we’ve really tried to do is make it so that stories are unraveling through ARK and there are adventures to go on,” Jesse said. “It’s not so much like linear gameplay like you might think of from a single-player game, but there’s artifacts all over the island; it’s a carefully constructed environment…it’s not fully procedural by any means. We felt like making a game that did that was kinda losing out on some of the stories that we could tell through the environment…that’s really what sets ARK apart for us is that you’re in this living environment with the creatures, it has a history, and you landing there as a survivor and not really knowing what to do, kind of discovering what the island is about, why it’s there in the first place, and why you’re there is what we wanted to come across in the final gameplay.” 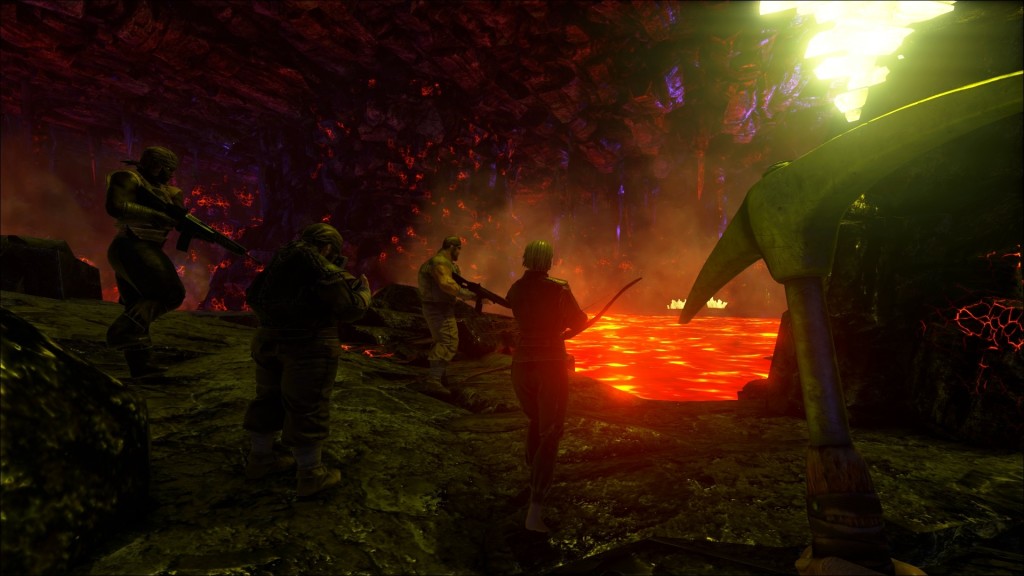 I’ll admit, I got a bit of a vibe from the TV show “Lost” during his description of ARK, but he laughed and said that their story might not quite make for as good a TV show based on the craziness they have planned. Still, their story gives them room to develop and grow through the game’s time in Early Access and on in to the final release. By the game’s launch, there will be dramatically different zones to explore: above ground regions, a large cave/tunnel area, and even underwater sections, each with its own purpose and backstory within the ARK world. “There really is no linearity to the story; for us, the backstory just exists. It’s almost more archaeological, like you might come across something in the deep jungle, ruins that haven’t been discovered before, and in those ruins you might find some explorer notes, or cave paintings that give you some history of the island.” Those items can reveal more about ARK’s history, give you tips and formulas to craft new items or solve problems, or even point you towards the endgame, a component many survival games seem to be missing. 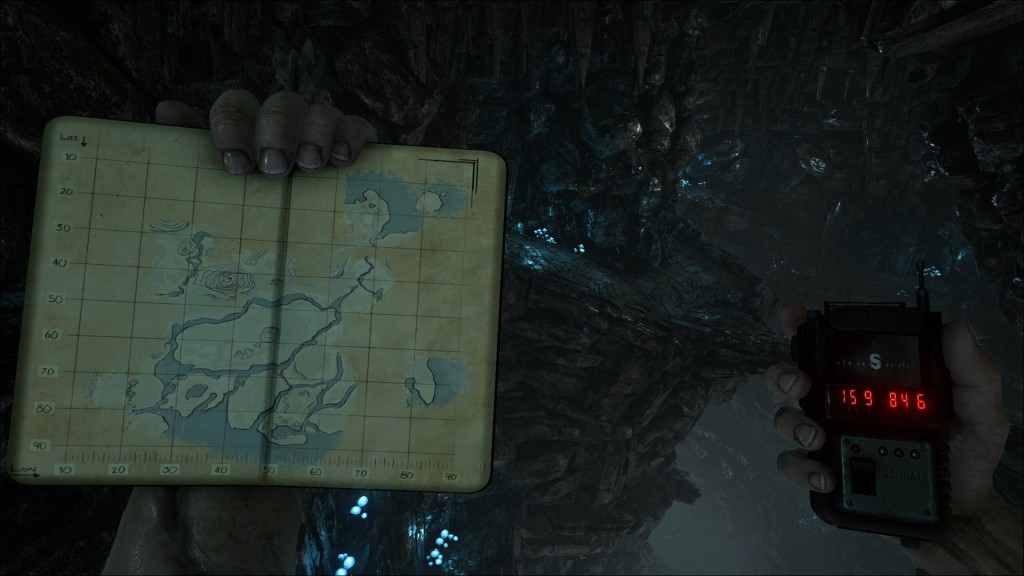 Rapczak says that there is a plan for an actual endgame component to ARK: Survival Evolved, a plan they’ll test within the Steam Early Access community. There’s a full year of time slated between ARK’s premiere on Early Access and its final release on Steam and consoles; he estimated that half of that Early Access time would be used to take on player feedback on the gameplay, story, endgame, and more. ARK will also be one of the first Unreal Engine 4 games to ship with its mod tools, allowing players to create their own experiences and worlds within the ARK universe. “We’re going to allow people to host their own servers because, while we think we have a pretty good idea what makes the fun endgame for ARK, we also want lots of input from the community about what’s the most fun way to play this game.” By allowing players to mod the gameplay, and even the endgame itself, Rapczak hopes that players will feel a reason for all the hours they pour into survival sandbox games.

Of course, one of ARK’s biggest draws is the presence of dinosaurs and other prehistoric creatures in the game world. Those creatures take their own actions in a natural state, but players can tame dinosaurs “Pokemon-style” to make them part of the game experience, using them as vehicles, pets, guards for bases, and more. Taming dinosaurs involves knocking them unconscious, then feeding them and taking care of them until they’ve come over to your cause. This process can take anywhere from a few minutes to multiple hours, encouraging you to team up with other people to help in the taming process. Groups of players, called “tribes” in ARK, can work together to tackle the skill tree and create a large pool of skills for the tribe to draw from. They can also work together to build bases on the island and create defenses to keep the base safe while players are offline, since the world is persistent. 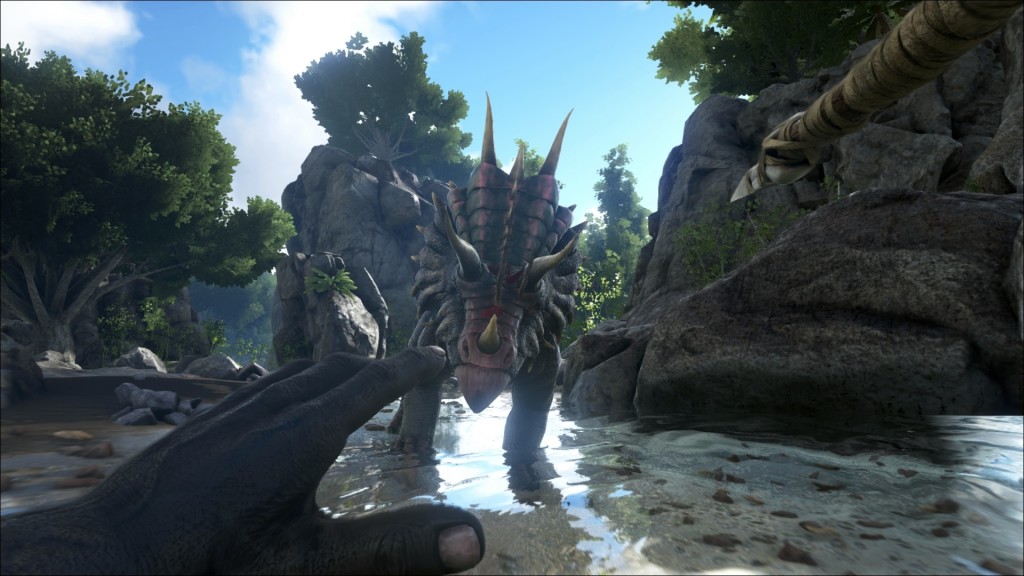 Studio Wildcard started work on ARK: Survival Evolved in November of 2014; if that sounds like a short timeline to do for a game of this size, know that I’m thinking the same thing. I asked Jesse if he was concerned about releasing a game of this scope on a timeline that quick, especially with the reputation of Steam Early Access games releasing as broken or incomplete, but he said that the team that he’s put together at Studio Wildcard, in addition to the amount of the game that’s already finished, should let players feel confident in purchasing and playing the title even before the full release. “You might think that the game’s not very complete, but the opposite is true. What we’re really focusing on in Early Access is balancing; we want to make sure that the progression through the game feels good…how many hours, how many weeks does it take to tame a T-Rex versus when you start the game? We really want feedback from the players on stuff like that. I feel like we’re using Early Access the right way; we’re not really beta testing our game, we’re not trying to release our game earlier than when it’s ready. I would almost be happy, honestly, aside from some bugs, to release the game right now and call it done. But we’re really not at that stage; we want to make the game even better, and we want to spend a significant amount of the next year making the game really awesome for consoles.” Since developing dynamic content and updates can be harder for consoles, the Studio Wildcard team plans to work on using Early Access feedback to refine the final product for both Steam and consoles. 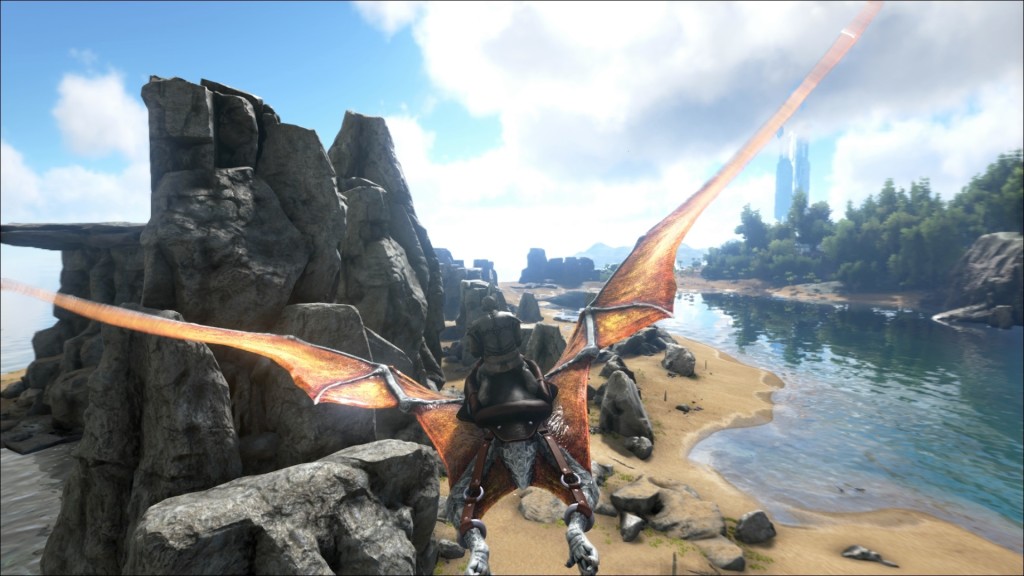 After this discussion, it sounds like there’ll be plenty to explore and discover when ARK: Survival Evolved releases on Steam Early Access on June 2nd. There are tons of huge ideas in ARK, ideas which could really ripple through the survival sandbox community if they’re effective in the game. When I asked Jesse what he was most excited about with ARK’s release, he said he couldn’t wait to see what types of things the community would create in ARK. “We’ve really tried to provide some initial fun stuff like a parachute, only for the reason that it’s just fun to jump off a flying dinosaur from the top of a mountain and parachute all around the map. Who knows what’s gonna happen.”