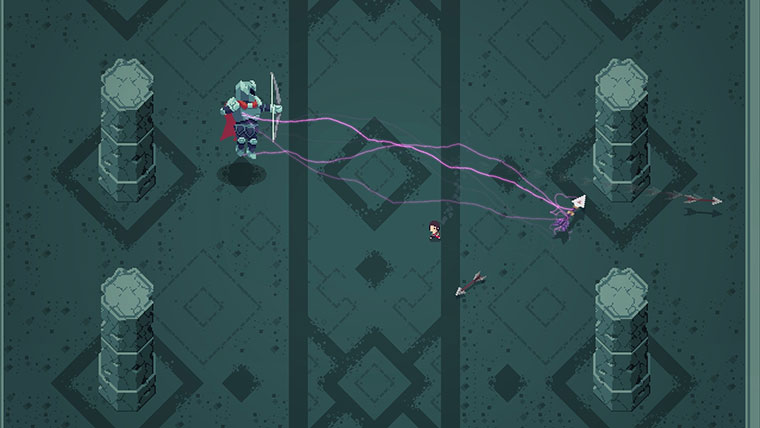 Titan Souls has no problem showing its difficulty off early on. 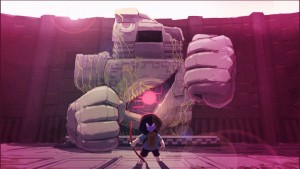 From the beginning, you face off with one gigantic titan after another, armed only with a lone arrow, a dash and a roll. Why you’re doing this is never clear. See, unlike Shadow of the Colossus, an easy but not completely accurate comparison for this game, you’re never told why you’re killing these titans early on. There’s no girl you’re trying to save or land you’re trying to protect. You just go into rooms and destroy these giant creatures, one at a time.

Like Shadow of the Colossus, though, the game feels more like a boss rush. Destroy a titan by shooting their red weak point, absorb their soul and move on to the next titan. In between titans, there’s a beautiful pixilated world to see and explore. However, outside of a few secrets and some hidden titans, there’s not much to see while you try to find the next titan to end.

This is where my Shadow of the Colossus comparisons end, however. Unlike that game, where you have a multi-level climb on a colossus to find its weak point, this seems more like a boss battle a game like Super Meat Boy would have. You’ll die again and again, trying to find the weak point in the boss and find the perfect way to hit it to kill it while avoiding constant waves of attacks. 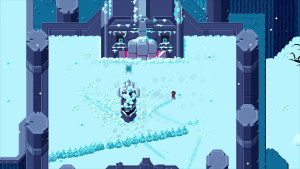 It’s not all about strategy though. Sometime, it really seems it’s about blind luck. I had a few battles where I took a titan down in seconds because of a lucky shot hitting the perfect location, whether it was a butt or heart or core of a plant. Sure, many required strategies of dodging a pattern of attacks before getting the perfect alignment of their weak point, but some left me scratching my head of how I killed the titan almost instantly.

Another layer of strategy to note is the ability to recall your arrow. After you fire your lone arrow off, you can just run over it to pick it up. You can also hold down your shoot button to recall the arrow back to you. Sure, this roots you in place and leaves you vulnerable, but sometimes it’s a great strategy to attack a boss from behind or launch a different style of attack while taking a quick break from dodging.

What I appreciated about most of the battles, when they weren’t randomly decided, was the thought put into the fights. To kill the titans, you have to hit their weak point, which are normally only exposed for a second or two before their next attack. This means most battles come down to a life or death shot to either come out the victor or die and try again. One boss in particular in the lava level came out to a stalemate with me multiple times. I would get the winning shot on it, but it’s spike-ball hand would be above my head, crashing down and killing me upon its death. 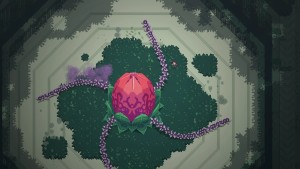 One thing you’ll notice as you go through is that you don’t have to kill every titan in the game. In fact, you may not even find them all. I killed 17 total before I ended the game, but skipped a few on the way due to pure frustration against some of the titans (I’m looking at you, previous titan hunter).

A small annoyance I ran into when compared to a game like Super Meat Boy is the restart. The game expects that you will die again and again on a titan. Instead of starting you immediately outside of the titan door to try again, though, you’re started at the checkpoint in a hub area, forced to run back to the door, load to enter it and start the fight again. A fight which may be over in seconds with your death, forcing you to load back to the checkpoint and run again. Other tough titles like this have an almost instant reload to try again, why not here?

Once you clear the game, you’ll unlock some new modes, such as Hard mode, Iron mode (only one life to take everything on) and No Rolls mode (which also means no running). All modes can be turned on or off, making for an even harder time, if that’s your thing.

While I already mentioned how much the graphics look, I also want to mention the sound. The music when you’re taking on the titans are great. It at least makes the constant dying as you’re facing the titans somewhat worthwhile. A special call-out to the music facing the spike-ball crusher in the lava world. Really enjoyed that rock track.

Final Thoughts:
Overall, Titan Souls will cause frustration, it will cause moments where you want to probably throw your controller, but it will also give a lot of fun and accomplishment when you finally take a boss down. If you want a few hour diversion and an interesting boss-rush game, Titan Souls is right up your alley.