As a fan of Mario Party 9, the tenth main installment of this popular party franchise leaves a bit to be desired, or at least a bit more polish overall.  Developed by Nd Cube, the same developers of the Wii Party franchise as well as the two most recent Mario Party games (Mario Party 9 and Mario Party: Island Tour), the game gives three different modes that have their own quirks and features. The main draws to this entry in the series come from the new Bowser Party mode, as well as the Amiibo Party mode. On top of these three main modes, there are various other special games like a simplistic Badminton game, and a fun little match three style puzzle game called Jewel Drop. 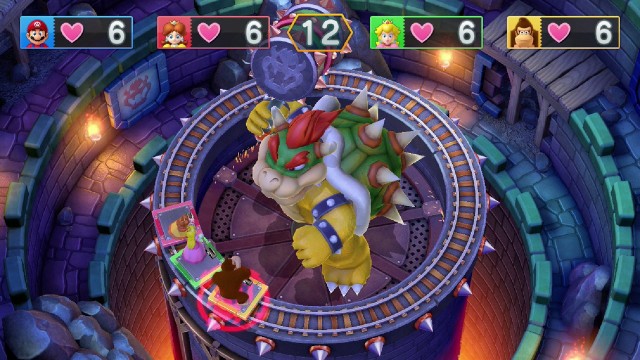 Starting with the strong point, the game shines brightest with Bowser Party mode. This is a five player game mode where up to four players fight on Team Mario using Wii Remotes, while Team Bowser is a one man army using the Wii U Gamepad. This is one of the most entertaining modes to bring to the series to date, adding a fresh mechanic to a tiring franchise. Team Mario will take turns to roll dice to get as far from a giant Bowser as possible, the end goal being to get to the Super Star at the end of the board. After each member of Team Mario has had their dice roll, Bowser will have his turn at rolling, having four dice to roll to try and catch up. If Bowser reaches Team Mario, then a Bowser mini-game will commence. These games are catered more towards Bowser, but it isn’t impossible for Team Mario to pull through. Each member of Team Mario will have a set amount of hearts, and losing them all will knock them out of the game until hearts are replenished through the game board. If each member of Team Mario loses all their hearts, then Bowser wins.

The Bowser Party mini games are fairly fun and use the Gamepad in various ways. “Bowser’s Bad Breath” has Team Mario trying to avoid fireballs being blasted towards them, while Bowser blows into the microphone to blast a fireball using the Gamepad’s gyroscope to aim. Another mini-game, “Bowser’s Fire Bar Fury”, will have Bowser tilting the Gamepad to move fire bars over the field where the other players are running around trying to avoid them.  It feels good to be bad and it brings an interestingly twisted smile to one’s face to see a congratulatory screen for Bowser for once. That isn’t to say Bowser will always win, as Team Mario has plenty of opportunities. They can gain hearts, movement boosts, and even special dice to try and make it more difficult for Bowser to defeat them. Special spaces that can earn these have the chance to be tampered with by Bowser however, as Bowser will always be able to see the rewards that players have access to by chance. When reaching the end of the map, Bowser can even hide the super star behind an enemy up to three times, assuming the players of Team Mario incorrectly pick which enemy is hiding it each time. 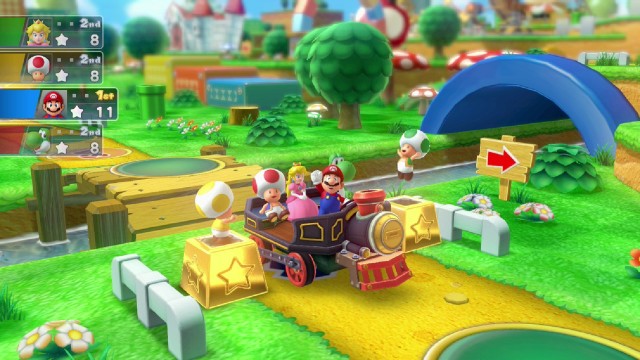 Moving on to the Mario Party mode, this mode as mentioned before plays much like Mario Party 9. Gone are the days of mini-games happening after each player has had a turn, as now they will activate when landing on the mini-game space or at random from landing on various other spaces. As players make their way across the board, they will collect mini stars, and the one with the most mini stars will win the game. Mini stars can be earned by passing through mini star gates, winning mini-games, landing on special chance spaces, and even defeating special bosses. There are plenty of ways to lose mini stars as well, and much of it is luck based, as every player gets a turn to move the cart everyone rides in, meaning by the time one gets another turn, they will usually be quite a bit further ahead and possibly in a worse off predicament than where they last landed. It’s still fun to play with friends, but the mini-games seem a bit more lackluster this time around, with a few gems here and there.

The other new mode, Amiibo Party, can only be played when using any of the Mario series Amiibo. If a player scans a compatible Amiibo, they can play a more traditional version of Mario Party. Each player has to collect coins and then try to redeem them for stars. It’s nice to see this formula return, even if it comes from a simpler board. Luckily, players can change up the board using Amiibo, as it will have four interchangeable corners that can be swapped out for ones based off the various characters. Players will want to place the Gamepad somewhere that is easy for everyone to reach, as they will be scanning Amiibo constantly. Not only will it be used to activate special tokens, but it will also be needed just to roll the die. It can get a bit strenuous to continuously scan the Amiibo figures, but the game mode is still fun, activating a mini-game after each round of turns, just like traditional Mario Party. It’s a commendable effort to try and bring in a new game to use Amiibo for, and even characters that aren’t from the Mario series can be used to activate scratch cards to earn Mario Party points, which can then be used to purchase various items and features of the game. One thing to take note of, as using the Bowser Amiibo will make all mini-games turn to Bowser Party mini-games, and will also prove to be a bit unfair, as Bowser landing on the Bowser space helps him rather than hinders him like for the rest of the players. 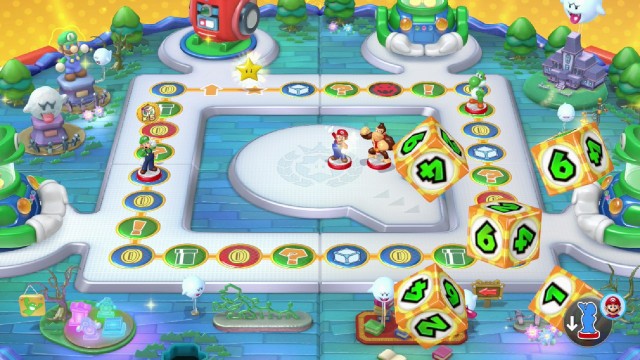 Outside of these three game modes, there are various things here and there, like a mini-game tournament mode, Bowser and Bowser Jr. challenges, and even a photo mode. Much of it feels like filler to just try and make the game feel more complete, but the overall presentation of it all is lacking quite a bit. The menus are a bit dull and the load times are a bit longer than one would expect from a game like this. The graphics are the best the series has ever had, but that would mostly be due to the graphical upgrade to high definition. Even then, there are still problems with anti-aliasing, and lack of details on certain models within the game. It shouldn’t matter too much considering the type of game, but it feels like the game could have been presented a bit better. Mario Party 10 is still a great time with friends, but for people that have played through most of the series, there aren’t too many improvements outside of the graphics, and even though the Bowser Party mode is fun, it will eventually lose it’s luster given only a few mini-games to play.