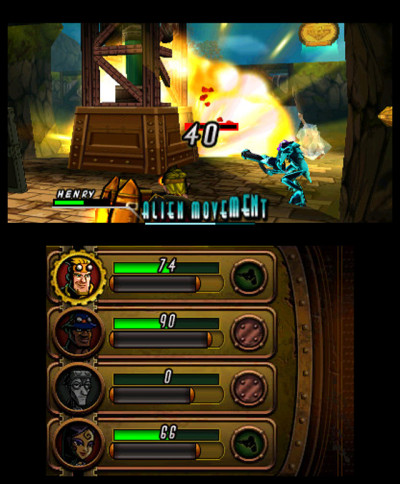 Code Name: S.T.E.A.M. is an interesting project from the long time Fire Emblem developer Intelligent Systems. They are no strangers to the strategy genre and they definitely know how to add various features to make them feel fresh and keep them entertaining. Players will enter the world of a comic book where folktale characters and historical figures work together to stop and alien threat. Take note, this review is based on the game before the update, adding the ability to fast-forward through the enemy phase of turns. Despite the improvement, it will not affect the final score. It is also good to note that playing the game with the New Nintendo 3DS’s c-stick improves the camera control quite a bit, as otherwise a circle-pad pro is required to opt out of the touch screen camera controls.

Taking a cel-shaded style, the game emphasizes the comic book effects by adding visuals for the sound effects and utilizing decorative filters. The game can be easily compared to Sega’s fantastic Valkyria Chronicles franchise, as both are a mix of real-time strategy and third-person action. Fueled by steam, players will be given a set amount of movement and actions they can take during each turn, making it a bit more strategic to form an attack plan. Using up to four characters to place in a squad, it is crucial to utilize steam effectively, not to mention using characters and weapons strategically. The map is full of medals that can be used for saving the game, healing units, or even reviving fallen units to bring them back to battle, and they can even be used to upgrade equipment after the mission.  There are also three gears per map, which unlocks equipment and items throughout the game as more are collected.

The story follows John Henry during an alien attack, and after a few prologue missions, John finds himself recruited into a special task force headed by Abraham Lincoln, known as Code Name: S.T.E.A.M., an acronym for “Strike Team Eliminating the Alien Menace”. Throughout the adventure, he will meet up with more characters like Tom Sawyer, a fantastic scout-like unit, or even the Cowardly Lion from Wizard of Oz, who has the ability to blast enemies using his own body as a weapon. It’s a very quirky story that takes plenty of liberties using these characters in a fantastic presentation, with plenty of high quality voice acting and polished effects. The game gives a lengthy quest with a surprising amount of replay value, as each mission can be replayed with different modifiers like “Merciless” or “No Return”, which make the missions harder but give more rewards. It’s also nice to be able to go through a mission with different characters that weren’t available the first time, giving players access to other areas or making various sections easier. 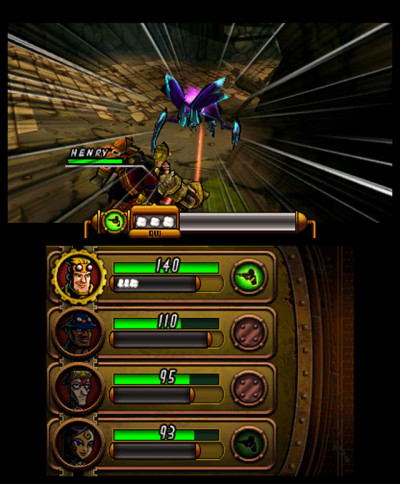 Digging deeper into the gameplay side, players will choose each of their characters to maneuver through the map, moving to each space using a puff of steam. Players can usually backtrack and gain their steam back unless using the “No Return” modifier, and this is often necessary to figure out the best strategy. Getting seen by the enemy with a direct line of sight risks getting caught in “Overwatch” mode, a moment where the enemy can defend themselves and attack the player during their turn with an automatic response. That isn’t to say that players can’t do this as well, as using certain weapons give players the option to set up their own Overwatch, and each attack again will use steam, so it’s typically best to save steam at the end of a turn to keep a safe setup for defending during the enemy turn. There are other little quirks with the steam system that may need to be experienced, suchas collecting medals, which does not effect steam usage, but collecting a health pack or performing an attack will prevent players from reversing any actions. There are also terminals set up in many missions that will give tips, but will also refill the steam gauge, though each terminal will only do this once before never showing up in the game again, so use them wisely.

The game supports amiibo as well, which acts as more of a character unlock than anything else, as using any Fire Emblem amiibo (Marth and Ike being the only ones available as of this writing) will unlock the character for use in a squad. The other two, Robin and Lucina, will become available in the coming months. If an Amiibo character falls in battle, players will have to rescan the character into the game to use them again, unless the mission is reset of course. Ike ended up being a fairly powerful unit, having a great ranged attack with his sword Ragnell, as well as a powerful short-range attack with his axe Urvan. Unlike the main characters, the amiibo characters have no ability to swap weapons or abilities, and are set aside as guest characters that take no part in the story, though they do have voice acting, including the first official English voice for Marth in a video game. 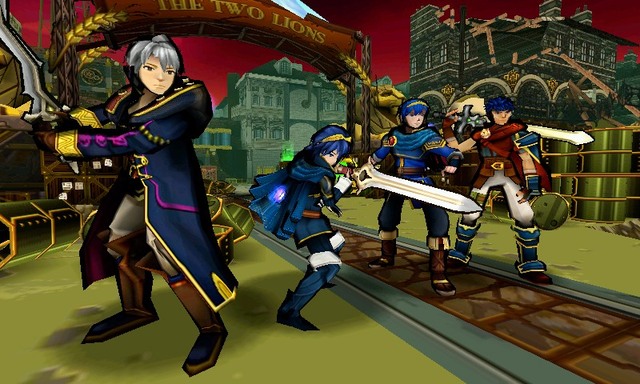 Multiplayer mode works online or locally, and can give players a fun little distraction if they can find a match online or a dedicated friend to play against locally.  Death Match plays very much like the main game, though turns are limited to 60 seconds and there is a 30 turn limit for the game mode.  Both players are tasked with eliminating each other and the player that comes out on top gets a medal bonus. Medal match is more of a collecting game, as defeating enemies will make them lose their collected medals, making them available to collect by the opposing player. Again, the winner gets a nice medal bonus that can be used for the main game, so it’s well worth the time, not to mention a lot more intense than a story mission.  Overall, Code Name: S.T.E.A.M. has a lot going for it, and if the ending of the game is any indication, we could potentially see a sequel to the game in the future.  Even if not continuing off the story of this game, the comic book format can make a future installment fairly easy to imagine.