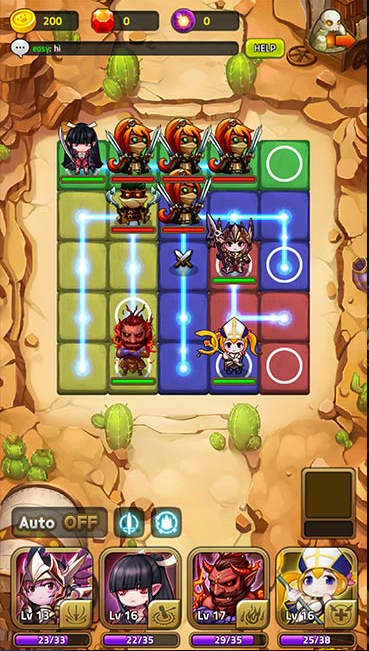 Today GAMEVIL announced the upcoming release of the puzzle RPG Dungeon Link, which was developed by the San Jose studio KONG STUDIOS.

In Dungeon Link, players will be solving puzzles in a quest to defeat the powerful Demon King and bring peace and order to the land of Kanterbury. The main gameplay will have you eliminating enemies by connecting color-coded dots across a grid. In addition, you will be able to enhance your attack by filling the entire board or linking multiple colors together. As you advance through the game, you will be able to recruit and summon over 200 heroes, each with their own distinct abilities, and customize their teams for maximum impact.

The co-founders of KONG STUDIOS, Won and Jee, met back in 2008 as graduate students at the School of Computer Science at Carnegie Mellon University. Leveraging their Computer Science background they teamed up to create the San Jose-based game studio in 2013, and continued to evolve their game’s story, mode, and characters.

Dungeon Link is set to release on April 21, 2015. Gamers can sign up for a pre-launch package of in-game items worth more than $25 USD by using the following link: http://global.gamevil.com/event2/dl_pre/en/index.html?utm_source=generalEN&utm_medium=link&utm_term=preregEN&utm_content=click&utm_campaign=genEN&event_seq=1