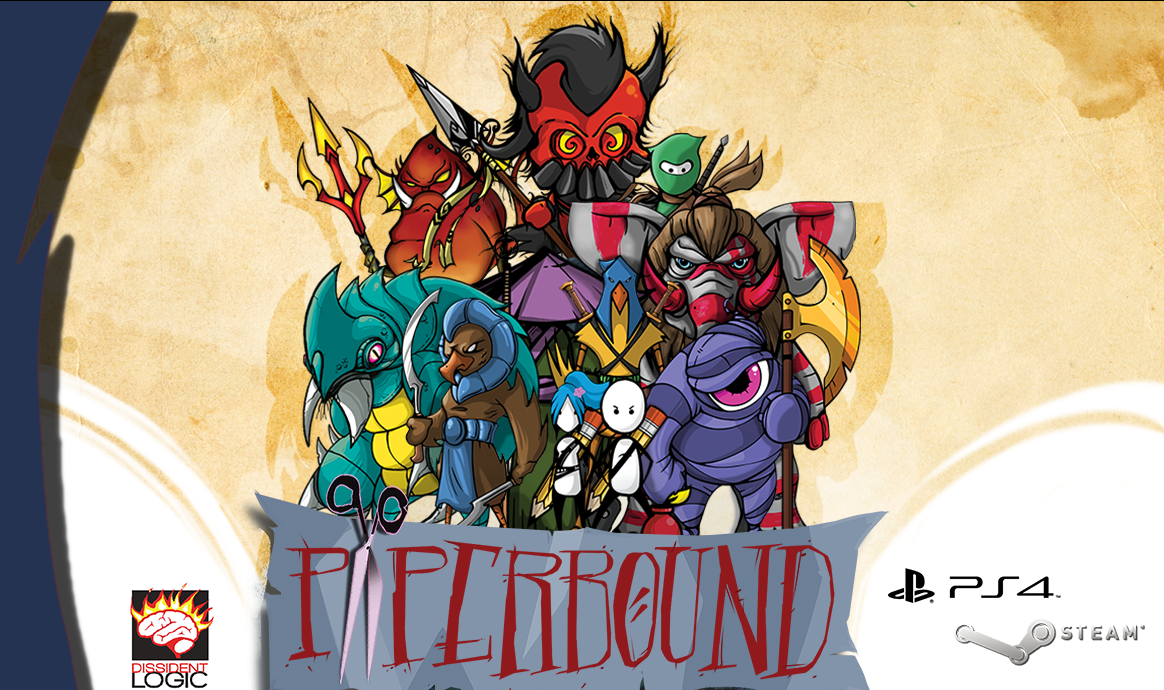 There’s something about couch multiplayer, whether it’s the thrill of pulling off an amazing move, leaving your pal dumbfounded next to you as you gloat and watch his reaction or attempting to do something to distract your opponent on the couch next to you in real life so that you can gain an advantage in-game. Paperbound is a title built around these thrills, completely developed by the one man operation of Dissident Logic.

Because it is built from the ground up with local multiplayer in mind, there is no online mode. As such, you have really two options as far as filling up teams: You can play with all humans locally or you can fill up any needed slots with bots. And while the bots can be competent enough, unless you have at least one human playing with you, the game can start to feel old rather quickly.

There are a variety of characters available to choose rom, as the game grants you 11 different characters to choose from. Each can utilize a variety of color skews, which should allow players to keep track of their fighters during the fights. Several characters from other popular indie games also guest star in the game, such as Guacamelee’s Jaun Aguacate and Captain Viridian from VVVVVV.

Apart from the animations and cosmetic differences, however, each of Paperbound’s characters feel and play the same. You have a melee attack, can lob scissors at your opponent, and can even throw devastating ink bombs. Paperbound utilizes a one-hit kill system, so matches can quickly become quite frantic as four players struggle to kill each other or complete objectives, such as capture the quill/flag.

What really sets Paperbound apart, however, is the game’s gravity mechanic. This mechanic allows you to swap your own field of gravity with a simple button press. Want to run up a wall then quickly shift gravity so you fall back to the opposing wall? Very possible, and,  in fact, likely a smart idea in the fray. This mechanic leads to rather hectic matches as people start flying all over the screen, throwing scissors and bombs at each other. Indeed, there were a few times when I lost track of my character and ended up being killed because of it.

Once you have achieved your goal, the game doesn’t simply end. You’ll have to hop through a tear in the book to escape, and if you’re killed in a death-match round, you’ll have to kill somebody else to reopen this tear. This feature allows gamers to never feel too steamrolled by the competition, as you always have a chance to kill the leader and stop him from escaping, thus increasing your own kill count at the same time, essentially killing two birds with one stone.

The stages themselves are set in five iconic books, and offer enough variety to keep things interesting. Some will be closed-in arenas with nothing special, while others will have rips in the sides. Going through one will teleport you to the other side of the map in these stages. Still other stages will have deadly hazards in the environment.

Overall, Paperbound is a fun, exciting brawler that accomplishes exactly what it set out to do. It is exactly what it was built to be, but one has to wonder if the lack of online doesn’t hurt it a bit. Overall, however, if you have a set of pals that you can regularly invite over to game with, Paperbound is worth the $9.99. If, however, you’re a gamer who mostly plays online and/or can’t count on your pals gaming locally with you, you may want to give it a pass for now.

With that in mind, it should be noted that the score won’t be affected by the lack of online. If it is a huge issue for you, then take off 1 and you’ll have the thoughts there.