Recently 2K and Turtle Rock Studios announced new upcoming downloadable content for Evolve. This downloadable content, or DLC, will introduce the fourth playable monster, known as Behemoth, four new playable hunters, two free maps, a new Observer Mode, and more that has yet to be revealed. If you opt not to purchase the DLC, you can still play alongside (or against) the new characters online or against them offline, ensuring that the community won’t be divided based on what they own.

First up we’ll look at the Behemoth in detail. This mighty beast is a tank that can become a huge boulder in order to roll through the environment for quick traversal. The Behemoth is so powerful that it can summon forth massive walls of rock in order to block off terrain, isolate and destroy hunters, or even shield itself from the weapons hunters utilize.

With his massive size and strength come a few drawbacks. Because he is so huge he cannot leap or jump, and though he is able to climb, he does so quite slowly. Thanks to the beast’s slow climb and huge size, this is rarely a good idea, as you’re quite an easy target. Of all the monsters, however, he has the most armor and the most health, as well as the following abilities (taken from Evolve’s official site):

Lava Bombs: Effective at short and long range, these mortar bombs shatter into fragments and continue to burn the area around them, including any Hunters who find themselves in the damage radius.

Rock Wall: Creates a large, semi-circular rock structure that either traps victims inside with Behemoth, or locks him away from attackers.

Tongue Grab: Behemoth uses his harpoon-like tongue to snatch a distant target and pull it into melee.

Fissure: A wave of destruction blasts out of Behemoth, fracturing the terrain and scalding and stunning everything in its path.

Next up are the four new Hunters. The first of these is a cyborg Assault character utilizing a mortar cannon as an arm, known as Torvald. Crow, a Trapper with a pet Batray utilized for tracking these Monsters joins the cyborg. Third up is Slim, a genetically modified combat Medic. Last, but not least, is a Support character utilizing a mininuke grenade launcher, known as Sunny. You can check out more details on the official site. 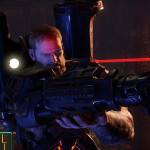 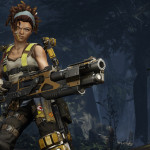 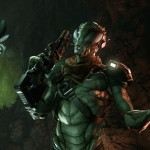 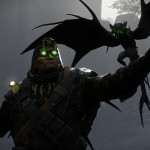 Tatiana already covered the maps earlier in the month, which leaves us with the free feature, Observer Mode. This feature is designed to provide the community with the tools necessary to observe and add commentary to the game, allowing a sixth user to passively enter a custom game. This serves the purpose of “enhancing any live streaming by seamlessly switching to view any of the five players,” Turtle Rock and 2K stated. “Observer Mode includes an informative HUD that updates in real time throughout the match, showcasing player health, survival odds, perks, the mini-map, and more.” You can find complete details here.

What do you think of these new modes?