I Majored In Digital Football

So the other day I read that ESPN is now going to start paying college students to compete in Blizzards upcoming game, “Heroes of the Storm”, and the winning team is going to get the rest of their tuition PAID IN FULL.

Ok, so this is cool and all-like yay corporations helping people and stuff-but does this open a floodgate of options? Where can I sign a contract to start making money by playing Kinectimals on Animal Planet? How about WW2 shooters on The History Channel? What about if I played Rock Band on MTV, oh, wait, they don’t play music. Nevermind. Now I’m snarky, and the only real sports games I ever played were NHL 95 on the Sega Genesis and also on the Genesis Mutant League Hockey, both phenomenal, but that’s where my real history with sports games ends. I don’t like playing sports outdoors. Of course digital sports isn’t going to change my mind on anything. As a child, my parents-especially my stepfather-were trying to get me into more outdoors activities and such. Confidence building! Cooperation! Lifelong sustaining physical injuries that eventually cost your parents their life savings and their mortgage! Who could resist?! But low key ribbing aside, they tried endlessly and frankly I wasn’t interested then. I didn’t enjoy the idea of chasing a ball around or team building exercises, I was focused on more personal, reflective things such as art, and world domination.

But ok, let’s take a more professional look at this, shall we? First off, check out this bit from the article:

Yeah, ok. They do those things. For kids who play sports, and get in on a scholarship playing sports. But what does it do for the kids who work their butts off, get perfect marks and STILL don’t get accepted to the schools? NOTHING. Meanwhile, the budget for the college is cut and courses are dropped because colleges are paying their football coaches outrageous frickin amounts. Look at this graph from a recent New York Times economic article: 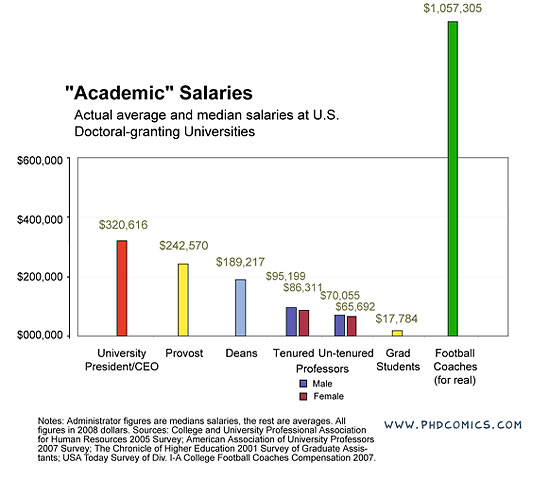 And its understandable. When people say something like “Baseball is our national past time”, they mean it. The money that sports capitalizes on and brings into the American economy is ASTONISHING. But gaming is becoming so much bigger and bigger, money more at stake now, that they’re finally going to start pairing it with things that also make tons of money. These both are incredible money makers and it’s only logical to want to combine them in a way that would bring in EVEN MORE money. Because the students aren’t the only ones who benefit from this. Blizzard and ESPN also benefit, heavily, from this arrangement. ESPN benefits from nerds tuning in to witness this bizarre spectacle and Blizzard benefits purely from good exposure on the whole. No advertisement is bad advertisement. Because this isn’t a commercial. This isn’t a thing that a game company sells to a high priced event like The Super Bowl. No, this is a WHOLE SERIES of people playing this Blizzard game, which means Blizzard is going to be EVEN MORE RELEVANT. Relevancy is how you stay monetarily on top in the business world. If people aren’t talking about you, they generally aren’t buying your products or at least you aren’t doing AS well as the companies that they ARE talking about.

And this isn’t the first time ESPN or someone else has done this sort of thing but it is the first time it’s been done on this large of a scale. Let me do some math for you. In 2014, a 30 second spot in the Super Bowl was 4 million while a 60 second spot was 8 million. THAT’S TO AIR A COMMERCIAL. Don’t believe me? Check it. And that’s not to mention that the production cost for a single spot is worth 1 million, depending on the spot itself obviously, and if you’re shooting in game material your production cost is going to be significantly lower but still. That’s a lot of money to air a 30 or 60 second spot about shooting Nazi Zombies in the face, and HOPING it’s enough to persuade people to buy your game. Take that knowledge, those numbers, and apply them to this premise, where it’s not just a spot but an entire series dedicated to watching kids play this game. ESPN and Blizzard are poised to make a boatload of money off of this arrangement, then pay for the college kids’ tuitions and act like they’re the good guys when in actuality, the kids should’ve been able to afford freaking college to begin with. They shouldn’t have to say, “I only graduated because ESPN paid me.”

Maggie Rose is a 25 y/o trans lesbian. She currently lives in Olympia with her girlfriend and together they fight crime, put an end to injustice and sometimes do laundry. She is a writer because she has no other skills or applicable talents useable for monetary gain.