Review | The Awakened Fate Ultimatum: What will you choose?

We’ve recently had a chance to check out a new dungeon-crawling game from Nippon Ichi Software, known as The Awakened Fate Ultimatum. What decisions will you be forced to make? Or should you skip all decisions in-game by passing on the game itself? 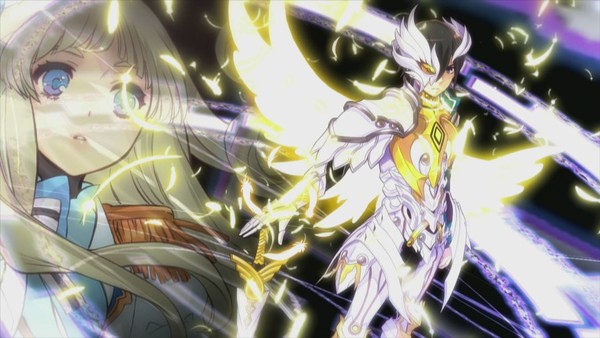 In The Awakened Fate Ultimatum, you are thrust into the shoes of one Shin Kamikaze. This young man has a rather pessimistic outlook on life, finding it very nearly impossible to trust anybody, with only a couple of exceptions. One day, Shin encounters some mysterious people, who are soon revealed to be demons.

These demons are plotting to kill Shin, but an angel by the name of Jupiel quickly shows up to save him. Unfortunately, the demons refuse to go away without achieving their goal, and, despite the angel’s best efforts, manage to slay Shin.

Soon Shin awakens, and it is revealed that he has been revived in order to become God. Shin, with his major trust issues, doesn’t believe the story at first, and refuses to cooperate. Things take a turn, however, and Shin is forced to take a major role in the battle between angels and demons, good and evil, with every single one of his decisions carrying consequences that will weigh on the former human’s heart.

The game is essentially split into two parts, namely dungeon-crawling and decision-based storytelling. The latter will constantly test your resolve, giving you many choices that present ethical and moral quandaries. One such example, without giving much of the story away, occurs within an hour of the game. Shortly after being revived, demons lead an assault on the angelic realm of Celestia. Shin sees several injured angels, and must decide: Does he save the angels directly in front of him and allow the bigger threat to continue attacking, or does he focus on the larger threat and allow the angels in front of him to be butchered?

There are many more decisions that are even more difficult, and most don’t have any solid “Right” or “Wrong” answer. Although some decisions can end the game immediately (just like those in the good old “choose your own adventure” novels), most will allow you to continue the game, and spell out the consequences of your choice. In the above example, I initially opted to protect those in front of me, trusting in the others to take out the major threat, and was resoundingly chastised for my decision, leaving me to wonder if I had done the right thing.

Between these decisions lies the second part, the dungeon-crawling. These dungeons are really a catalyst to connect the game’s story points, with each one being randomly generated. Inside these dungeons you can swap between angel and devil forms, with each being more effective against the other, allowing you to dish out more damage and take more damage from demonic enemies when in angel form and vice versa. 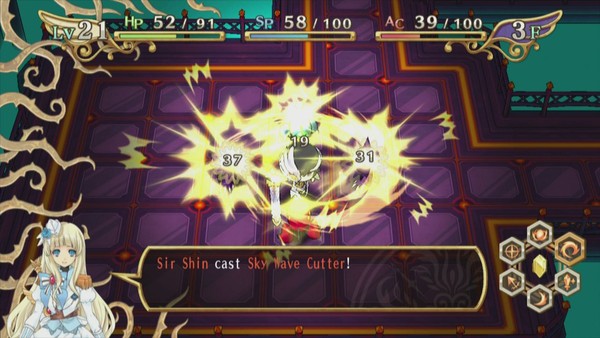 You can choose which items to take in before you enter any dungeon, although you may want to consider your options carefully. If you die in a dungeon, you will lose all items you have on you, though you will keep your money. This creates an interesting risk-versus-reward situation as you consider if it would be worth it to take in your very best equipment, thus risking losing it if you get ambushed by strong foes, or if you’d rather take in weaker equipment and raise the chances of being killed.

As you wander through these dungeons, you will gradually decrease an exhaustion meter. This meter is gradual and tends to allow for plenty of time, while the other two bars, your health and spell bars, tend to fill relatively quickly. As you explore, you’ll find the standard NISA fare of expressive and colorful designs in the game’s enemies, with not even the massive opponents being too visually intimidating in order to not break the appeal of purging the dungeons of their inhabitants. 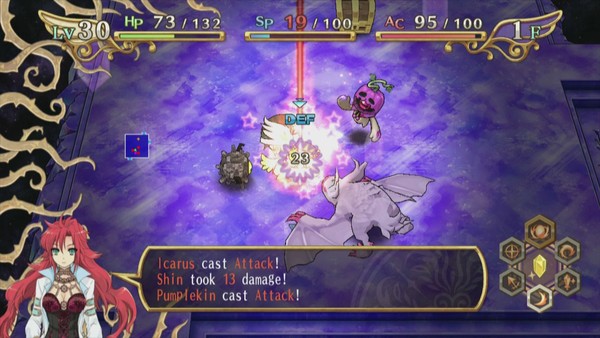 As you level up you’ll gain points that you can utilize to upgrade one of your two forms. Each form’s upgrades tend to be unique to that specific form, so while you can focus solely on angel and ignore demon, for example, doing so can land you in a huge mess when you enter a dungeon comprised mostly of angelic enemies. As such, it’s typically best to keep a balance between your forms so that you’ll always be ready for both types of enemies.

You can also gain points for each of the forms by making decisions that lean toward the corresponding side. Siding with Jupiel will gain you angelic points, while siding with the demonic Arle will net you demonic points.

The Awakened Fate Ultimatum is a pretty decent ride, though the sheer randomness behind each dungeon can lead to some unfair seeming situations. The game’s story, however, mostly makes up for this, and the gameplay is solid enough. The ethical quandaries that the game presents are quite interesting and will likely keep many involved in the story all the way through at least once, and quite possibly even more so they can  discover what will happen if they make different decisions.

The game’s drawbacks, however, will likely turn just as many off. The randomness presented in each dungeon can easily make any of your planning go for naught, and, though it does try, The Awakened Fate Ultimatum doesn’t manage to find a good middle ground between visual novel and dungeon-crawler. It feels like it wastes so much potential it could have had if it had indeed focused on one of these two genres rather than try to combine them.