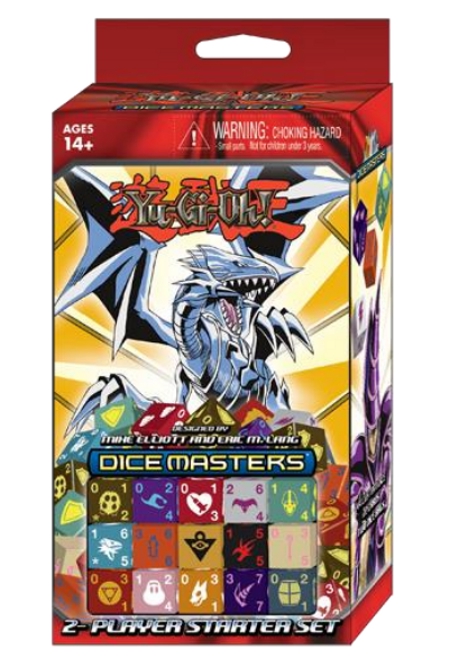 Welcome to Board Buzz, an occasional feature that will take a look at new and popular board games, card games, dice games and more. If you can play it on a table, you can find it here..

For the first feature, we’ll be looking at Yu-Gi-Oh Dice Masters, which takes the popularity of the X-Men Dice Masters game and makes it a bit kid friendlier.

As you can gather from the name, the game focuses mainly on dice, meaning you better hope your luck is great. The starter deck, which retails for $14.99, features 22 cards and 44 dice, enough for two players to pick up and go.

Each player selects up to six monster cards to represent their team (for the first time, they suggest two cards to make it easier). On those six cards, up to 20 specialty dice can be placed on the cards, with a max of four dice on one card (every monster card has unique dice that coincide with it). The players also choose four action cards with different abilities both can use as well and put action dice on them.

After setting the game up, players take their eight regular dice and put them into their dice bag. Each round, they draw four dice out of the bag and roll them.

Regular dice have two different effects: the chance of a sidekick with one health and one attack that can be used to attack or defend, or one of five different symbols that can be used to buy a special monster dice or action dice. Each specialty dice costs a certain amount of energy you roll, with stronger cards costing more energy, as noted on each card.

Each round, players get two rolls, with the option to keep dice frozen and rolling the rest of the dice. After the second roll, they can place dice in the attack zone if they can pay the energy to summon them, or they can use energy to buy new dice. Once a dice is used, it goes to the discard pile. Dice aren’t put back into the bag until all the dice from the bag is used. Then, all dice go back in, it’s shaken up and more dice are picked out for the next round.

If you do roll a monster or sidekick and can pay the energy cost to summon it, they are placed in the field zone. From there, you can either move them up to attack or leave them in the field zone to defend against an attack later on. 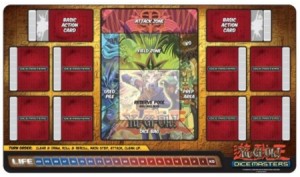 If the attack is successful, the dice goes to the discard pile after the attack. If the dice is knocked out from an attack or defense, it goes to the defeated zone, where it’s added in to your normal five dice roll for a chance to summon it again.

Play continues back and forth until a player loses all 20 of their health from attacks or from special abilities monsters and action cards have.

Overall, after explaining the game for a few minutes and picking teams out, it’s relatively simple to pick up and go. Some of the abilities may take an explanation, but players pick up quickly that they need to try and roll to buy bigger and better dice quick to start attacking. Sometimes, defense is forgotten early on, but after a few attacks new players also remember to keep a dice or two back to withstand strong attacks as well.

Now, for a few tips. It’s a good idea to choose a variety of monsters. You don’t want all six of your monsters to need the exact same type of energy to use. Otherwise, you’ll only be able to buy one monster dice at a time. With a variety, you may be able to add two-three monsters with a good roll.

Also, don’t forget about the action cards in the middle of the table. Those skills can come in handy to block attacks or add damage. Plus, some have a universal action that you can pay to use no matter what. 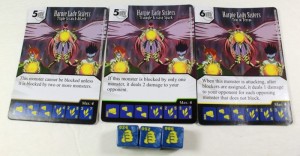 While big monsters are nice, the little guys can be quick hitters, especially if they have a good skill to back them up. An example of this is booster pack card Injection Fairy Lily. By taking two damage, you can raise her attack up to 7, taking a third of their life away in one hit if they don’t have a defender. Plus, she only costs three energy, one of which is a power type.

Now, for the good and bad of the game. Like a card game, the game relies on buying booster packs to be competitive. The base game only comes with two unique monster dice per card. To get more dice and help your chances when rolling, you have to try and pull additional monster cards of that time to get that unique dice.

Thankfully, boosters only cost $.99 per pack. However, each pack only has two dice and two cards. So, if you’re really wanting to get into the game and get some dice, be prepared to drop some cash to get the rare cards to use and enough dice to use them. Otherwise, you’ll have a rare card like the Winged Dragon of Ra, but only one dice to use with it.

Overall, if you’ve played the Yu-Gi-Oh card game before, the Dicemaster version is a lot simpler to pick up and play. Like the card game, though, be prepared to drop some decent money on booster packs to get the cards and dice you need to be competitive. If all you do is play with a friend, though, you should have no problem being entertained with the starting deck for a while, trying out different combinations of monsters and action cards.