Having recently finished off AlienTrap Games’ latest title, Apotheon, I came away feeling impressed. Apotheon is a beautiful game, with an art style lifted straight from Ancient Greek pottery, and the game’s story starts off with a bang.

In the beginning of Apotheon, Zeus has decided to abandon humanity and convinced the rest of the deities to do the same. What this means for the planet and its people is quite simple: It will wither and die, right along with the inhabitants. 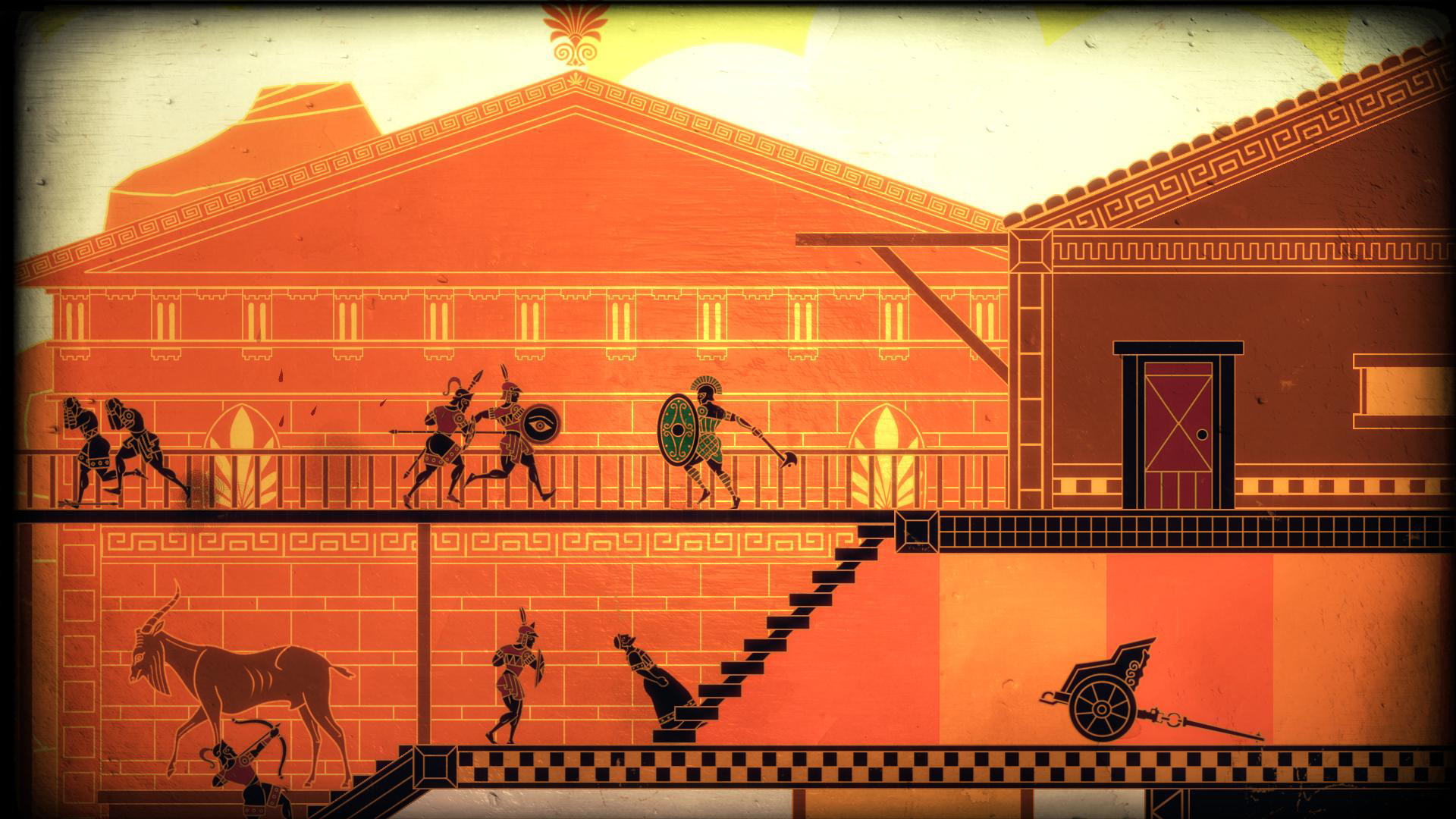 You will take on the role of a soldier named Nikandreos as you team up with the spiteful wife of Zeus, Hera. Your goal is to take on the gods one by one, thus earning their upgrades as you defeat each deity. You may be thinking that this sounds a lot like God of War, at least in part since the two games draw from the same pantheon, but I assure you that Apotheon is quite different in tone, look, and even gameplay, so you should have no fear that it’s just a “God of War rip-off”.

Apotheon’s combat utilizes both mouse and keyboard for the PC version, with the option to utilize a controller (being more of a console gamer, I felt much more comfortable with the controller than the keyboard controls, even after I remapped them, though you may prefer keyboard/mouse). In the case of the controller, it functions a bit like a twin-stick shooter, placing movement on your left analog stick and aiming with the right. Your directional pad will allow you to swap between weapons, and there are plenty of weapons for you to choose from as the game advances.

During combat you can block high, medium, and low attacks from enemies by utilizing a shield. You’ll also be able to dish out overhead slashes, medium thrusts, and low hacks, allowing you to attack certain, unguarded parts on your foes. Each weapon has its own strengths and weaknesses as well. Swords, for example, are fairly quick and dish out medium damage on average. A spear is a little slower than your sword, but offers greater range. A war hammer offers up devastating damage, but much slower swing time. Range weapons, such as arrows, also offer a bit of variety in precise aiming and quick-shot options. 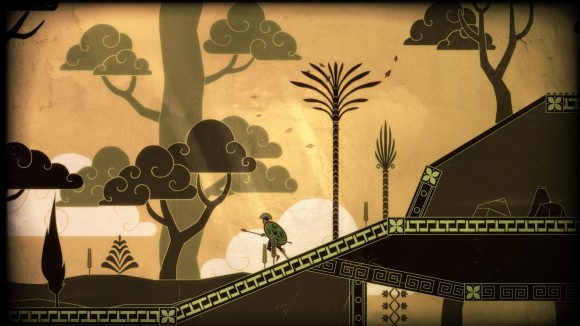 All told, the variety of these weapons adds in a bit of strategy, particularly since you’ll be unable to stick to a single strategy. Each weapon, after all, has a set amount of durability and will eventually break. If, for example, you decide to stick with swords, run into a horde of enemies, and your sword breaks leaving you only a slow swinging weapon, you can be in quite a bit of trouble, as the horde may very well attack you much faster than you can retaliate, thus taking you down. Of course the AI doesn’t simply utilize a mindless “Let’s swarm this guy!” type approach, but will instead react to the player. You’re taking on some enemies and decide to swap to a ranged weapon? Those enemies may decide to swap to a ranged weapon of their own to retaliate, or they may charge you with shields raised (thus blocking your projectiles) and slash at you.

Once you have defeated these enemies, they can drop items. This brings us into another of the game’s components; the crafting. As you advance through the game you will be able to find various recipes. Once found (if you have the correct materials from enemies), you can utilize these recipes to craft consumables such as potions, bombs, and other useful, disposable items.

Because you can access your inventory at any time, swapping between weapons isn’t too difficult. I did have some issue with swapping quickly when I utilized the mouse/keyboard combo, but I would chalk that up to more my controller preference, especially since it didn’t take anywhere near as long for me to swap weapons when I utilized one. 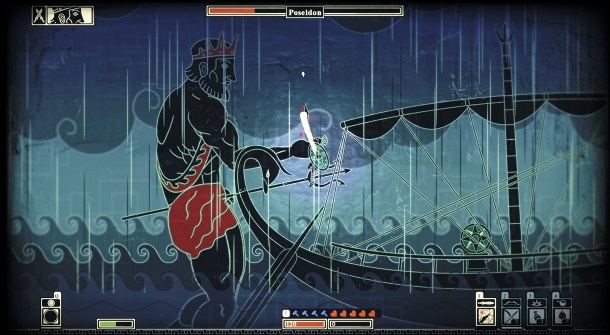 Perhaps the most impressive aspect of Apotheon comes in the sheer variety and freshness of the levels and the boss fights. Every stage is build around the theme of its associated god. For example, Poseidon’s area gives you a huge ocean to sail around in, allowing you to visit dungeons located on islands or even swim in cave networks underwater as you search for hidden rivers. The temple of Ares reflects the deity’s personification of the violent, untamed nature of war, complete with blood rivers and inhabitants that are constantly forced to kill each other. Athena, on the other hand, resides in a huge spinning labyrinth that is filled with traps and clever puzzles, requiring both dexterity and intelligence to master.

Each of the boss fights also features something to make it unique. In order not to spoil too much, I’ll simply speak of one of my favorite fights in the game, the battle with Artemis. During this fight, you will take turns as both the hunter and the hunted, swapping between human and deer form as you and she take turns trying to take each other out. 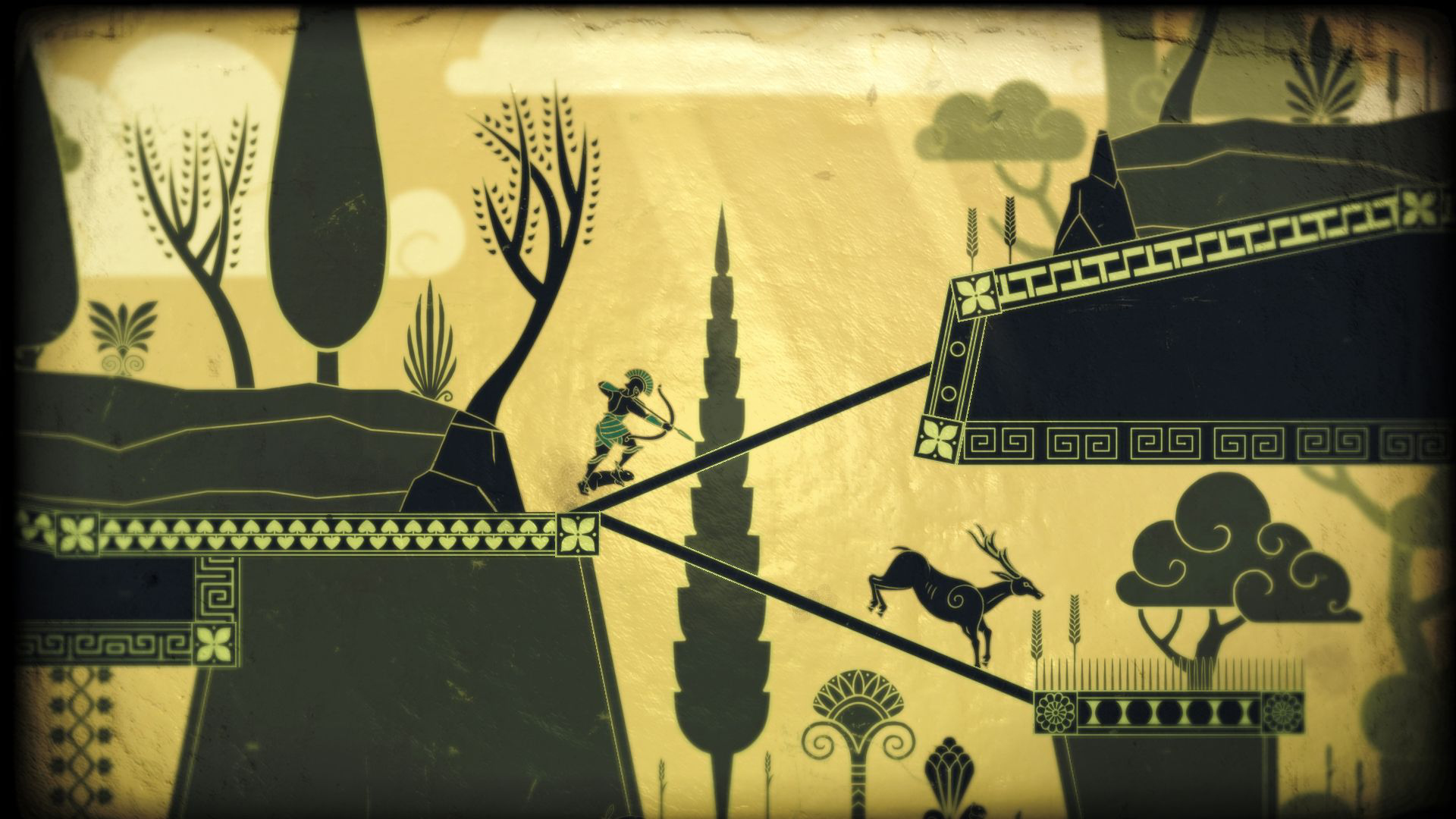 Will you be the hunter or the hunted? It turns out the answer is “both”!

The game does have some issues, however. Platforming doesn’t feel as spot-on as it should, perhaps due in part because of the unique art style. There were several points in which I felt like I should’ve been able to make a certain jump, only to miss and fall, taking damage. Nikandreos also tends to stick to corners like gum at times, which can be useful in some instances and painful when trying to get away, only to get stuck on a corner and smacked as you recover.

Apotheon is quite an enjoyable ride, with each role in the game (except for our hero, Nikandreos) being fully voiced (and I must say, the actors tend to put on quite a strong performance), great pacing, and a good soundtrack. Though there are flaws with the game, most fans of exploration-based titles like this one will likely be able to overlook them without difficulty. If you’re a PS+ subscriber and you still aren’t sure if you want to purchase it, then you can always pick it up for free, since it is currently part of the IGC this month!