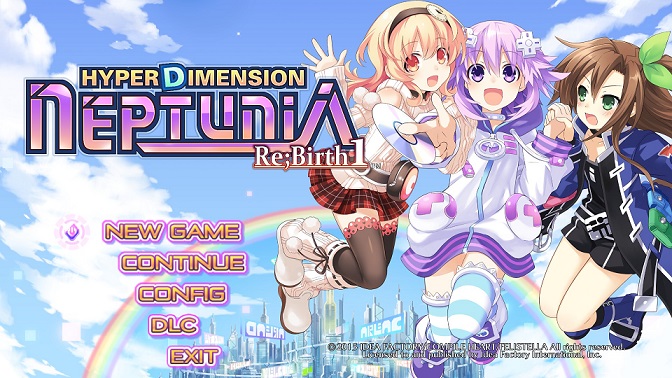 With all the anime side boob going on in this game, it is one tentacle monster short of being bumped from Teen to Mature rating. Despite a Teen rating, they do not miss an opportunity to do a boob jiggle, or insert some suggestive dialogue; within 5 minutes of starting the game the main character was nude off screen followed shortly by a pretty kinky looking bondage scene (boobie jiggle included!). 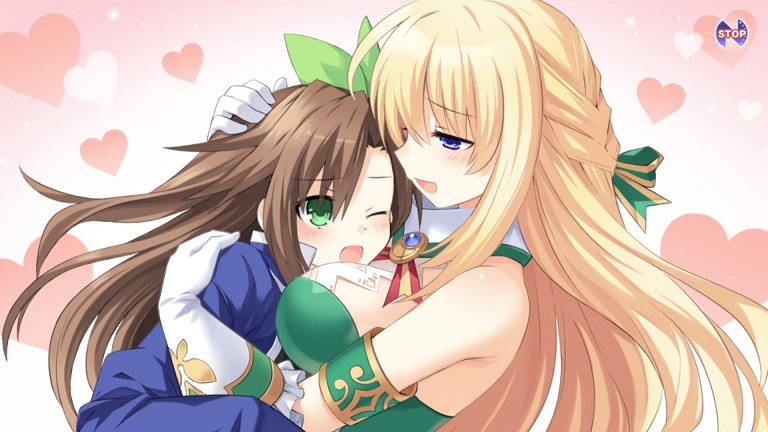 Aside from suggestive boobie themed cut scenes, one of the first things I noticed is that the voice overs do not match up with the mouth movements. It is kind of like watching a dubbed anime, which may add some authenticity for players looking to play an anime (which is what this game feels like). Another irksome issue is that the text occasionally goes outside the text box.

This game plays a lot like a classic RPG minus all the running around between objectives. Moving around on the world map is as simple as selecting the location I want to go to. Having recently finished a playthrough of Breath of Fire 2 on the SNES, I can appreciate not having to run back and forth on errands for every townsperson in need, and being able to just warp straight to the action.

The keyboard controls are far from intuitive, so I ended up having to plug in my Xbox 360 controller.   The game is much easier to play now with the analogue stick and button layout, but for a PC game, the controls could have been thought out much better.

The controls to this game also include a jump which has severely limited use other than WOW-style jump-running. Neptune also says cutesy things while jumping (“boingy…jump”), which is somewhat amusing. On a side note, my four year old niece thinks it is hilarious every time Neptune says “boingy,” which she then starts to repeat, while jumping around my room while I am playing.

The combat system is interesting in this game. It is a turn based combat system similar to many RPGs. One most noticeable difference is that each character has a hit box for their attacks which, if oriented properly, can hit multiple enemies. This applies to enemy attacks as well, so it is advantageous to spread the party out when in combat. Different weapons equipped can affect the size and shape of the hit box as well. 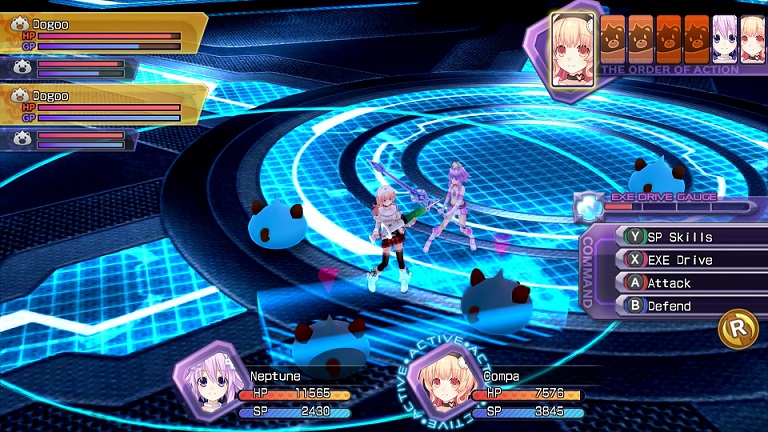 Enemies have 2 bars to blow through in combat. There is the HP bar, which is like most other HP bars for RPGs (when it hits 0 they die). The other bar represents the enemy’s defenses. If you knock down the defense bar, the enemy will take more damage from other attacks. Against most bosses it is helpful to take down the defenses first, so your character’s super attacks hit for full damage. For how long it takes to charge up the EXE bar (for special attacks), you will want to maximize the damage against bosses by taking out their defenses first. As you get better attacks, and upgrades to increase EXE generation, this becomes less of an issue toward the end of the first playthrough. As “first playthrough” implies, this game has a “new game +” feature similar to many RPGs, where you can start the game over with all the EXP, items, and unlocks that were earned during the first playthrough. I have just started my second playthrough, and now that I understand how the unlock (crafting) system works a bit better, I intend to spend this run completing all of the side objectives and unlocking everything imaginable. 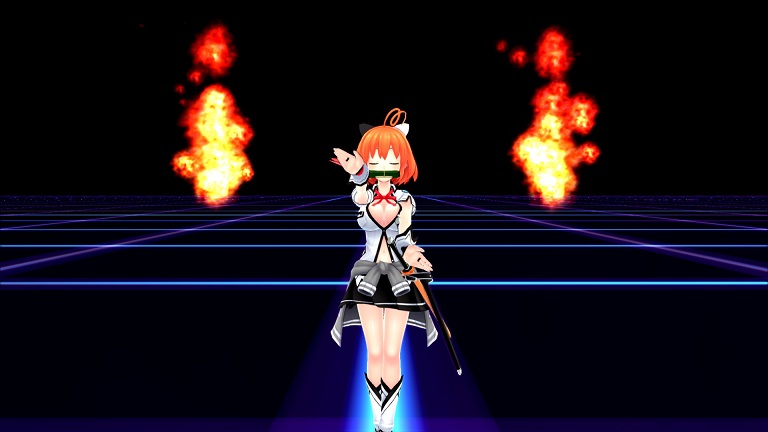 This game also has an arena system similar to FFX, where you can fight against super monsters for prizes. Unlike dying to normal monsters, if you lose in the Coliseum, you do not need to load from your last save game. This game does not auto-save either, so say the mantra with me “save early, save often.” I found myself saving a lot more than I usually would due to an occasional crash I would experience after combat. It seems to happen when I hit the button to skip the victory animation and, although infrequent, it is very annoying.

One major annoyance with the combat system is that every time a character’s turn comes up in combat, the camera starts off facing that character. Unless I am already facing the monster I want to attack I need to spin the camera all the way around so I can line up my next attack. This is especially annoying on bosses who are too big to see over, so unless I spin the camera (or look at the bottom of the screen) I can’t see who I have selected. This is not game breaking, but it gets very annoying. There is a button to snap the camera around to look the same direction as the selected character is facing, but having to do that for every character’s move in every combat gets tiresome.

For NGE (or <insert mech series>) fans, each CPU has HDD (Hard Drive Divinity) mode, which basically turns them into a killing robot. While in HDD, the CPUs have stat buffs, but their combat abilities are the same as they were before. 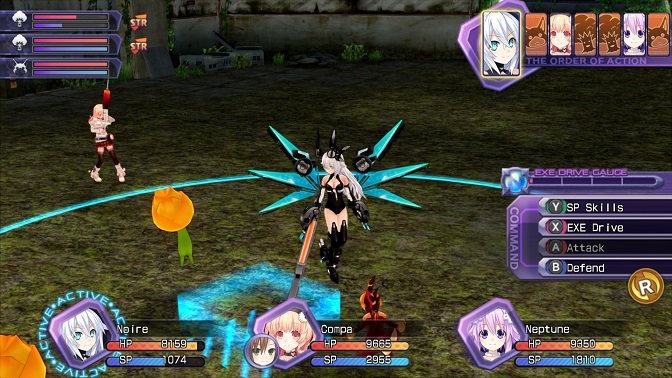 The game is set in Gamindustri (“Game Industry”), where the world is divided into four sections. Each section is defended by a CPU (goddess), and the CPUs have been locked in an eternal struggle called the “Console Wars.” Until the beginning of the game, the four CPUs have been locked in a stale-mate, until three of them team up against Purple Heart (you), which is where the story begins. You have fallen from the sky and lost your memory (convenient plot device). Without ruining the story for anyone interested in this game I will say that it progresses from this point much like many classic RPGs (with the added boobie jiggle). 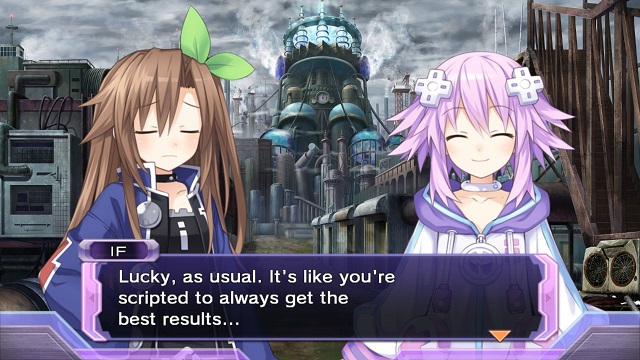 Despite being geared toward a younger audience, there are many old video game and pop-culture references. They even borrowed “all work and no play makes Jack a dull boy;” I doubt many teenagers have seen the Shining. For gamers and pop culture buffs, there are numerous nostalgic references as you progress through the story, like a character named Tekken (guess what she is referencing) the masochistic brawler, and Hyrarule Forest (gee, I wonder what that’s from). And for people who don’t care about the story, there is a convenient “skip” button you can hit during the dialogues to turbo through them. There is also a button to clear the text off the screen and pause the conversation so you can inspect the jiggle a bit closer and snap a few screen shots! 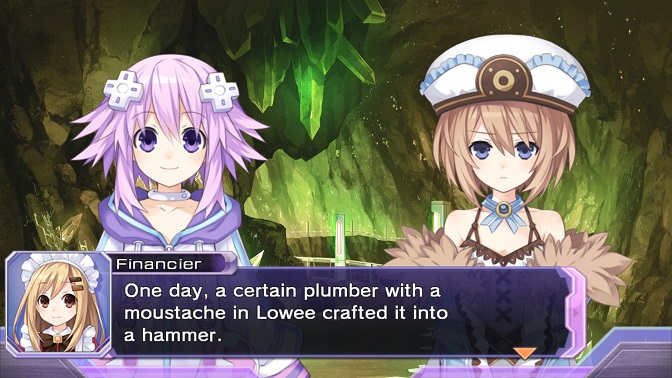 For people who like to play dress up, you are in luck! Each character comes with an unlockable bikini, and numerous other outfits and accessories. These can be unlocked with “Plans” along with additional dungeons, equipment, and items. At first the crafting system seemed a bit overwhelming, but by the end of my first playthrough I had pretty much mastered it. The trick is to stock up on the unique drops from each different monster in a zone when you are there. The plans you find in that dungeon will (mostly) use the materials found there. You are also periodically given plans by NPCs on the world map.

All in all, for a game with such a seemingly shallow theme, Hyperdimension Neptunia Re;Birth 1 is a surprisingly good game. I logged about 30 hours on my first playthrough, although I probably could have finished the story in less time if I didn’t get distracted with side missions and killing big monsters. Still, for its relatively modest $30 price tag, it offers many hours of entertainment. For those who want more, they offer 3 DLCs (99¢ each) that increase the max level by 300 each (to 999) and also add more Coliseum battles. I haven’t tried any of the DLC, but the pricetag makes it approachable for even the most frugal gamers. Heck, I could afford one of them with the $1.50+ in Steam cash I got from selling the game cards for this game. For anyone looking for a fun RPG to blow a week or more playing, I would recommend this game! 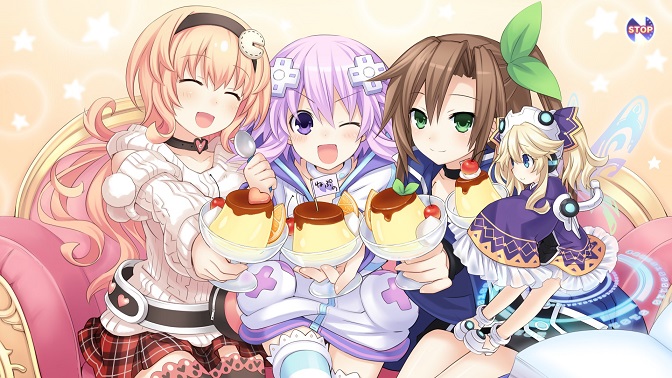