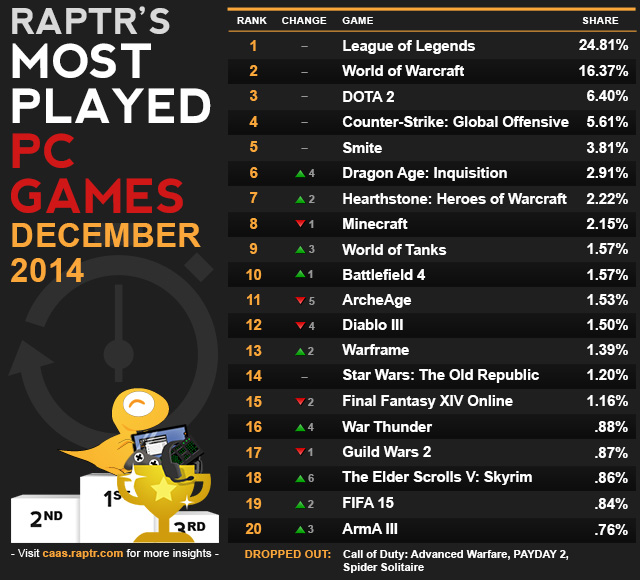 Once again, League of Legends has claimed the top spot in Raptr’s most played games list for December 2014. Several other games have climbed in rank, and here are Raptr’s full results:

League of Legends closed out 2014 in the top spot once again, up 30.09% in play time compared to November. Contributing factors included a big preseason patch, a “vault-clearing” Snowdown champions/skins sale, exclusive Summoner’s Rift icons, and a limited-time game mode called Legend of the Poro King.

World of Warcraft remained in second place in December. WoW was riding high on its Draenor expansion in November, and discounts along with holiday events continued the momentum and led to an impressive 9.94% boost in December.

Even though the Frostivus holiday event was canceled this year, DOTA 2 play time climbed 27.92% versus November. The mid-month Shifting Snows update was relatively minor, yet gameplay spiked significantly around launch.

Counter-Strike: Global Offensive had a 60.64% surge in December, thanks in part to a sale on Counter-Strike Complete (which includes several CS titles) and the reintroduction of the classic Train map, which was free for all CS: GO players.

Smite’s play time was up 21.45% compared to November. The MOBA introduced a new god in mid-December, but it was a limited-time bonus and all-gods-available-for-play event that saw game time peak at the end of the month.

December was Dragon Age: Inquisition’s first full month on sale, and play time has held strong after its mid-November launch. Total monthly hours were up 114.29%.

Hearthstone’s Goblins Vs. Gnomes expansion helped to move the game up two places in December’s Most Played, thanks to a 63.19% play-time surge.

World of Tanks and Battlefield 4 both rose in top 20 rankings as well as play time. World of Tanks (26.11% increase) moved up three spots thanks to Update 9.5, holiday events, and WGLNA Season 5 matches, which players could watch from the game launcher. Battlefield (24.38%) moved up a rank to close out the top ten.

ArcheAge and Diablo III were the only titles in the top 20 to lose play time in December. ArcheAge was down 22.15%, and Diablo lost 9.19%.

Star Wars: The Old Republic released Shadow of Revan in December and saw a 33.35% play time bump. The game remained in 14th place, however.

The Elder Scrolls: Skyrim, FIFA 15, and ArmA III all made a return into the top 20 for December. Skyrim, which soared six ranks, gained 78.25% play time. A major discount to the Legendary Edition of the game was the main factor in its return. In-game holiday sales and discounts to the title brought FIFA 15 back into the top 20 with a 50.34% increase. ArmA III returned to the top 20 with a 47.15% increase thanks to sales.