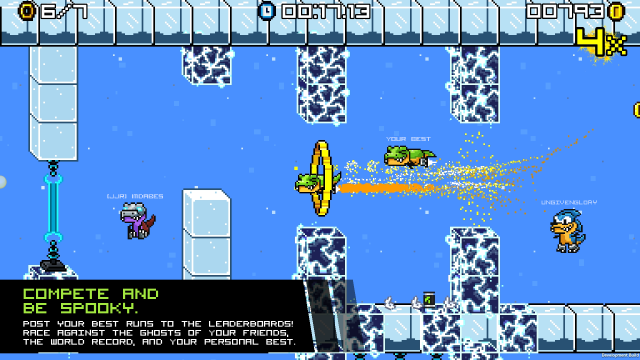 While many of us are in awe of fancy new graphics and enthralling worlds or big explosions, there are still a handful of games that go with a more simplistic approach that prove to be just as fun to play.  I’ve had my fun with “new” games that go old school such as the last few Mega Man games, any number of mobile games and the like.

I recently had the chance to play one of such games in JumpJet Rex, a 2D platformer with time-trial gameplay from TreeFortress Games.  You play as T-Rex, a cute, well t-rex that wears jump boots that allows him to dash, drop, jump and fly through the air, as he tries to avoid obstacles, while collecting coins and rings that open up further areas of any given stage.  The mechanics were quite simple, and after getting used to the controllers in the main menu, I was ready to take on a few levels.  I played a few different levels, ranging from challenge rooms, to a gauntlet, to a scrolling level, all while trying to complete them as quickly as possible.  That’s part of the charm, really, in that you can always go back to try and beat your own score, complete with a ghost player, as well as the times of other friends.  Your best times are uploaded online and you can actually compete against more than one ghost at a time. 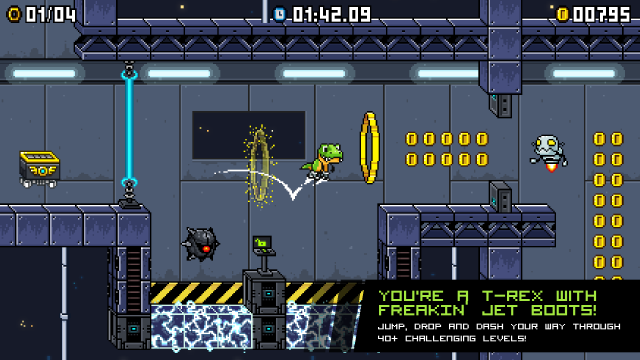 While playing, you have to be very careful, as T-Rex can die immediately from coming into contact with any obstacle, be it an enemy, or a spiked boulder, or a falling icicle. Enemies however can also be destroyed by using the dash ability, as you’ll run right through them. If you happen to die, you respawn pretty close to where you died, while the clock stops running, so you don’t have to fret if you die multiple times. As you progress through the world, you’ll also come across boss battles.  I managed to fight two separate bosses, which resemble a Mega Man boss battle. In my first battle, I had to battle this steel ball that rushed me, which I had to avoid, but also use my jump ability (which fires projectiles downward), as well as my dash attack to fend him off.  In another battle, I took on this large ice monster (sort of resembled a yeti) that lunged rocks at me, while icicles fell from the ceiling.  The battles get more and more difficult as you progress, but they all have strategies that you’ll need to figure out. 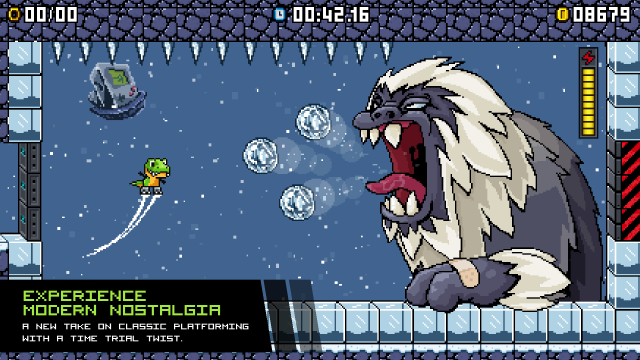 The game features over 40 levels and plenty of customization options.  There is a store in the game that allows you to pick up new boots, masks and skins, though these items won’t give you an advantage in the game, and are merely for looks. According to the devs, there are over 3 million possible combinations of skins! There are also plenty of collectibles throughout the game, which you can see in the game’s main hub.  The game is available on Steam via early release, which includes 10-12 levels, while the full release is expected sometime in March.  For those that get early access to the game, you can drop $10 for two copies, which will include the full game (after it’s available), or those that want to wait until March can get it for $15. There’s also going to be a bundle that includes the game’s soundtrack, which let me tell you, is pretty awesome, as it features all sorts of 16-bit inspired music that is sure to delight any gamer.

Bottom line, check this game out today – you won’t be disappointed.