A few weeks ago, I got a chance to play an extensive amount of Turtle Rock Studios’ upcoming Hunters vs Monster game, Evolve, and it remains to be one of my most anticipated games this year.  During that time, I got a chance to sit down with Turtle Rock Studios Producer Chloe Skew and talk about the game.  Now that the game has gone gold and we’re learning a few more details about the game, some coming up in the interview, now seemed to be as good of a time as ever to see what she had to say about the shooter.

David Poole (DP): So, Evolve, it’s actually one of my highly anticipated games of [this] year, I was kind of bummed out when it got delayed, but at the same time it needed a little more time, so that’s always worth it in the long run.  What kind of stuff was influenced from Left 4 Dead into Evolve exactly?

Chloe Skew (CS): I think that Phil [Robb] and Chris [Ashton] have a real passion for making games, and I think that’s something you feel when you play both Left 4 Dead and Evolve, I think they have a similar spirit to them. The idea of cooperation, you know I think that the four-v-one where you had four of the Left 4 Dead survivors and the Tank, that was sort of the early test phases of like “hey maybe we can make a whole game out of this”, cause they had the idea for Evolve before Left 4 Dead, but the technology wasn’t really there until this current generation of consoles, because you can’t have a monster trying to hide and Phil reached “is it really getting rendered properly?”, so we really needed that lush environment that we get with CryEngine. 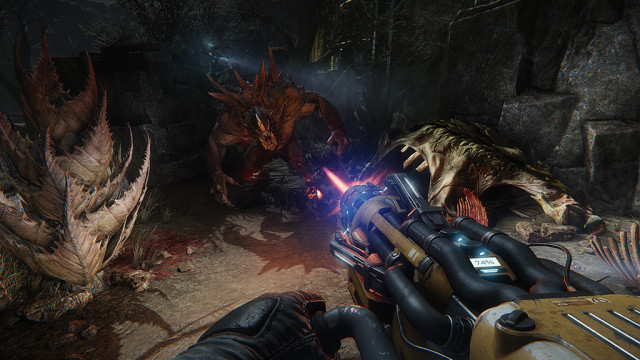 DP: Okay, so we have three monsters now with the Wraith revealed, and then there’s a fourth monster coming that’s downloadable content later on?

DP: Yes, okay, is there anything we can hear on that?

CS: Well we just had a “Name the Monster” competition, and we didn’t give people very much.  We gave them a silhouette and a size comparison so you can see he’s kind of the same size as Goliath, but wider, so that’s pretty exciting, I don’t think we’ve announced which name won yet, so he remains nameless.  [Behemoth has been revealed as the fourth monster!]. We’re really excited, we’re obviously still in the thick of working on him.

DP: And he’s releasing after the game launches or during the launch?

DP: Is there any monsters planned after the fact?

CS: Well, you know Phil and Chris have been working on this game for three, almost four, years, and we had an extraordinarily creative team, so there’s tons of ideas that have been floating around, things that we tried out early on in development that we could’ve figured out the mechanics of.  There’s plenty of ideas that exist, so we’ll have to see if people like the game enough and want to support us making more monsters. 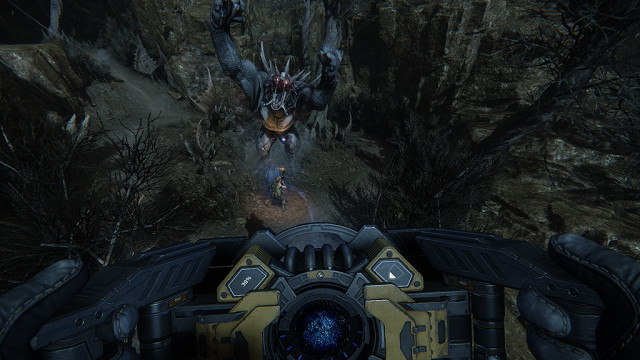 DP: Well I think that a lot of fans will definitely support it, you guys are definitely being very good to the fans.  I saw that you announced all the downloadable content maps are going to be free, so that’s a good move on your part.

CS: Well Phil and Chris are gamers, and they understand what gamers want, and if we can make these games and not charge people for them, they would totally do that, but unfortunately making monsters is not only a super time-consuming experience, it’s also very expensive, cause you have so many people involved in just one monster.  They didn’t want us to put things behind a pay-wall, if your friend buys all the hunters, and you don’t because you’re in college and you don’t have any money, you guys can play together with two bots, and you can hot-swap, so you can still swap into that character that’s paid DLC that you may not have bought, because your friend has it and you’re playing together.  It’s pretty cool, you can still have all the functionality of the game, it’s not going to shut you out just because you haven’t bought the DLC. 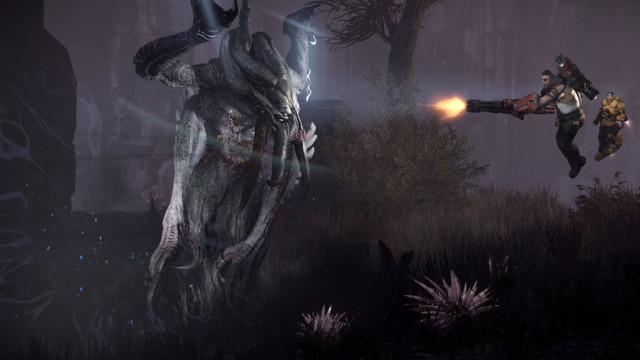 DP: Speaking of the monsters and the hunters, do they feel that the overall gameplay is completely balanced or do they still want to wait on feedback from other players post-launch?

CS: I feel like because of the nature of the game, we can only get it to a certain level of balance, and once it’s out in the wild, people will come up with new strategies, people will put hunters together and combo abilities in a way that maybe we haven’t even thought of yet, so it’s definitely something we’re planning on being active on once the game launches.  There will be patches, there will be tweaks to things that we see at the telemetry like “oh, Wraith wins one-hundred percent of her games”.  First of all, that would never happen, because in the studio we tried to get it fifty-fifty pretty consistently, but we’re going to be paying attention to it, we’re going to keep balancing because it’s a lot of things to balance, asymmetrical gameplay is harder, so we’re going to get it to as close as we damn-near can, and then we’ll listen to the community feedback and continue fine-tuning it.

DP: Okay, so we already know there’s a fourth monster on the way and potentially other monsters, are there going to be more hunters after launch? [Yes, there are!]

CS: We haven’t announced any hunters for DLC yet, but there’s a lot of ideas floating around just like with monsters, so we hope!  We want people to want more. 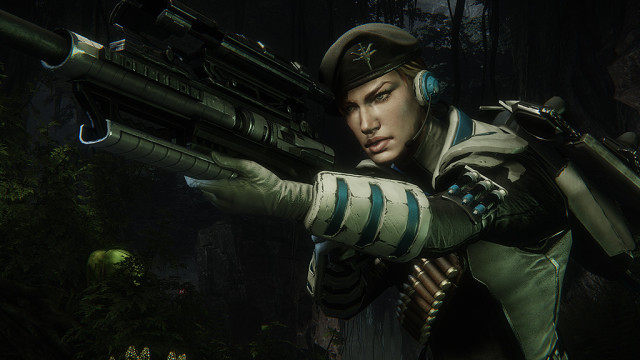 DP: Okay, so obviously it’s a little too early to discuss anything about sequels, but it seems like you guys are at least dedicated to supporting this game for quite a long time.

CS: Yea, absolutely, I mean Phil and Chris, they do have a lot of ideas, our team is amazing and they work very well together.  We’ve had a lot of recognition, a lot of people really excited…but it needs to translate into people buying the game and people sticking with it, and I think it’s a game that’s incredibly replayable, so hopefully lots of people agree and we’ll get the fan community asking for more, and I think we’ll be only too happy to give them that.

DP: I was having a lot of fun playing Evacuation and even playing Solo mode, I’m glad that there is going to be a solo player experience in the game, especially now with the next generation of consoles, there are a lot more games out there that are practically just online-only games and no single-player content.  Are there any additional modes that are going to be worked on for Evacuation or just in general?

CS: This [Hunt, Rescue, Nest, and Defend] is it!  These are the modes that we have.  I have no idea if something maybe down the road, maybe Evolve 2 [laughs].

DP: But this is the plan?

CS: This is what we have for launch, and Evacuation feels complete, starting with Hunt, ending with Defend, having that Nest and Rescue difference in between.  It works, I think it’s a lot to chew on for people, and it takes a long time to kind of get the hang of it and really start to work on building up your skill level, so I think there’s a lot there. 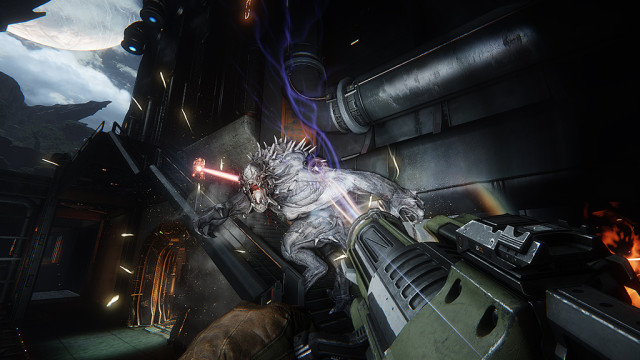 DP: Definitely, so I know just from myself playing the Alpha and playing [the game] just now, I know that building up those skills, earning more experience, leveling up your characters to level 40, there’s a lot to unlock for all the different classes and all the different characters.  Do they feel pretty complete, or are their unlocks to be released later down the road with additional content?

CS: Uhm…That’s a good question, I haven’t thought about that.

CS: Yea, it’s something we’d probably be open to if a bunch of players were like “hey we want more of this”, we’d be like “okay, I guess we can figure out how to do that”, but I haven’t heard anything about doing that yet.

DP: Right, and one of my last questions, so the open beta is in January.

DP: So like I said, I myself played the Big Alpha on the PlayStation 4, and I know that was a bit of a…

CS: A little bit of a bumpy road.

DP: Definitely.  Are you guys going to take more precautions on trying to prepare for the open beta just to get a better impression from a lot of the fans?

CS: Well we’re aware that it was a super frustrating experience for PlayStation players, and we hated that.  We got kind of blindsided by that 2.0 upgrade that broke a bunch of stuff, not just our alpha, and we learned so much from that.  I mean the people that did get to get in, did get to play, all the bugs that were submitted from that, we went through it all and were like “Oh, okay!”.  So we learned a lot and we’ve been obviously implementing all these changes and trying to strengthen everything, because day one we want the game to come out and run, and be amazing for everybody.  That’s why we’re trying to do these big scale tests, so we can have a flawless launch.  We do work with Microsoft and we have the open beta that’s exclusive to Microsoft Xbox [One], but we’re not forgetting about anybody else, and we will be equal to supporting PC and PlayStation as well.

DP: Okay, well I’m definitely very much looking forward to it, and I was a big fan of Left 4 Dead as well, so I definitely support you guys and I can’t wait to see the full game and get a chance to play it.

DP: Alright, thank you for your time!

Evolve goes into open beta exclusively on Xbox One on January 15th, and releases this year on February 10th for Xbox One, PlayStation 4, and PC.