Destiny: Hopes for The House of Wolves DLC 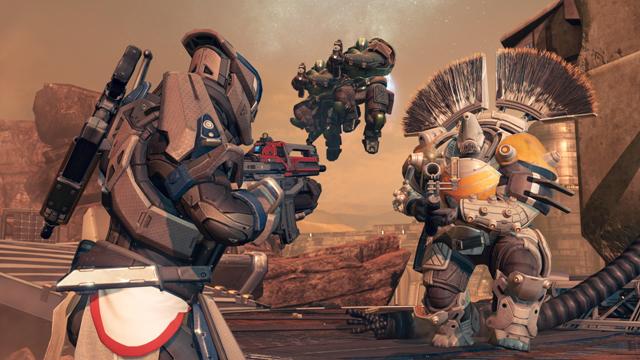 It has been about four months since Activision released Bungie’s highly popular new online first-person shooter, Destiny. The game has achieved some massive runaway sales success. It even got its own original single from Beatles legend Paul McCartney, which is about to go vinyl. Last month, Bungie released the game’s first stand-alone expansion pack, The Dark Below. The new expansion pitted the Guardians against the Hive and the alien race’s ghastly alien leader, Crota. The next expansion, The House of Wolves, is due out two months from now. The House of Wolves is certain to involve the Hive. The Queen of the Reef, whom the main Guardian player encountered in the original story missions at launch, will likely call in a favor to the Tower, for assistance in a conflict against the alien race called the Fallen. Just as I wrote an earlier column about The Dark Below, I want to discuss my hopes and expectations for what is in store for the next DLC release.

Last week, there was actually a news leak for Destiny expansion and release plans from Bungie HQ (via Planet Destiny). The image leak hinted at the release date and what will be included with the new expansion pack. If players are to believe the leak, The House of Wolves will feature three new story missions, four new Crucible maps, one new Strike mission and one new player Raid. Unfortunately, The Dark Below did not answer some of the major criticisms against the game, but it did offer some more fun play experiences. In terms of story, Destiny is lacking. However, The Dark Below does provide more backstory regarding the hierarchy of the Hive. A new Tower ally character, Eris Morn, was introduced. Most of The Dark Below focuses on her story and the failure of her crew to destroy Crota. I enjoyed the new Strike missions with The Dark Below. For the Crota’s End Raid, I generally found loot drops more rewarding.

Due to the format of The Dark Below, I do not expect any major storyline breakthroughs for The House of Wolves. I am guessing the Guardians will have an emissary from the Queen of the Reef to report to–similar to the Queen’s Wrath events post-launch. Through the emissary, the Guardians will probably go on missions to hunt down and kill some rogue Fallen aliens or eliminate a Fallen threat. However, the way some of Eris Morn’s quests were set up provides a nice change of pace. So, I would not mind if missions for The House of Wolves follow a similar format. For example, I would like a series of missions that would lead to obtaining some type of Exotic gear or a Legendary weapon.

Since launch, Bungie has fixed some major issues to improve the playability for the game. There are now optional chat features for the game. Resource materials can be purchased from the Crucible and Vanguard quartermasters in the game. The problem? In the past, players could exchange resource materials in bulk in exchange for Crucible marks. Now, the system works in exactly the opposite fashion. I believe you should be able to still trade in materials for marks. In fact, Bungie still needs to figure out trading between players. I see no reason how trading items would hurt the spirit of the game. Item trade could actually greatly improve the game.

Loot drops got better with The Dark Below. Engrams are less random now. A Legendary Engram will not draw a rare item anymore. That is good. However, loot drops are still way too random. The House of Wolves needs to drop this already. Players can go through playing Vault of Glass too many times and get nothing. This is why players look for Treasure Caves and various exploits. That happens because the game is frustrating and cruel to play. You play to get Raid gear to level up your character, and then are rewarded with a useless ship design that does absolutely nothing. Why should a player brave Atheon if that player will only get a useless shader or pointless ship design? Therefore, House of Wolves must improve the loot drops. Beating a Raid in House of Wolves or certain areas of the Raid should guarantee a certain item. Players should have more incentive to beat the Raids.

Bungie needs to focus more on fixing bugs and glitches than repairing exploits and cheese techniques. For one thing, cheese techniques are not so bad. I believe they represent certain ingenuity and dedication to the game. These exploits or ways to cheese the Raid are really just strategy and different ways to beat the game. Do I agree that it is not really in the spirit of the game for someone to disconnect an ethernet cable?  Yes. I believe fixing a glitch that helps players beat the Raid is fair. However, there are also glitches that cheaply defeat players and do not get fixed.

As I mentioned earlier, I am not expecting big story or cutscene breakthroughs for The House of Wolves. However, I spoke to Bungie’s Eric Osborne last month at the PlayStation Experience. When I asked Osborne about the story criticisms against the game, he stated, “We absolutely hear their criticism with the stuff they’re talking about. It’s a something that’s top of mind for us. So, certainly as we’re creating content and moving forward, that’s something we’re looking forward to addressing.” It is probably unrealistic that there was enough time to make some major storyline changes that will be incorporated into The House of Wolves. However, based on Osborne’s statements, one hopes that is something Bungie will address in the future. In the case of the House of Wolves, it would be nice to find out the secrets of the Awoken and the Queen of the Reef. I want to know what happened to the Awoken at the edge of the Collapse. Why did some of the Awoken return to Earth to remain loyal to the City and the Traveler when the Queen of the Awoken is somewhat ambivalent and lives in a sort of self-imposed exile? The expansion does not have to answer all these questions, but it would be nice to receive some hints or suggestions.

The House of Wolves DLC is expected for a March 10 release. Destiny is currently available for the PS4, Xbox One, PS3 and Xbox 360.