Earlier this year, Nintendo revealed that Captain Toad, star of the bonus stages of Super Mario 3D World, would be getting his own game.  Considering it was a minor part of the game, it was difficult for some to think a full title based on that concept could carry itself.  Well to anybody that is on the fence to pick up the little guy’s own title, feel confident in the fact that Captain Toad: Treasure Tracker is a brilliant game of its own merits.  Despite being a puzzling platformer where your main character cannot jump, the game is full of depth and creative charm that far exceeds those of the original bonus stages from Super Mario 3D World, and even manages to throw a couple surprises in the mix. 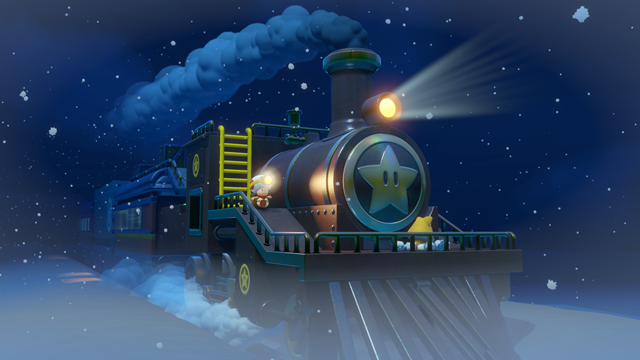 The game is mostly played on small levels, usually in the shape of a cube (though some stages are more complex than that), where the player is tasked with controlling Captain Toad through various obstacles. These obstacles could vary from things such as a barrage of Bullet Bills, a rising pool of lava, or even “mummified” versions of Captain Toad himself. The player will use the right joystick or the Wii U Gamepad’s gyroscope sensor to rotate the stage, allowing one to uncover hidden areas and secrets, as well as revealing the path forward in many situations. Using this mechanic, Nintendo has been able to bring a fun yet inventive level design to this lighthearted adventure, with just enough challenge to make finishing a stage feel rewarding.

Unfortunately, the gyroscope control cannot be turned off, so it does make it a bit frustrating if you move the controller around at certain moments. Despite that, the game has over 70 levels, each adapting the player to the mechanics of the gameplay, and preparing them for each new stage unlocked. The goal of each stage is to get to the Star, though players will also be encouraged to collect three Super Gems in each level, these gems necessary to unlock later stages in the game.

After completion of a stage, a special objective will be revealed, which may or may not have been achieved on the first playthrough, but if not, then it encourages replay value and even thinking outside the box in some situations as to how to complete the objective. It also encourages more exploration, as many stages will ask for players to find a hidden Golden Mushroom, the Wii U gamepad vibrating when the Captain gets close enough to it. There will also be stages with a special objective requiring one to get a certain amount of coins, making it so players will have to literally track down every coin they can possibly get to, all while trying to survive the perils Captain Toad faces. It really adds a lot to the game and makes it last a lot longer than one would expect in a title with such a simple concept. 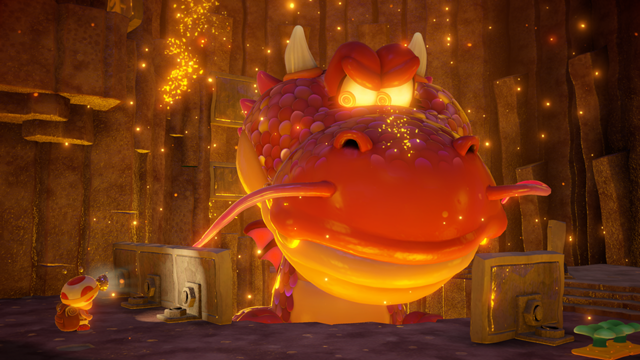 Captain Toad himself is very limited in his abilities. He’s able to pull turnips from the ground and throw them at enemies, and from time to time, a pickaxe power-up will allow him to wreak havoc on his foes. Otherwise, it will be up to the player on how to overcome each adversary, often requiring the use of the stage itself. Some stages will have the player ride in a mine cart, using the Wii U Gamepad’s screen to see in a first-person view to shoot turnips at objects and enemies in a way that feels remarkably similar to the N64 classic Pokemon Snap. It brings a nice change to the typical gameplay style and helps keep things fresh across the multiple stages.

The story is played out like an adventurer’s journal, as Captain Toad and even Toadette will journey to collect treasure and defeat the evil Wingo over the course of the game, filling up pages with photos of the adventure.  Every so often, the game will take little “breaks”, where there will be no special objective, no obstacles, just a nice relaxing moment, giving players an opportunity to take in the beautiful and colorful visuals this game offers.  Much like Super Mario 3D World, this game, while simplistic, looks great, which can only be thanks to the charming visual style of the Super Mario series. Beautiful sunsets, rich colors, and magical looking effects are sprinkled throughout the roughly 10 hour quest, and even during those moments when it gets frustratingly hard, one can’t help but feel motivated to keep going to see the next wonderfully crafted stage. 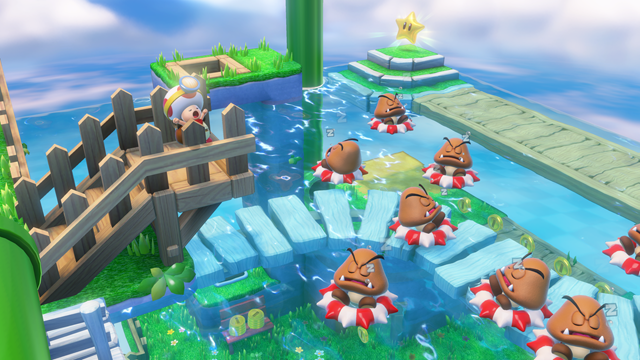 The music is probably the weakest element of the game, though that’s not to say it isn’t good. While it may not be at the level of Super Mario 3D World or even Super Mario Galaxy, each track matches up to the stage wonderfully and keeps the tone of the game consistent. Ghost themed levels will often have a feeling of caution relayed through the music, all the while Captain Toad will shiver in fear during idle moments. Captain Toad and Toadette themselves bring a lot to the game, being easily some of the most adorable protagonists found in any game. Their actions, personalities, the “help me!” shouted as they are pursued by a persistent Shy Guy…it’s all icing on top of the cuteness.

While the game may not appeal to everyone, especially those looking for a bit more action or a faster pace, Captain Toad: Treasure Tracker delivers an endearing experience that makes it easy to unwind despite utilizing the problem solving portion of one’s brain.