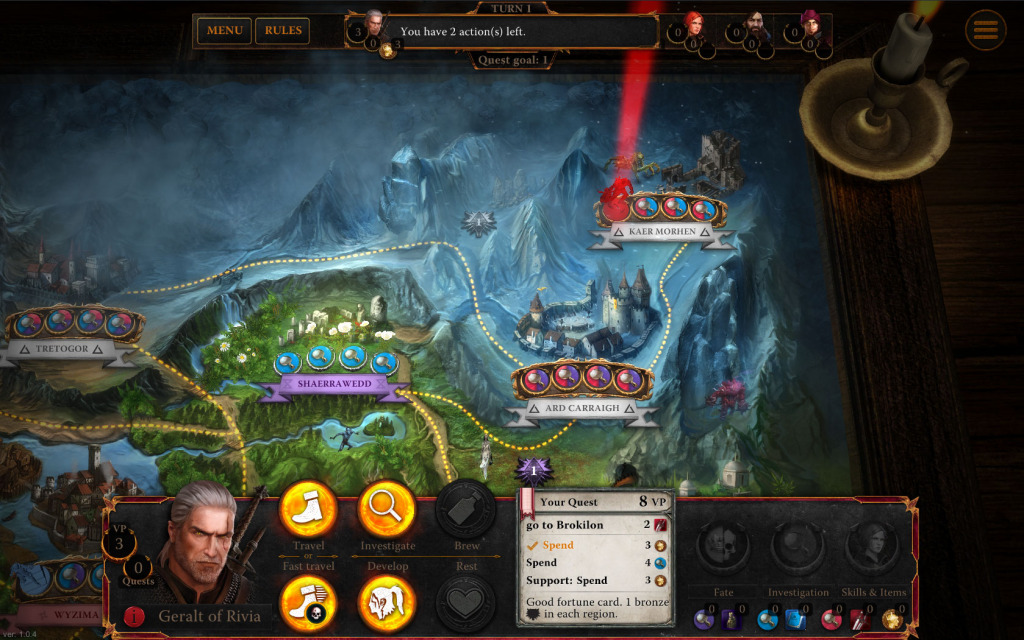 With The Witcher 3 delayed to May 2015, there’s an still an alternative for those still itching to play: The Witcher Adventure Game, a digital board game (which seems to be all the rage now) that allows you to play as four unique characters from the series. Although it has a online matchmaking component, I couldn’t seem to connect to anyone, but you’re still able to play the game offline, with the choice of playing against computer opponents or grabbing three friends to huddle around the screen.

While there are only four characters to choose from – Geralt, Triss, Dandelion, and Yarpen – each of them have their own unique abilities that complements their playstyle. Geralt and Yarpen are the physical damage dealers who are more suited for engaging in fights, while Triss needs to use her magic spells in any fights she gets dragged into, and Dandelion is better off avoiding them entirely and focusing on getting out of situations using diplomacy. Fights are engaged by traveling over the bright and colorful map as the character token travels city to city to fulfill side-missions and tasks to earn Victory Points, all while attempting to solve a main quest given at the beginning of the game. Each game is guaranteed to be different and unique, requiring the player to plan strategically on how to complete their quest while also accumulating the most VP, all while trying obstruct their opponents, either throwing monsters in their path or disabling their actions. Needless to say, this can happen to the player too.

But not all is perfect in The Witcher Adventure Game. While the game gives you a quick introductory video on how to play in the beginning, to fully understand how to utilize each character’s skills and abilities, a thorough reading of the rules is highly recommended. While most of the gameplay is quite easy to figure out, it can be a bit frustrating trying to figure out how to trigger an action if you’re trying to play by the seat of your pants. I made that mistake in my first game and having picked Triss, I couldn’t understand why I was having such a hard time in battle or couldn’t activate the magic spell cards I had drawn. 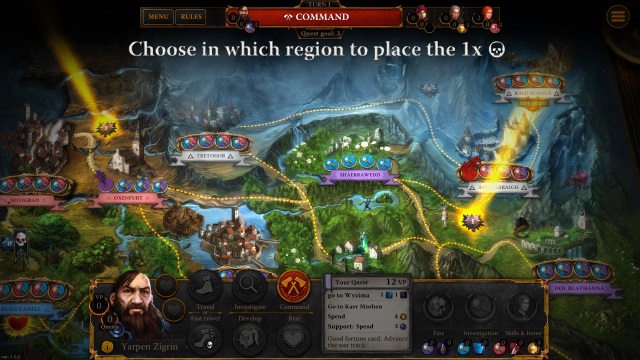 Visually, the game looks great or as great as a digital board game can be. While it’s not going to be pushing your graphic card to the limits, the board map is bright and colorful, with goblets and tableware placed at the edge of the map, adding a nice touch. The music shifts through several tracks, providing a nice background sound that adds that fantasy touch as if you’re playing in a medevil inn, all while not being too intrusive or drawing attention to itself.

All in all, it’s a pretty solid board game that’s not too complicated although a little light reading is required. While it could be streamlined a little (Why do I have to drag my dice every time? While it starts off fun, it just grows tedious as the game goes on.) and a be made a bit more intuitive, it is a pretty engaging game, although I wouldn’t say it’s a must-have unless you’re a fan of the series or if you enjoy a well-thought out fantasy board game. And honestly, at $9.99, it’s cheaper than most actual, real-life board games and takes up less much space in your room unless you’re running some sort of monster desktop setup.