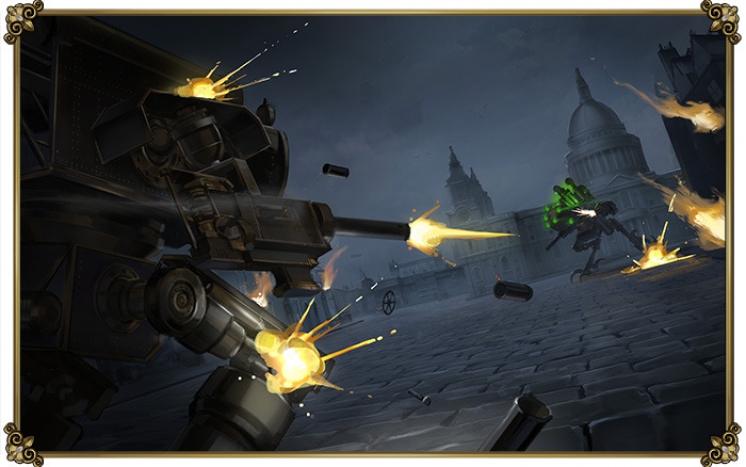 Last week Dreadbit Games revealed a bit of information about the weaponry found in Ironcast. They spoke of the Light Cannon, Energy Lance, and Pulse Repeaters, which were compared with each other. You can find that post here. This week, Dreadbit has decided to wrap up the weaponry revelations.

First up is the Missile Launcher. The first weapon Dreadbit spoke of introduces the concept of splash damage. “The missile launcher hits a primary enemy system for a decent amount of damage,” the developers state, “with a smaller amount being applied to the other 3 systems as a result. All of this damage is subject to reductions from enemy shields, so when an enemy has a particularly strong shield active you’ll often find that only the primary hit location takes any damage from this weapon.”

The next weapon they spoke of is the Shock Coils. This weapon will be used in many of the same situations as the Energy Lance, namely when the enemy has strong shields. “Unlike the Energy Lance,” the developers warn, “the weapon is not very consistent. Sometimes it can be much stronger than the Lance. Sometimes, weaker.”

“To make up for those weaker shots,” they add, “the Shock Coils do also come with a token amount of splash damage, to represent lightning arcing from the armoured panels of an Ironcast.”

They moved on to speak of the Shotcannon, which they describe as a gigantic blunderbuss. It will fire dozens of heavy shot balls out of its barrel, thus causing the largest average damage out of all the weapons. Before you begin thinking that you should always pick this weapon, however, you should keep in mind a certain drawback. “Unlike most weapons,” Dreadbit explains, “the Shotcannon cannot target a specific location on the enemy Ironcast; it’s damage is 100% splash! This means that while you’ll generally kill your opponent faster with a Shotcannon, you won’t be disabling systems like other weapons would do. Your opponent will be at full efficiency until collapses into a smoking heap.”

The final weapon in the game is none other than the Heavy Cannon. As the name implies, it’s a stronger version of the Light Cannon, making it a fairly multipurpose gun. It is just about strong enough to penetrate shields, and fires enough shots to damage unshielded enemies.